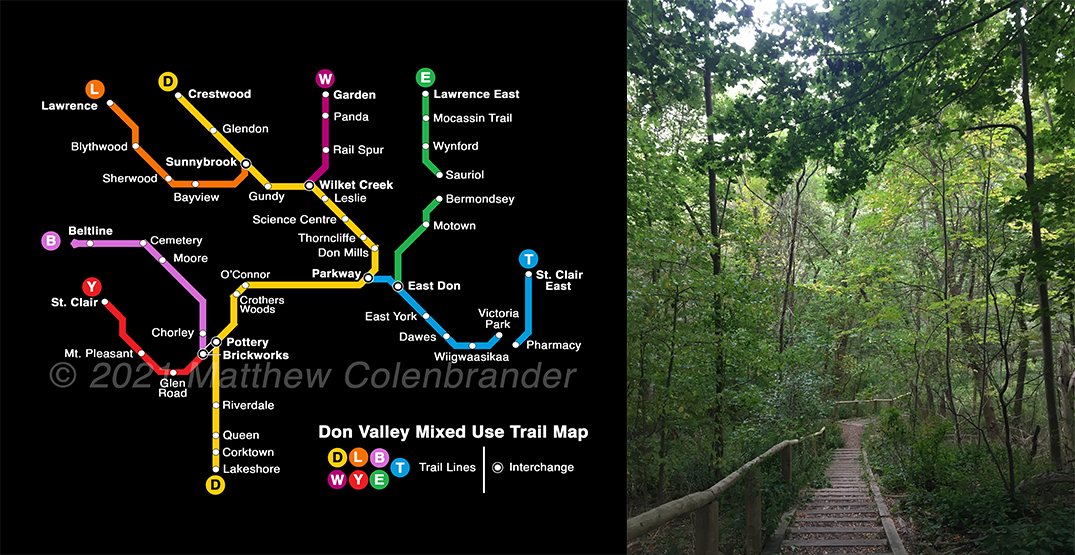 A graduate student in Vancouver who was homesick for Toronto used memory and Google Maps this winter to create a subway-style map of the Don Valley trail network.

Matthew Colenbrander grew up riding his bike through Toronto’s ravine trail system and wanted to make the urban forest trails accessible to more people by creating a simplified map.

“I want everyone to be able to experience these trails,” he told Daily Hive in a phone interview. “But there are barriers to accessing the Valley. Some of them are physical barriers. Others are just a lack of signage or a lack of comprehensive mapping that really makes sense to people.”

He chose accessible and easy-to-find trail exits and entrances to make the stations on his map, although many smaller ones exist that may lead into someone’s backyard or a small residential street.

Colenbrander knows the network better than most after spending summers as a cycling camp instructor and commuting on the trails to a job in the city’s East End.

He’s doing a Master’s degree at the University of British Columbia, and since he couldn’t go home during the winter break spent his time creating an easy-to-use guide for others looking to get to know the trails.

“A lot of people will know the ravine next to their house,” he said, but not realize the trail can connect them with others to navigate the city.

Vancouver’s network of cycling paths have very clear signage, Colenbrander said. He wishes Toronto’s ravine network was as easy to use for the average person.

“I want the paths to be packed all the time,” he said. “I want people to feel like it’s the part of their lives and the conservation efforts those are important.”

The City of Toronto’s ravine strategy prioritizes environmental protection, investment into trail upkeep, using ravines as a way to connect people with nature and with the larger city, partnering with community organizations to enhance the ravines, and celebrating the benefits ravines bring neighbourhoods.

Colenbrander added his map only covers the Don Valley trail network. There are also extensive trail systems along the Humber River and into Scarborough. He chose to map east Toronto because it’s the area he knows best.