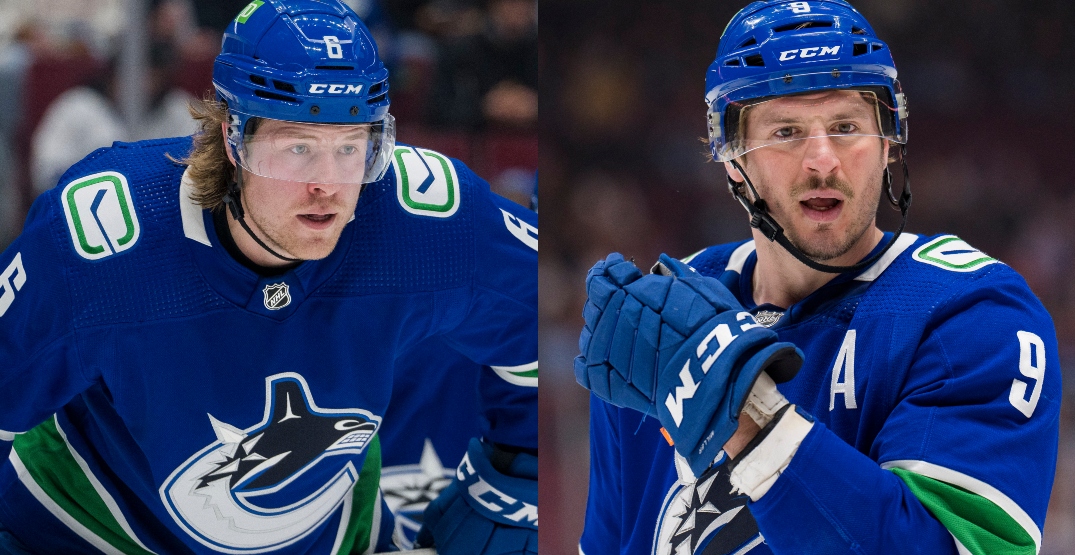 With the NHL Draft now just 16 days away, trade season is just around the corner.

It’s expected to be a busy offseason for the Vancouver Canucks, who are looking to clear cap space and build a team that can one day compete for the Stanley Cup.

Elias Pettersson, Quinn Hughes, Bo Horvat, and Thatcher Demko appear to be safe bets to return next season, as John Shannon noted earlier this month. But everyone else? Well, it appears that Jim Rutherford, Patrik Allvin, and the new Canucks management team are quite open to listening to offers.

According to TSN’s Darren Dreger, two Canucks players, in particular, are generating “strong” interest around the league: JT Miller and Brock Boeser.

“It seems like it’s open season for the Vancouver Canucks. It’s not a fire sale, so don’t misunderstand that, but we’re talking about JT Miller and we’re talking about Brock Boeser… There is strong market interest in both those players,” Dreger said on today’s edition of Insider Trading.

“The Vancouver Canucks are interested in listening… but the Canucks aren’t just in the market for draft picks. They need good young NHL players in return.”

“It’s open season for the Vancouver #Canucks…there is strong market interest in both of those players. The Canucks are interested in listening…they need good, young players in return.”@DarrenDreger (@rayanddregs) on JT Miller & Brock Boeser. pic.twitter.com/6yGIKCJqUC

Daily Hive asked Allvin last month if the Canucks would be willing to take a step back in order to get better. He wasn’t exactly on board with that idea.

“I don’t think you need to do major changes. Obviously, we want to get better. We’re open to discussions with other teams, and free agents, and see how we can improve our team… I don’t want to just get rid of cap, just to create cap space, I want to improve our club to get better next year.”

Still, the Canucks management does appear eager to make significant changes this offseason.

When asked about Miller during an interview on Sportsnet 650, Rutherford said the team would be prepared to make a “non-emotional decision” on him this summer. The 29-year-old is under contract for one more season with a cap hit of $5.25 million. He’s due a big raise in 2023 and can begin negotiating a contract extension this offseason.

“He’s coming off a career year, he’s a very good player, players like him are hard to find that can put up points and they’re strong, they’re physical, and things like that,” Rutherford said last month. “But we’re going to negotiate with his agent this offseason, and we’re going to negotiate that works for the Canucks, not only for now but long term. If both sides can come to an agreement, then JT Miller will be here long-term.

“If the numbers get out of whack, then we have to make a non-emotional decision and make a tough decision that won’t be popular with anybody. And try to get assets that are going to help this franchise long term.”

Boeser, 25, is four years younger than Miller but is a pending restricted free agent that needs a new contract this offseason. Rutherford told Sportsnet the Canucks are prepared to pay Boeser the $7.5 million qualifying offer required to keep him, and that’s what he’ll count against the cap unless a new multi-year deal is struck.