The inaugural event will be held on Thursday at the historical Imperial, a former theatre recently restored into a multidimensional space and located in Vancouver’s urban core. The venue’s theatrical roots make it an apt choice for housing the musical affair, with its newly installed sound system hailed as one of the best in the world.

Of course, a celebration of the power of music wouldn’t be complete without its melodic counterpart. Hosted by Prevail of Swollen Members, Strike A Chord will feature an array of live performances from some of Canada’s most talented artists including the Matinée, Kutapira, Chin Injeti, Omar Khan, the Boom Booms, DJs Sincerely Hana and Rico Uno, and Serena Ryder.

Music Heals supports a wide range of music therapy programs in British Columbia and across the country, funding its increased access in children’s hospitals, senior’s centres, AIDS and HIV programs, and more. Some of the non-for-profit’s current initiatives include the Bandwagon, a unique mobile recording studio specifically designed to assist music therapists working with patients at bedsides, and the iPod Pharmacy, a project that supplies donated MP3 players to music therapists in the Lower Mainland for use with their patients.

With its wonderful cause, dedication to the community, and radio station LG 104.3 FM’s recently announced long-term sponsorship, Strike A Chord is poised to become one of Vancouver’s premier, and most heartfelt, events.

Strike A Chord: A Benefit For Music Heals takes place on Thursday, October 23, 2014 from 7 p.m. to 2 a.m., at the Imperial. Tickets are available online. 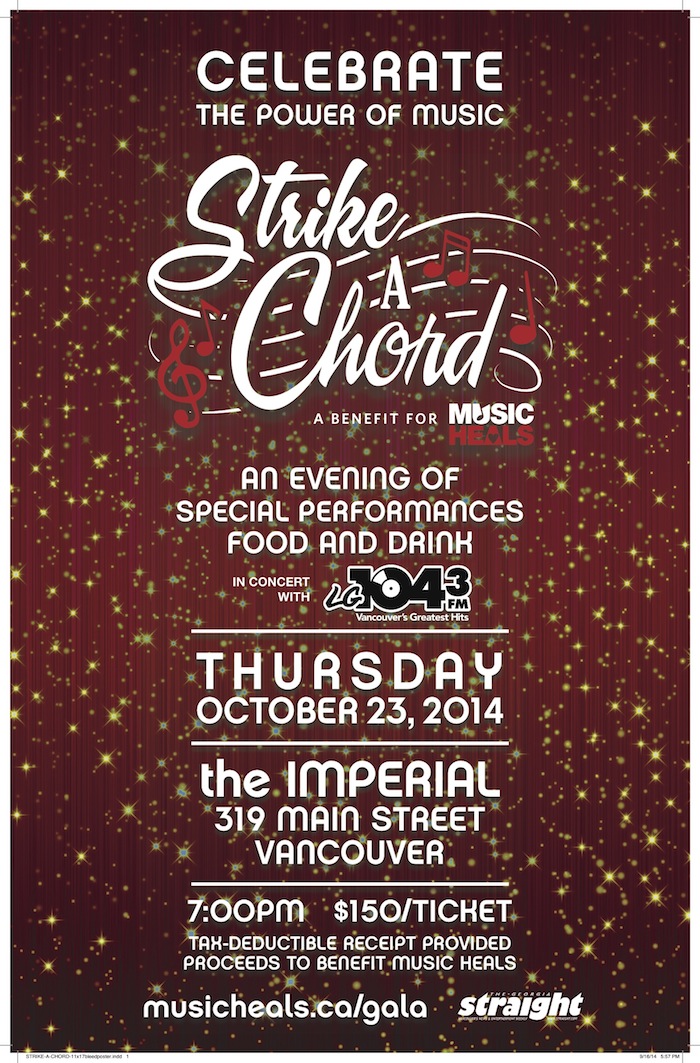