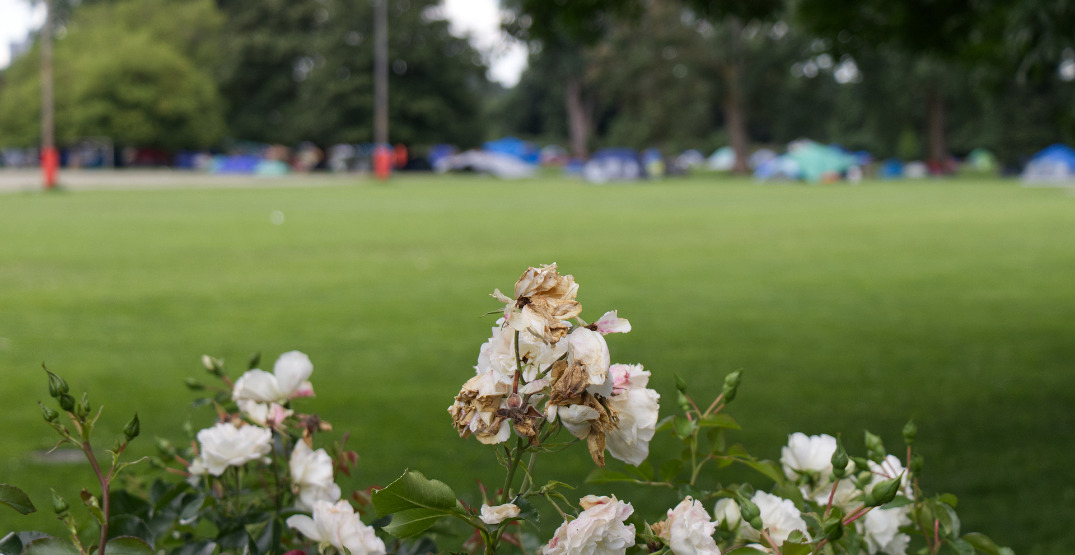 Strathcona Park with the encampment in the distance. (Margarita Young/Shutterstock)

It’s been a long journey for people living in the East Vancouver community of Strathcona, but the Vancouver Park Board has announced that Strathcona Park is finally reopening to the public.

The remaining fences that are still in place on the east side of the park will be removed beginning today.

Work is expected to take a few days to complete, but the park will be open for public use while work is underway.

After a long saga with a homeless encampment that involved injuries, and a death, the entirety of the park will soon be accessible once again.

Strathcona Park was initially closed in May for remediation, following the closure of the encampment onsite. The west side of the park was still open during this period.

We are pleased to announce that Strathcona Park is reopening today. Although it may take crews a few days to remove all the fencing, the park will be open for public use while that work is underway. https://t.co/vpWxKwHeqp pic.twitter.com/I4hlfkh1nN

The remediation work included removing turf and gravel surface areas before they were replaced, as well as levelling and maintaining that area until it was ready for public use.

Crews also did some additional work, like replanting trees.

“We know this park is integral to the community, and we are pleased that this will once again be a space to socialize and connect with one another,” said Donnie Rosa, General Manager, Vancouver Board of Parks and Recreation, in a statement.

Officials at the Vancouver Park Board will be engaging with community partners on expanding programming at the park, but also supporting community-led gatherings and activities to bring people back.

Off-leash dog amenities in the park will also be on a list of priorities for park board staff.

Another portion of Strathcona Park, the all-weather sports field, will soon be reopened for permitted activities. Groups can book sessions for the start of November, but all other sports fields in the park are going to stay closed for organized play to allow the newly installed turf to take root.