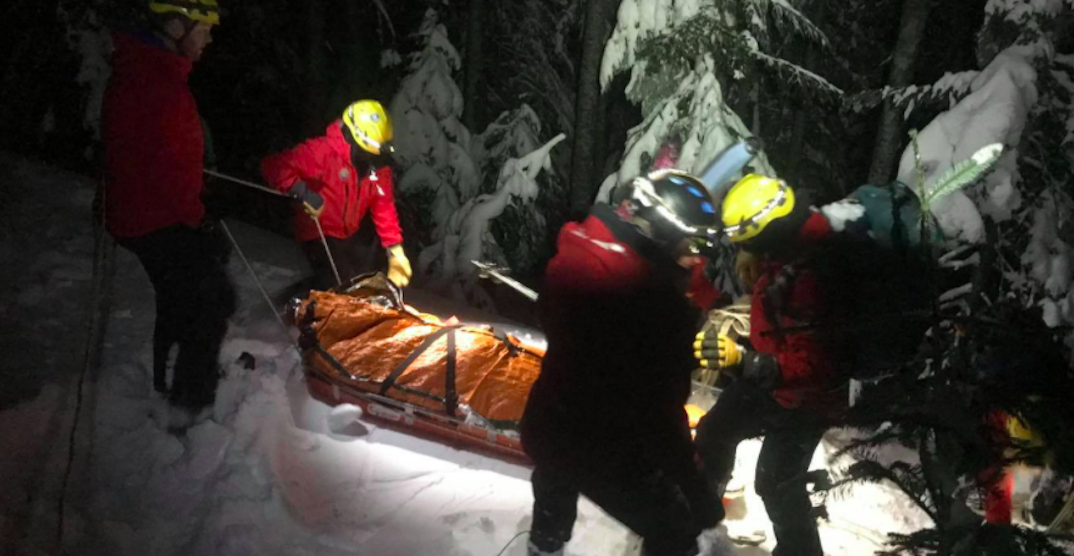 The dramatic rescue of a snowboarder who was caught in an avalanche on Tuesday after snowboarding out of bounds near Cypress Mountain has those involved reiterating warnings about the consequences such actions can entail.

According to North Shore Rescue’s Peter Haigh, who managed the search, the rescue operation began around 3:45 pm, when his team was notified by BC Ambulance that an out-of-bounds snowboarder was on the backside of Mt. Strachan, when he was caught in an avalanche and carried into a tree near Mitten Couloir.

Following the slide, the snowboarder phoned his girlfriend to inform her of what had happened.

“The subject was described by his girlfriend as having been hit by an avalanche and thrown against a tree, subsequently hitting his head, his shoulder and was stuck in the snow,” Haigh told Daily Hive. “That’s really what we had to go on.”

And after initially being given incorrect coordinates, Haigh said his team was able to make contact with the subject via text message and determine his exact location.

Because of the high avalanche risk, however, rescue crews had to be led into the area by a guide who was also an avalanche forecaster.

Initially, crews thought they might do a chopper-assisted long-line rescue, but they were unable to spot the subject from the air at first due to the dense trees.

On the second flyover, however, and with the daylight fading, they spotted the subject, who by this point had freed himself from his board and was “sitting in the middle of a big open avalanche chute,” said Haigh.

The first team of rescuers reached the snowboarder and “got up to an area of trees near him with the intention of getting him to come to them in an effort to expose the fewest people possible to the avalanche danger,” said Haigh. The snowboarder “refused” to do this, though, “so it took a bit longer to put our members in location, so that one of our guys could go across, get him, and bring him back to the safety of the trees.”

The snowboarder complained of being cold “right from the get-go,” and initial assessment showed the potential for serious injuries particularly in the leg, hip, chest, and arm areas, said Haigh. And while the snowboarder was conscious when rescued, the fact that he had hit his head meant that while he was awake, “he wasn’t fully responsive.”

The snowboarder was for hypothermia and pulled out of the area via stretcher.

“We eventually got him … to the waiting ambulance just before 10 pm,” said Haigh, noting the operation was slowed somewhat by factors such as adhering to COVID-19 protocols, as well as the avalanche danger in the area.

“We’ve always got to ensure the safety of our own members first in these situations,” he said.

Reflecting on the incident further, North Shore SAR Team Leader Mike Danks told Daily Hive he doesn’t want to necessarily single this person or incident out, but rather “we need to talk in general terms of lessons learned here, and the out-of bounds piece and avalanche stuff is critical.”

He confirmed the snowboarder in this case – who he described as “critically injured” when rescuers found him– had been riding alone, and had no avalanche safety equipment with him. adding the person was “very lucky to have been brought out alive.”

He also gave credit to the team of rescuers involved – in this case 28 members, plus bystanders who also assisted.

He reminded people who find themselves in trouble that 911 should always be the first call they make. “That is your very best way to get your message out.”