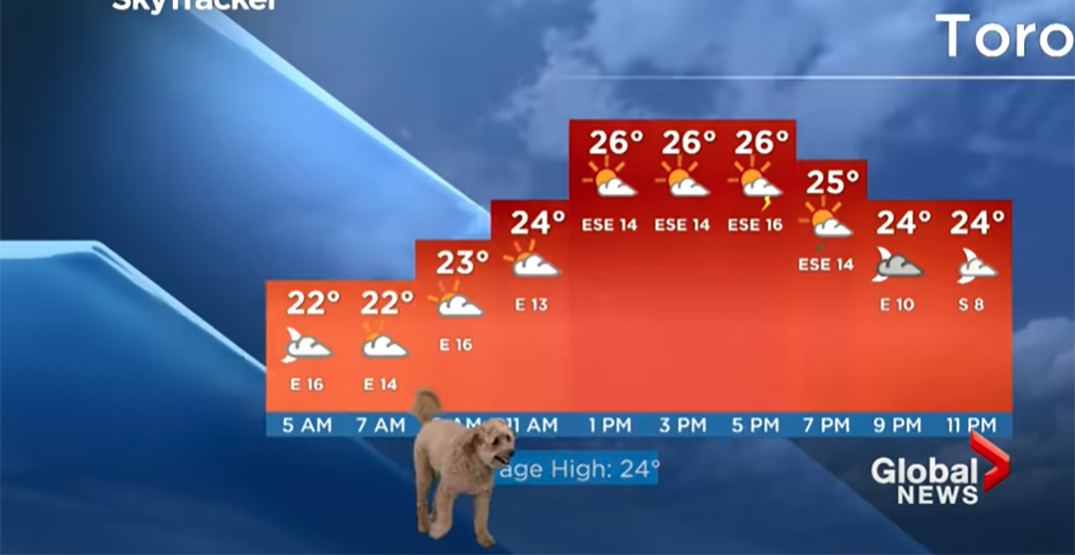 A Toronto meteorologist’s adorable dog won over viewer’s hearts when it crashed his weather forecast.

Global News’ chief meteorologist Anthony Farnell was talking about the weekend forecast during the Friday broadcast when his pup, Storm, walked across the bottom of the screen while looking at his owner and wagging his tail.

Storm began sniffing the ground and walking around the room — and right through Farnell’s forecast.

“Yes, Storm is in the building,” Farnell said. “Getting some treats, walking on thin air.”

Storm continued sniffing around while Farnell went through the weekend weather and the projected route of Hurricane Ida.

The news station shared the video on YouTube Monday, and commenters shared their love for Storm.

“TV news broadcasters everywhere should be required to have random dog cameos,” one person said.

“He shouldn’t have named him Storm, he kept saying his name,” another said.

Some onlookers thought Farnell may have been working from home, but Global News’ managing editor confirmed that Storm was right there with Farnell in studio.

.@AnthonyFarnell worked from home for months last year but this is back in our @globalnewsto studios and @StormWeatherDog is usually crashing his person’s workplace. Viewers move Storm, @AnthonyQuintano https://t.co/biYY501Uwj

Storm has actually popped up in Farnell’s forecasts many times before, and the pooch even has his own Twitter account.

I certainly do. Now you can’t unlearn it… https://t.co/etFuvnuVXr

Storm stirred up quite a bit of attention during the broadcast, so much that US news magazine show Inside Edition interviewed the dog and owner for a segment.

“Honoured that my dog Storm includes me in these international media interviews,” Farnell joked on Twitter.

Honored that my dog Storm includes me in these international media interviews. Thanks @InsideEdition https://t.co/SBvthEAj11