If re-elected into office, the Conservative Party has vowed to provide $700 million in funding for Surrey’s much-touted light rail transit (LRT) network.

The light rail project will cost a total of $2.1 billion, with the federal government committing one-third of the cost. The provincial government and TransLink are also expected to cover their own one-third share of the project, although TransLink’s funding is in question given that it was dependent on regional voters approving a 0.5 per cent sales tax to fund a $7.5 billion transportation infrastructure plan.

But Surrey Mayor Linda Hepner has indicated that the municipal government is pursuing a public-private partnership to fund and operate the project, in lieu of TransLink’s direct involvement given the organization’s current funding situation.

The announcement was made this morning at a press conference in Surrey by federal minister James Moore and former Surrey Mayor Dianne Watts, who is now running as a Conservative Party candidate in the riding of South Surrey.

Prime Minister Stephen Harper was scheduled to travel to B.C. on September 3 to announce his party’s funding commitment for the project. However, the developing political crisis over the photo of a drowned Syrian toddler, released on the same day of the scheduled announcement, took priority.

The proposed light rail network will be operationally separate from SkyTrain and run on street level, sharing space with vehicle traffic. Unlike SkyTrain, light rail trains would be manually driven.

However, during the press conference Moore also noted that the Conservative government’s promised funding is not dependent on using light rail technology. A business case for LRT over an extension of the existing SkyTrain system has not been made.

Today’s announcement comes after the federal Liberal Party’s $20 billion fund for public transportation initiatives across Canada, which includes the Surrey LRT project and the underground SkyTrain extension along Broadway.

Federal NDP leader Thomas Mulcair also made a similar substantial commitment of $1.3 billion in new annual federal transit funding over the next 20 years. 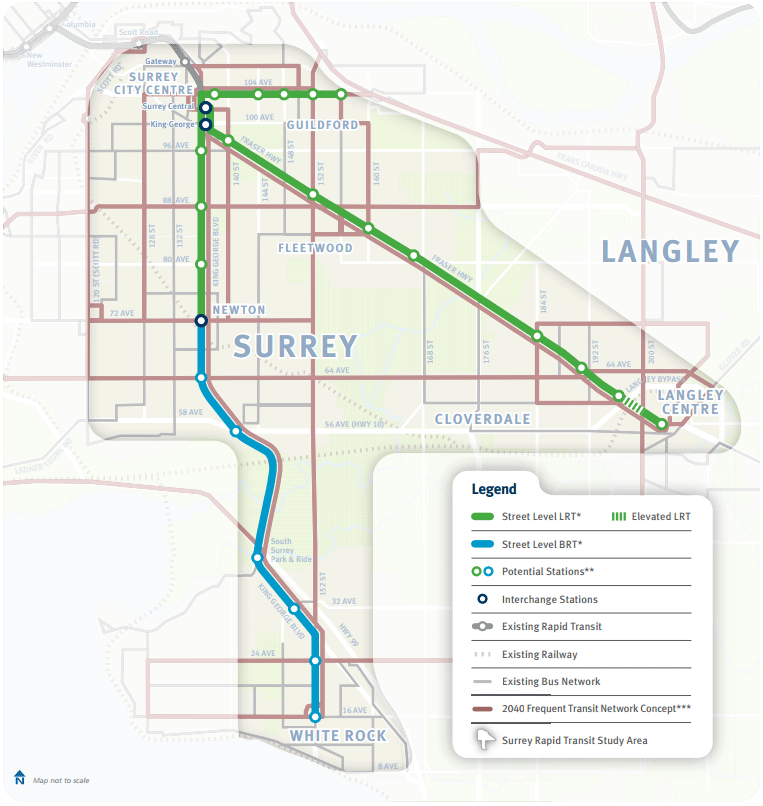