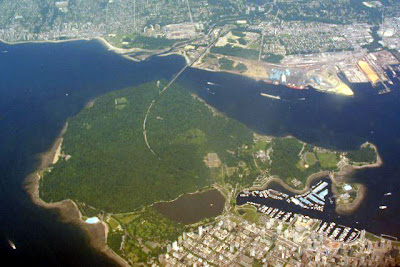 Update: Stockwell Day has just confirmed that Stanley Park will indeed remain Stanley Park! Thank god someone has sense.
Vancouver’s crown jewel, Stanley Park (one of the worlds 10 largest urban parks) may be renamed Xwayxway, if the First Nations get their request. Yes, you read that correctly, this isn’t a Canada Day joke or something. I’m not quite sure how I feel about this. On the one hand I get the argument as this is native land after all. On the other hand, it wasn’t necessarily a designated park at the time and why stop at renaming the park. Let’s rename Canada to Kanata.
Xwayxway Park, if Stanley Park would be renamed that is pronounced kwhykway and it was the name of a  permanent native village that existed at Lumberman’s Arch in Stanley Park.

Both politicians on the civic level and provincial seem to like the idea. Further, Tourism Vancouver members seem to like it as well. We’ll have to wait and see what the public perception is though. It is afterall a touchy subject.