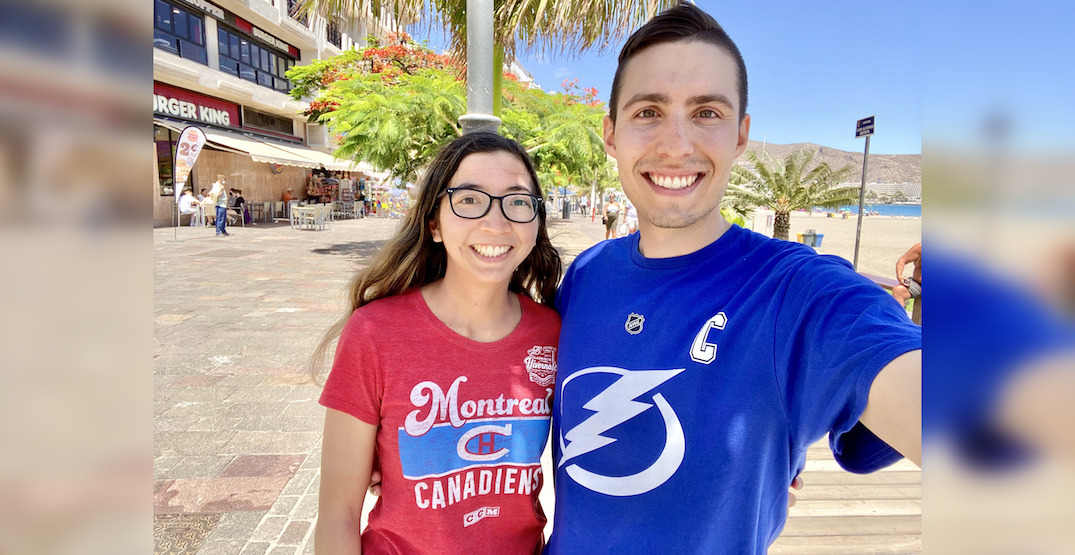 Montreal Canadiens fan Laura Wong and Tampa Bay Lightning fan Anthony Derrick have watched a lot of hockey together in the past six years since they first met each other while working together for the Vancouver Canucks.

But they never envisioned they’d see a Stanley Cup Final quite like this one.

Laura and Anthony have been going through what both describe as a “big test” for their relationship as their respective teams play each other in the NHL’s championship round.

With both their favourite teams typically playing in the Eastern Conference’s Atlantic Division, the chance of the Canadiens and Lightning meeting in the Stanley Cup Final most years is, well, impossible.

Mix in a temporary divisional realignment in response to a global pandemic along with a surprise playoff run from Laura’s Canadiens, and well, you’ve got yourself a once-in-a-lifetime experience neither her or Anthony will soon forget.

“We never thought it would be a problem cheering for these two teams,” Laura said.

Originally from BC, stationed in Amsterdam for their respective marketing careers, and currently on holiday in the Canary Islands, the schedule for the pair watching the playoffs has been many late nights and rough mornings as each of their teams progress.

A Twitter thread by Laura detailed the couples’ various travels throughout Sweden, Montreal, and back to Vancouver to go catch NHL games as the central themes of many of their trips.

As for what sparked their interest in non-Vancouver teams, both had soft spots that grew much larger as the realities of employment in the sports industry set in.

“We are born Canucks fans,” Anthony said. “But I think after working in the front office the magic kind of wore off a little bit, which sparks a new love for new teams.”

After we started dating, we learned that we both had "second" favourite teams besides the Canucks:

For Laura, the history and allure of the Montreal Canadiens drove her to become loyal to Les Habitants, with her admiration for goalie Carey Price helping as well.

For Anthony, Steven Stamkos was the driving force behind his Tampa Bay fandom, first watching him play at a Lightning-Canucks game in Vancouver.

“I brought a little sign on 8.5 x 11” paper, and I said Stamkos is my hero,” Anthony said. “I was probably a little too old to be that cute kid in the stands with his tiny sign, but he shot a puck at me and I thought that was really cool.”

In 2018, I bought Anthony front row tickets to see @TBLightning (and @realstamkos91) in Vancouver. pic.twitter.com/oUUWvfE2WB

Laura detailed how her Canadiens pulled through each playoff round despite being billed as underdogs against Toronto, Winnipeg, and most recently Vegas.

“Here they are,” Laura said.

Anthony said he’s usually had confidence in a strong Tampa Bay roster, but last week’s 1-0 Game 7 win over the New York Islanders to advance to the final was admittedly tough.

“It was pretty nerve racking for Game 7,” Anthony said. “Laura was sleeping, but I’d say that was probably the most anxious I’ve ever been for a game.”

As the Lightning and Canadiens tore through the NHL playoffs, the couple began to realize that their dream — or nightmare, depending on how you look at these things — Stanley Cup final was on the horizon.

For both Laura and Anthony, high-intensity sporting events are nothing new, particularly with the success of the the Lightning as the 2020 champions. There is something decidedly different about this year, though, Anthony said.

“When Tampa Bay won the Cup last year, sure Laura was very happy and supportive,” he said. “But it’s not the same as both of us being up at 1 am or 2 am to watch these games.”

And while overseas life seems to have been kind to the couple, they hope to one day move back to their home continent.

“Hockey is such an important part of our lives,” Laura said. “When we feel like we’re probably ready to settle down and perhaps raise a family in the future, we’d want our kids to be born and raised hockey fans. It’ll always be so much easier being back in North America.”

Monday night’s Game 1 went Anthony’s way, with the Lightning coming out on top by a 5-1 score in a game that ended around 4:30 local time.

“I think it was a good introduction to what the series will be like: very physical and very exciting,” Anthony said.

Laura thinks Montreal still has a chance to come back in the series, but needs to up their level of play against Tampa Bay.

“I was pretty happy with how [the Canadiens] were looking at least the first 10 minutes of the first period,” Laura said. “[After that], they were running around a lot and just not connecting well. They were frankly dominated by the skill of the Lightning.”

The pair is off work until July 15, with the latest possible date for the series coming on July 11. Whatever outcome happens on the ice, Anthony hinted on Twitter there might be a long-term contract extension coming off it regardless of the result.

“Loser has to propose,” he said.