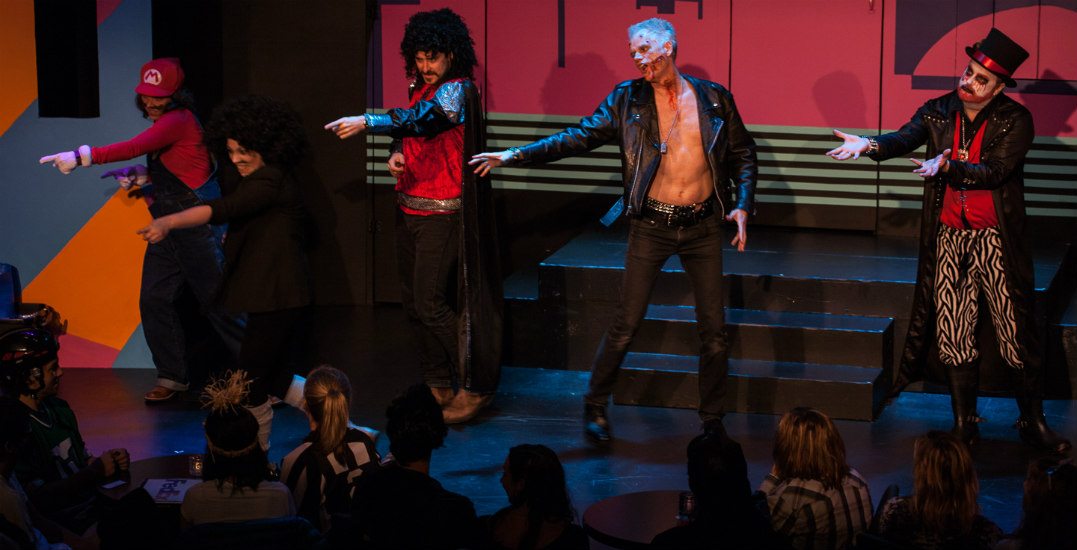 Instead of celebrating Halloween for one night only – these ingenious improvisers have decided to celebrate from October 9 to 31. (Halloween falls on a Wednesday after all, and no one wants to show up to work looking like an actual zombie.)

You can experience two of the shows for free by entering the contest below. But before you do, let’s take a look at the entertainingly eerie lineup.

This show pits teams of monsters against one another in a series of head-to-headless short-form scenarios to see who eeeks the most laughs. Will the werewolves defeat the witches, or zombies overcome the vampires? The winner is determined by audience judges. Monster Matches runs every Tuesday/Wednesday at 7:30 pm and Friday/Saturday at 9:30 pm.

Cult Fiction – Everyone Laugh Together

Framed as a documentary and hosted by an investigative journalist, this show sees the players utilize audience suggestions to spin a spellbinding tale behind the cult including the core cult belief and some of its unique traits. The more ridiculous the suggestions, the more inventive the action and louder the laughter. Cult Fiction runs every Thursday through Saturday at 7:30 pm.

This show sees a group of hikers trapped by a storm in a spooky forest. Inspired by audience suggestions, the hikers settle in for an evening of telling and acting out ghost stories. The improvisers turn these into hilarious comedic episodes. What could possibly go wrong? Scared Witless runs Wednesday/Thursday at 9:15 pm.

WTF – What the Fright

What the Fright takes its format from VTS’ regular late night show What the Fun! The show takes some of the more bizarre news headlines found in the media and social media and gives them a screamingly funny twist. What the Fright runs Fridays/Saturday at 11:15 pm.

Enter for your chance to win a pair of tickets to Cult Fiction – Everyone Laugh Together at 7:30 pm, followed by Scared Witless – Creepy Campfire Tales at 9:15 pm on October 11, courtesy of Vancouver TheatreSports.

To enter for your chance to win a pair of tickets to Cult Fiction – Everyone Laugh Together followed  by Scared Witless – Creepy Campfire Tales on October 11, do the following;

Contest entries will be accepted from the time and date of publishing until 11:59 pm on October 3, 2018. One winner will be chosen at random and contacted through the platform they used to enter.