Does speed really kill? A 15-minute YouTube video has debunked the “speed kills” propaganda that is perpetrated by our local and provincial governments, police forces and ICBC. The locally-made video by Six7Films and Sense BC was posted just three days ago and has since gained nearly 330,000 views and an 98 per cent (5,600 likes) “thumbs up” viewer approval rating at the time of this article’s publication.

If you are a Vancouver driver, odds are you regularly exceed the regular 50 km/h posted speed limit because it does not make sense to travel

at such slow speeds for certain roads under ideal conditions.

In essence, the viral video argues the following:

Does speed really kill? Sometimes, yes, but when the speed limits are set artificially low, and enforcement is targeted to those areas where the limit is far below traffic speed, then all the speed kills campaign does is keep drivers complacent about paying fines that don’t improve safety.

‘Speed Kills Your Pocketbook’ In Text

Government, the police and ICBC have all been framing the speed limit debate in the simplest terms: “speed kills” and “when you drive faster you are at more risk of getting into an accident.”

Backed by the B.C. Ministry of Transportation’s 2003 scientific report on posted speed limits and speed practices, the video (above) provides a reality check by taking a closer look at the actual facts and fallacies of driving speeds and whether speed kills.

So does speed kill? It can be dangerous but no, it does not.

Crashes and deaths are not caused by high speeds, however, it is an entirely different matter whenever a driver decides to drive at high speeds on roads with designs, environments and conditions that are not ideal for it.

Only foolish drivers would choose to drive “fast” during wet conditions or in peak hour traffic or at curves.

With all that said, the video argues speed limits here in British Columbia or even across Canada for that matter have been set far too low for the conditions where the majority of ticketing occurs.

For instance, a six-lane divided section of Marine Drive in Vancouver just west of Boundary Road has a posted speed limit of 50 km/h yet the same limit is also given for Commercial Drive. The Drive is of course urbanized, with intersections, pedestrians and walls of retail shops on either side of the street. It makes sense that the speed limit is 50 km/h on The Drive as that speed can only be achieved for a fraction of the time under ideal conditions.

There is no question that rules on the road are needed, but if we are to pay for these roads we have a right to demand that these roads make sense.

Red lights and slow zones around school and urban areas make sense. On the other hand, allowing politicians to set speed limits that do not reflect the road engineering and then getting the police to find and publicly complain about the speeders does not make any logical sense at all.

According to the video, Canada has some of the lowest highway speeds in the industrial world. And for the record, highways are considered as roads without pedestrians and intersections – roads like Lougheed “Highway” do not count.

Compared to Germany, where they have no speed limits on large portions of their highways, Canada’s vehicle fatality rate is over double per capita – almost double per hundred thousand vehicles and about 20 per cent higher per billion vehicles traveled.

It is not necessarily a matter of better driving or even better cars, but the German driving safety program targets all types of bad driving and the only mention about speed is buried.

The Solomon Curve’s concept is that if traffic is flowing at a certain speed, the farther from the average the vehicle is traveling the more dangerous the vehicle will be to itself and others.

When speed limits are too low, tension and rage builds up on the road. Take the use of the passing lane as an example: you have to pass on the left, but if the speed limit is too low you also have to obey the law which makes it impossible to pass.

So where do the current speed limits come from? The speed limits in North America were mostly set back in the day when cars had terrible handling and fuel mileage.

Even though modern cars are much safer, speed limits generally have not changed and many are now even lower. Governments and insurance companies make a lot of money from fines and have become accustomed to this stream of revenue over time.

Aside from the government’s role, the general public (specifically a very vocal minority), police and the media are also to blame.

If the police want people to slow down, they should park out in the open where they can be seen. The only problem with this tactic is when the police are visible, drivers will slow down and the government will not be able to make any money with fines. And when the media reports vehicle accidents, they set the impression by automatically blaming speed and getting facts wrong. 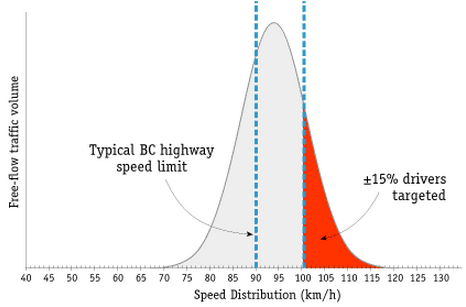 BC Speed Limits Target Safe Drivers: Under current BC speed limits, safe drivers are included within the red enforcement zone (the fastest 15% of vehicles). Speed enforcement should only target the top 2-5%. Enforcement tolerances set by police are often incorrect and result in even lower tolerances. Image: Sense BC

So how do you make roads safer?

The 85th Percentile Speed is a rule followed by most cities around the world… well, except for the City of Vancouver or those who manage the laws of the road in Victoria at the B.C. Ministry of Transportation. Where it is the standard elsewhere, it is not always followed around these parts.

The rule established the speed limit of the road by determining the speed of 85 per cent of the vehicles that drive through it under optimal weather and visibility conditions. The speed limit is therefore set by the speed of the drivers and assumes that the large majority of drivers are reasonable and prudent, do not want to crash, and desire to reach their destination in the shortest possible time within the restraints of the road’s design. 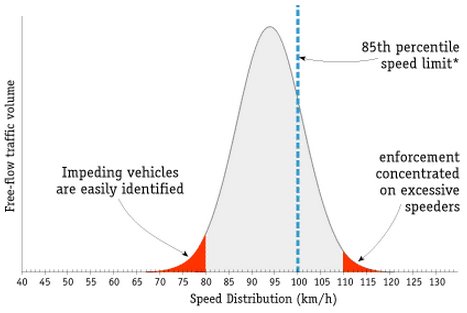 Going back to the section of Marine Drive explored earlier, nobody drives near the speed limit of 50 km/h. So why is the limit just 50 km/h as you enter the City of Vancouver?

You can argue that this might be a dangerous section of road and the city wants people to slow down. But if you look at ICBC’s crash statistics since 2008, this is one of the least dangerous places in Vancouver to drive.

Crashes have also been going down in both the Lower Mainland and all over B.C. during the last five years. Fatal crashes in the Lower Mainland are down by 50 per cent over a similar period of time. ICBC would argue that it is because of their road safety campaign, but the roads (and vehicles) have been getting consistently safer in the industrialized world over the last 100 years.

Since they started to keep track, vehicle fatalities in the United States per 100 million miles traveled decreased from 24 in 1921 to 5 in 1960 to just 1 today. In case you are trying to picture one hundred million miles, it is enough to drive forty kilometres to and from work everyday for the next 8,000 years. Even in Germany, the fatalities have dropped 70 per cent since the 1990s. 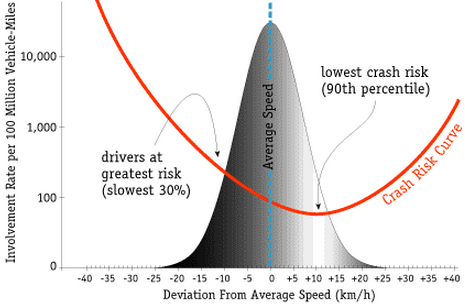 Speed Variance and Crash Risk. This graph shows that crash risk is minimized for those drivers travelling 10-15 km/h over the average speed. (Average speeds in BC are almost always over posted speeds.) Contrary to popular belief, there are more crashes at slower speeds than at faster speeds. Raw speed and crash risk are not directly related, however, there is a U-shaped relationship which shows few fast drivers involved in crashes, and many more slow drivers involved in crashes. Image: Sense BC

It gets worse when you compare this stretch of Marine Drive with a stretch of Lougheed Highway in Burnaby that is almost identical with similarly few accidents. But the limit here is a much more reasonable 70 km/h.

To quote Jeff Goldblum in Jurassic Park, the whole “speed skills” mantra is “one big pile of sh*t.”

Raising the speed limit is the safest thing to do.

So with all the evidence, what has the government done?

On the Sea-to-Sky Highway, they improved the road from a dangerous two-lane windy road to a four-lane median concrete highway but did not change the speed limit and even increased police enforcement.

Drivers should be able to go faster on the Sea-to-Sky Highway now that the highway design is safer – physics does not change. If you are traveling faster than the speed limit, you are not at more risk of getting into an accident.

The B.C. government’s 2003 report lists dozens and dozens of roads where the speed limits should have been raised during that year. It is not the drivers that are the problem, rather the government needs to start using proper engineering criteria:

Speed still kills your pocketbook because the government ignored the best scientific advice they were given after spending piles of your tax money to get it.

Do you agree with the video’s findings and arguments? Do you think speeds should be raised on roadways in Metro Vancouver and across British Columbia? Let us know by commenting below.