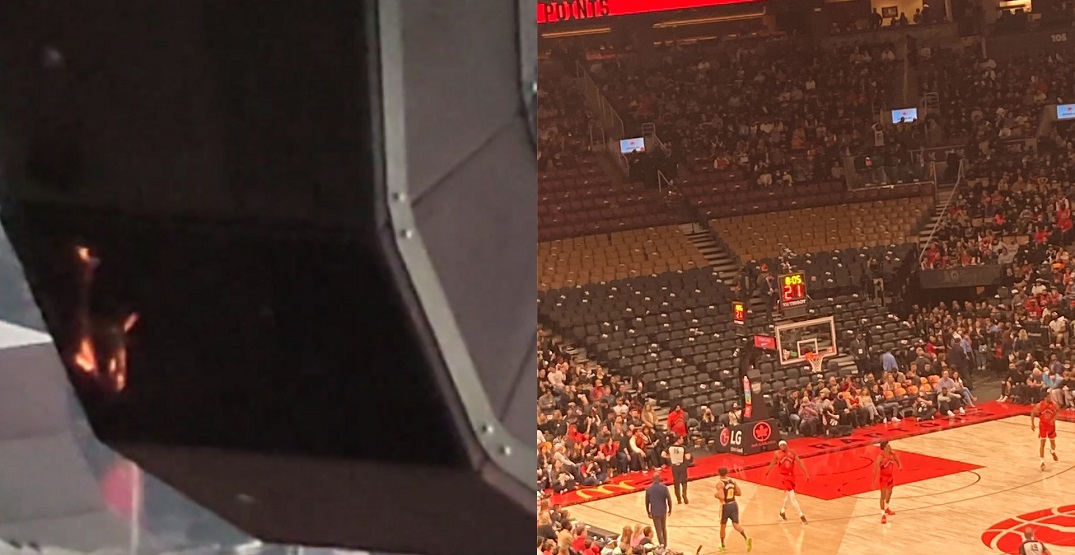 An electrical speaker fire has caused a suspension and evacuation at Saturday night’s Toronto Raptors game against the Indiana Pacers at Scotiabank Arena.

A speaker in the upper bowl of Scotiabank Arena began smoking during play, initially causing firefighters to evacuate two sections.

The teams initially played on for several minutes, before the game was eventually called to a halt with the Raptors leading 66-38 with 4:05 left in the second quarter.

After a delay of about an hour, the game is set to return to action with a shortened halftime, without fans in attendance.

Raptors fans were asked to evacuate the building after the fire was located, which lead to a chorus of boos. Raptors PR stated that refunds will be available for the game at point of purchase within 30 days.

The two teams shared quick hugs and handshakes before exiting the floor to their respective locker rooms.

Toronto Police and Fire services remained on scene, walking on the court and around the arena to deal with the issue.

I’m not a basketball expert but… are the speakers supposed to be on fire? #Raptors #NBA pic.twitter.com/JgIlY9Wc2N

The Raptors PA Announcer Herbie Kuhn stated there was no threat to public safety, but fans were asked to leave as a precaution. There were no reported injuries, per Toronto Police.

FIRE:
Scotiabank Arena
– reports of a speaker on fire at the @ScotiabankArena
– police o/s
– @Toronto_Fire o/s – advised 2 alarm-fire, TFS requesting the arena be evacuated as a precaution
– no reported injuries
– potential road closures in the area
– expect delays#GO565176
^al

Sportsnet’s Eric Smith shared a video of a Toronto firefighter dealing with the issue.

The Raptors were greeted by the few workers who were in attendance as they returned to the court.

Big cheer from the MLSE workers who stuck around as the Raptors take the court. pic.twitter.com/IWaGcI5tfc