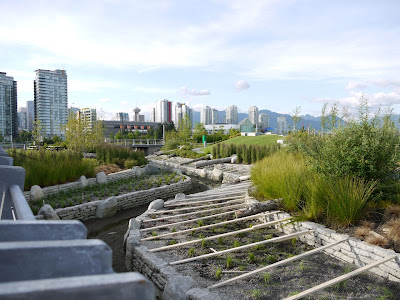 In recent months, there’s been a fair bit of hoopla surrounding the whole Olympic Village / South East False Creek housing issue. Activist groups have gone ape over the gradual reduction of social housing while sales of homes in the LEED Gold (for residential) and Platinum (for public buildings) certified development haven’t been breaking any records. But exclusive condos aren’t the topic of today’s little missive. Instead I’d like to draw your attention to what could quite possibly be the the most ecologically sustainable public space in North America; The South East False Creek Waterfront Park.
“It was our intent to bring people closer to the water” Says Derek Lee, Principal of PWL Partnership Landscape Architects, regarding the overall design of the public areas surrounding the development. “Part of that strategy is to reintroduce habitat within the urban context.” 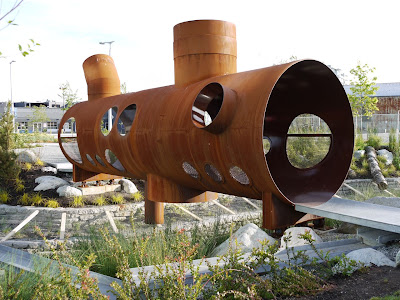 How does one reintroduce habitat to one of the most polluted bodies of water in the Lower Mainland? Well for starters, you consult with leading ecologists on how to best design systems that will attract life rather than repel it. Next, you incorporate an engineered wetland that supports indigenous plant species and offers birds and insects places to live and eat, while acting as a natural filter for hard surface runoff. Third, you construct an island that mimics different ecologies, softens the shoreline and provides limited access to prying human hands, eyes and feet.
Well that’s just dandy, a place where eagles perch, the mollusks can grow and otters and ducks play. Great. What about the real creature comforts? What about us humans? Bipeds get a pretty sweet deal too. By building a terraced shore, we can now go down to the water with our kayaks, and not have to deal with metal ramps and rickety piers. Also, just off the seawall, to the west of the development, there’s a fantastic park which lets you get right close to the wetland without actually disturbing it and still get a fantastic view of the opposite end of False Creek. Not only can we see nature in action, but PWL also turned the idea of destructive industrialization on it’s head, by making a plaything out of what would normally be used as a sewer drain. 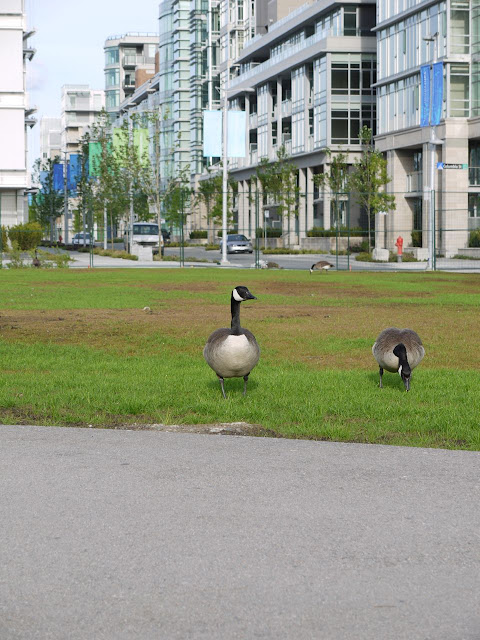 ” We wanted to bring back a feeling of spontaneity.” Says Lee, about the spinning captain’s chairs just next to the white steel canoe shaped foot bridge. “Also, it’s a place for people to relax” Referring to the sweet metal chaises overlooking the water.
So, let the poverty pimps complain about the lack of this and that. They have obviously overlooked the real jewel in the necklace that is False Creek. If they want to bitch, they can come find me in the South East False Creek Waterfront Park, chilling with the ducks.
VancityBuzz.com