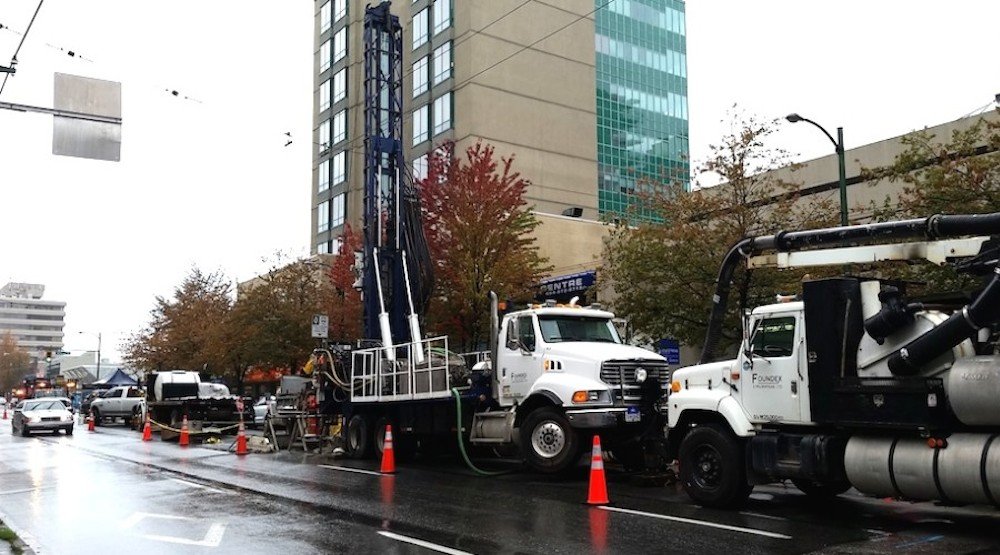 Geotechnical testing crews have returned to Broadway to conduct another series of soil sample tests examining the ground conditions for the tunnel construction of the SkyTrain extension along the corridor.

Drilling crews with Foundex, a local company that specializes in geotechnical drilling, were spotted on the street with a drilling rig extracting core samples of the soil.

In an email to Daily Hive, the City of Vancouver confirmed that the drilling is “part of ongoing geotechnical work as part of the pre-construction and consultation” for the underground SkyTrain extension of the Millennium Line under Broadway from VCC-Clark Station to Arbutus Street.

Tests began last week and will continue daily through April 15. The City says traffic at both sides of Broadway between Main Street and Manitoba Street will be reduced to two lanes in each direction to allow for soil drilling to be conducted. Some traffic disruptions can be expected.

Soil sampling tests have been conducted intermittently along the proposed route of the subway since summer 2015 when crews were first spotted performing drilling. Similar tests were also made in advance of the tunnel construction for the Canada Line and Evergreen extension.

Learning from the Canada Line’s construction process along Cambie Street, the municipal government previously stated that it prefers the less-disruptive tunnel boring method for the construction of the extension under the Broadway Corridor. However, stations will likely need to be excavated using the cut-and-cover method.

Previous planning documents from the early-2000s indicated a tunnel under 10th Avenue as an alternative option, with station entrances located one block north on Broadway.

If all funding is secured, construction could begin sometime in 2018. Both the provincial and federal governments recently committed $2.2 billion each towards the combined costs of the Broadway extension and the new Surrey light rail transit network. This leaves TransLink and local municipalities with finding the revenue needed to fund 20% of the construction costs.