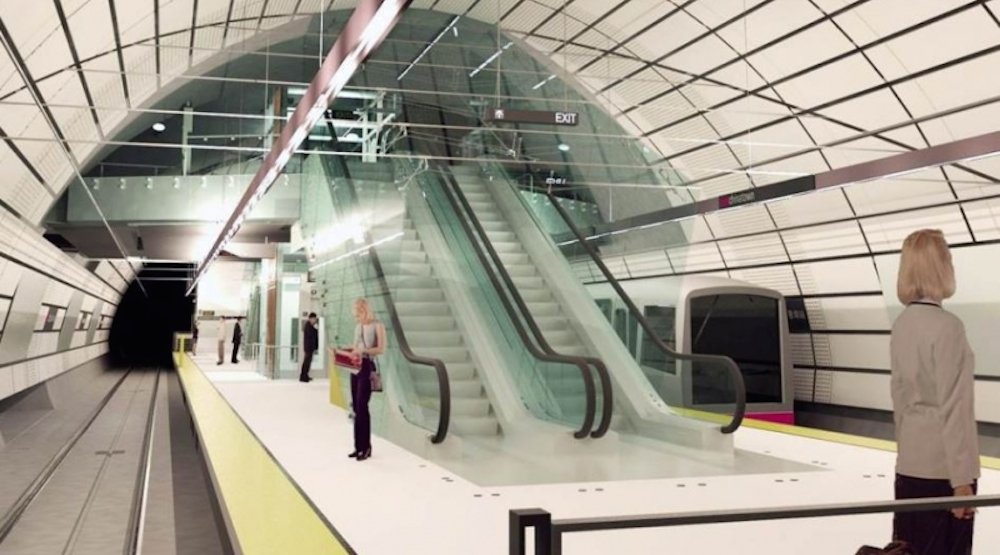 Artistic rendering of a station for the San Francisco Central Subway. (SFMTA)

After much speculation and uncertainty, and with a provincial election just weeks away, the BC Liberals announced this morning at a press conference that they will be providing $2.2 billion for the underground SkyTrain extension of the Millennium Line under Broadway in Vancouver and the new light rail transit system in Surrey.

This matches the federal government’s commitment of $2.2 billion, made public in the federal budget last week, accounting for 40% of the total construction costs of the projects.

The provincial government previously stated it was only willing to cover 33% of the cost, but today’s commitment pushes its share up to 40%.

Earlier this year, the BC NDP also stated they would provide a 40% share of funding to cover the projects if elected in the May election.

“We have never been closer than we are today to putting shovels in the ground for Phase Two of the Vision,” said New Westminster Mayor Jonathan Cote, Chair of the Mayors’ Council Funding Strategy Committee.

“As we head into a provincial election campaign, it’s reassuring to see all of the political parties talking about transportation in Metro Vancouver. This is recognition of just how important it is that our governments work together to reduce traffic congestion on our roads and overcrowding on our transit system.

With 80% of the ‘Phase 2’ costs covered by the senior governments, this leaves TransLink and local municipal governments with the task of finding funding to fill the remaining 20%. This also pegs the combined cost of the projects at $5.5 billion, up from the previous estimated figure of $4.6 billion.

“With $4.4 billion in senior government funding now committed, the region is poised to make real progress in achieving the transit priorities for the Lower Mainland,” said Peter Fassbender, the Minister Responsible for TransLink. “British Columbia looks forward to continuing to work with our federal and regional partners on delivering the next phase of these projects.”

If all funding needs are met, specifically TransLink’s portion, pre-construction work on both projects could begin sometime next year. The Mayor’s Council governing TransLink previously suggested raising its share of funding by road tolls, property tax increases, and a vehicle levy.

“Next week, the Mayors’ Council intends to lay out a path for the next government to work with us on a full funding strategy and legislative changes needed to complete the 10-Year Vision,” continued Cote.” We look forward to continuing this important conversation in the lead up to the election.”

A plebiscite mandated by the BC Liberals over implementing a 0.5% regional sales tax to support transit improvements was rejected by voters in Metro Vancouver in 2015.

Close to $80 million from Phase 1 transit funding is being dedicated towards the pre-construction design work of both projects.

Broadway Extension of the Millennium Line

The so-called “Broadway Subway” will be a six-km-long extension of the existing SkyTrain Millennium Line, with new tracks built from VCC-Clark Station. There will be a station at the False Creek Flats next to the new Emily Carr University of Art + Design campus before the track dives into a tunnel towards Broadway.

Under Broadway, there will be subway stations at Main Street/Kingsway, Cambie Street (transfer connection to the Canada Line), Oak Street, Granville Street, and Arbutus Street.

A future phase will extend the line beyond Arbutus to UBC. 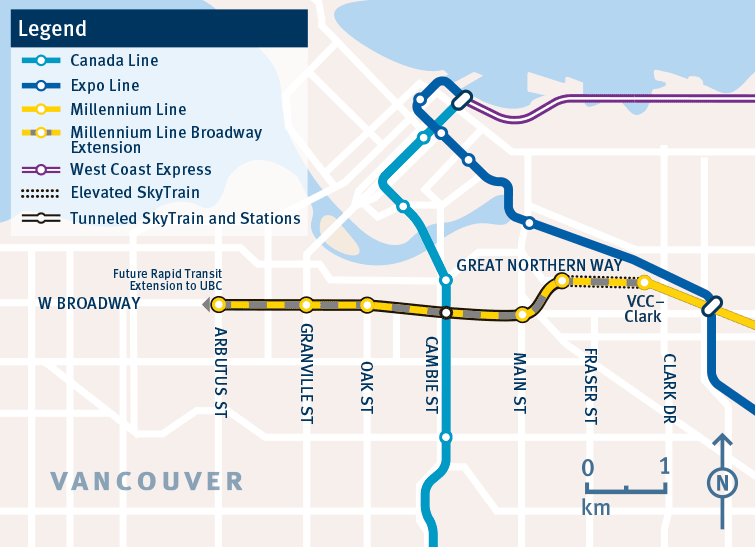 Proposed route for the underground extension of the Millennium Line under Broadway. (TransLink)

Route of the future extension beyond Arbutus Street to UBC. (TransLink)

A 26-km-long light rail project running at street-level in Surrey is also planned. The transit network will have two lines built over two phases: The first ‘L’ line will run from 104 Avenue to King George Boulevard, connecting Guildford with the City Centre, while the second line will run along Fraser Highway from City Centre to Langley.

However, TransLink is studying options for the second line running along the Fraser Highway – whether it should be an extension of the SkyTrain Expo Line instead of light rail. 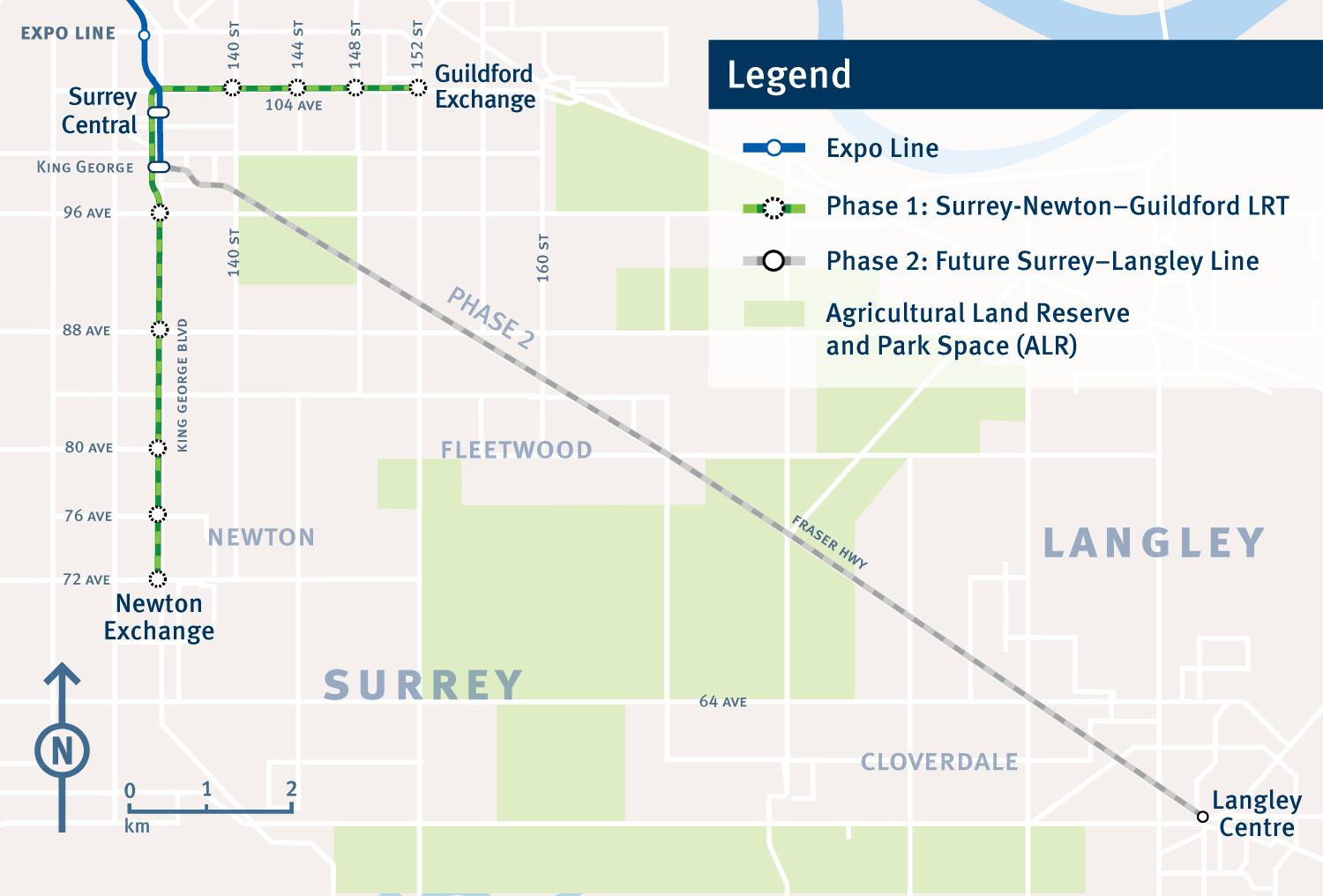 Map of the proposed lines and routes for Surrey light rail transit. (TransLink)