With so many people in Vancouver, B.C., and nationwide becoming increasingly more conscious of where their food comes from, the need for an innovative and convenient way to track down locally-grown produce is paramount.

Connecting local people directly with their local farmers, Kelowna start-up Soil Mate, which launched back in May 2014, operates a farm-to-table networking site that matches consumers with their local food and drink growers, raisers, producers and supporters.

The site also allows consumers to pinpoint specific growers and products, as well as stores and restaurants that support those local growers and carry/use their produce.

What inspired you to create Soil Mate?

Matt Gomez: The biggest motivation for starting Soil Mate was having kids. I grew up in the UK, with zero connection to the food I ate and the values of those [who] produced it. But in recent years I have become more aware and educated around a variety of issues with our food system, from issues with the food itself to how and by whom its produced. For example the average age of a farmer in Canada is in their late 50s. It’s the same in the U.S., where for every farmer under 35 there are seven over 65. Legitimately, in the very short future who will be growing our food? Well unless you want to eat from an industrialized system…but we have seen the dangers of that with the issues in California.

I had opened a Pandora’s Box of really scary issues around our food systems, and once you have opened it, you can’t close it. Wanting to help create stronger local food systems so that my kids will have that as an option in the future is now my mission. 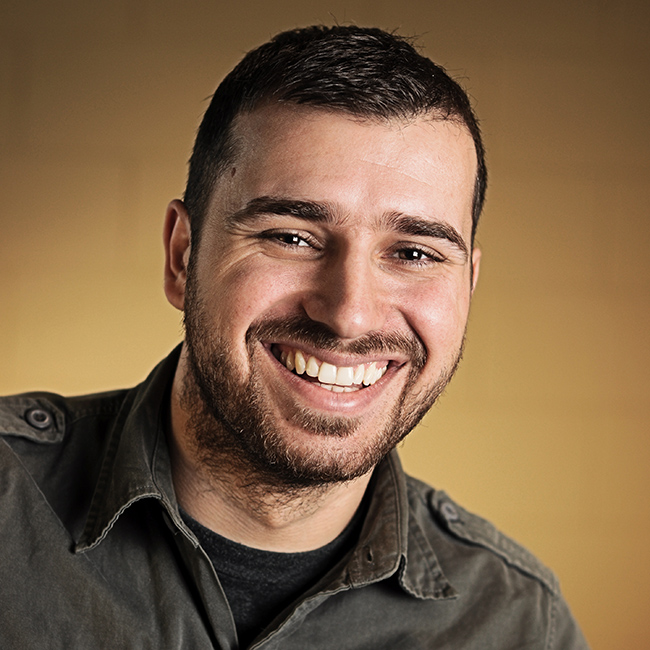 How did your background in web design and marketing aid with the development of Soil Mate?

It was key. Soil Mate works in every U.S. state and Canadian province. It’s a single site, a single brand that allows you to find local specific information anywhere. Building Soil Mate we started from scratch. We worked with groups of consumers to determine what info they would need to conveniently make a local choice over a generic product. That info was very simple, at any given moment being able to know what’s available, when and where can I buy it. We then worked with farmers to build a system they could provide that info easily on. My background aided me in that I was able to pick and choose the best bits of many different systems, serving many different industries and build it into a system serving agriculture and local food.

How has Canada, and more specifically Vancouver, taken to Soil Mate?

It’s been mixed thus far. We have had great reach and have listings in every corner of the U.S. and Canada. Some areas have taken the site on board quicker than others. The interior of B.C. have been using the system extensively. We are based in Kelowna, so that’s our back yard, but we have also had significant traction in California, Texas and New York amongst others areas. Vancouver has been pretty slow to come on board, but I think that is in part because they already have a few decent local directories in play. We also do not market heavily presently. Our growth has mostly been ‘organic’ and through referral so we haven’t pushed too hard here…yet. 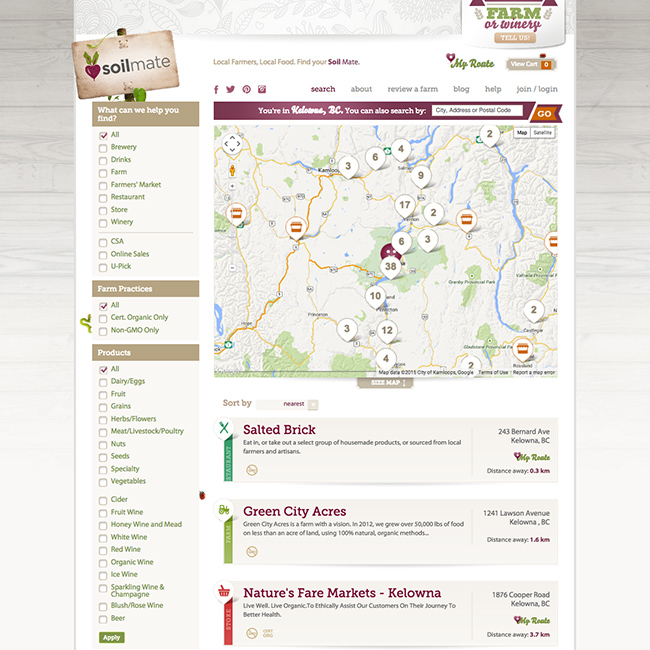 Are there certain requirements a farmer has to fulfill before signing up to Soil Mate?

There are but they are pretty minimal. We worked really hard with farmers when developing the system to make sure it would work for them from an ease and time point of view. To set up a profile they just go to Soil Mate and provide a brief description of their farm and values, and where and how their products can be purchased. We do this in a pretty nice way in that their distribution points (markets, stores, restaurants) can have Soil Mate profiles, too, and all be interlinked so you can instantly find the most convenient way to buy for you. They also add in the products they grow, raise or produce, along with the dates they are in season, which powers the Soil Mate search and gives consumers fully up to date information. That’s the minimum they need to supply–beyond that they can sell products online, feed in their blogs and social media, list events, even have galleries and additional information. 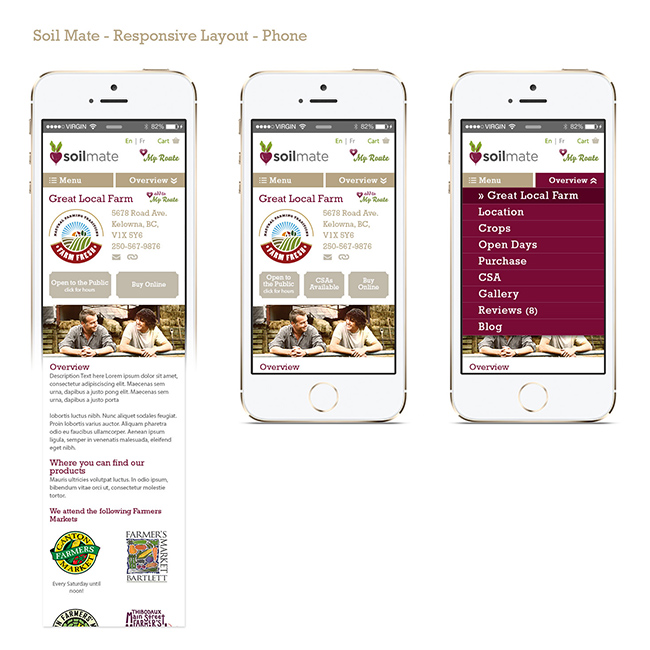 Could you explain the ‘My Route’ function on the site?

Aside from farms, we also allow markets, stores, and restaurants (that source locally) along with wineries, breweries, distilleries and other local drink producers to list on the site. With My Route you can build trips to all these places. You can enter your shopping list, the site will then show you all the local suppliers and let you build an itinerary with directions and timings to buy all those products. If you want to visit a few farms, a few wineries and then eat at the restaurant supplied by them all, you can do that through Soil Mate. If you want a downtown brewery tour, you can build that. We allow routes to be created that you can share and it even lets you select whether you want driving, cycling or walking, and puts you on roads, bicycle lanes or sidewalks. We’ve even seen people plan cycling vacations through the site.

I read that Soil Mate donates 50% of its gross revenue from its listings to local food charities. Is this correct?

Yup. It’s a whopping figure, but Soil Mate isn’t just a tool for finding local food and drink. We want to change the way people find, value, and buy local food, and we cannot do that alone. There are so many amazing people working in their local communities doing great work, programming and providing resources to facilitate change. So aside from supporting them from a promotion point through our networks (social media and our blog) we can also support them with funds. Soil Mate is free for farms and markets, but stores, restaurants and the drink producers pay (a very small monthly fee) to be on the site, and we donate 50% of that. So we give significantly more than we make. But for us it’s vital that we support the food security community, because if we don’t, we as eaters could be in very big trouble very soon.