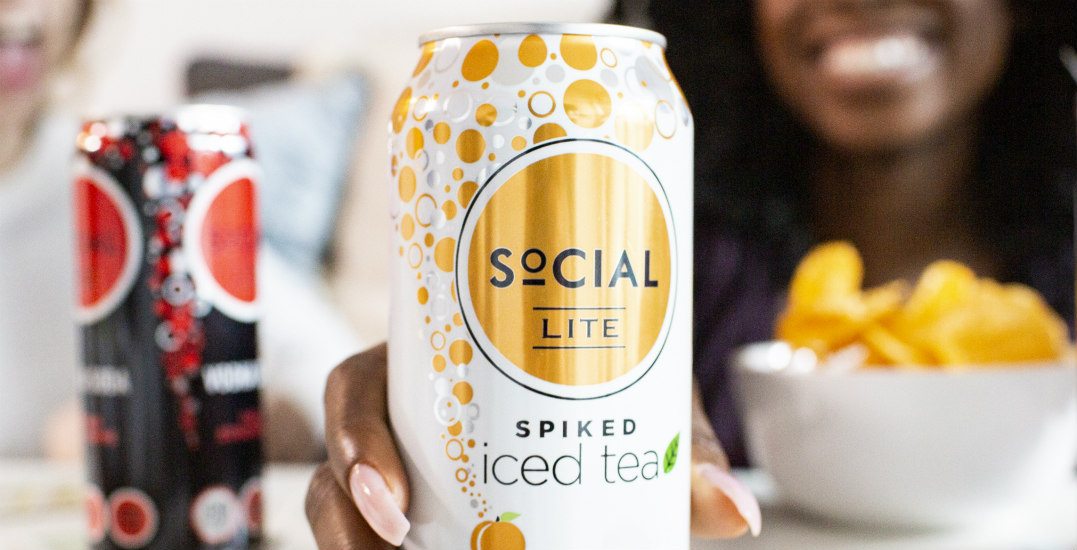 There’s a new hard iced tea that you need to add to your summer 2019 to-do list.

Canadian company SoCIAL LITE Vodka has been stocking their refreshing vodka sodas on B.C.’s shelves for the last four years. You might have seen the signature sleek black cans boasting fruit-first flavours like Grapefruit Pomelo and Pineapple Mango.

But did you know that they also make insanely delicious hard iced teas? And here’s the kicker: they’re the only spiked iced tea you can buy with NO sugar added. They’re made with real black tea and 100% natural flavour, striking a balance between tasting great without being overly sweet.

SoCIAL LITE has two spiked iced tea flavours, Lemon and Peach. Lemon adds a citrusy kick to an already refreshing bevvy, and Peach is the perfect choice for those hot summer days when you’re craving a sweet drink that won’t weigh you down. Both flavours are made with premium Canadian vodka, real brewed black tea and have zero sugar and zero sweetener, whereas other hard iced teas can have 4 to 8 teaspoons of sugar in each can.

As Neetu Godara, co-founder of SoCIAL LITE Vodka, puts it: “If I were to offer you an iced tea and tell you I was going to put six sugar cubes in it, would you want it?” That’s a resounding “no thanks” from us.

These show-stopping spiked iced teas are making their way to private liquor stores now, just in time to help you soak up the sun. They’ll be available in single tall boy cans to start with and will be launching in six packs in June.

For all you vodka soda lovers out there, keep an eye out for the company’s two new, deliciously summery flavours, Field Strawberry and Blood Orange (available in exclusively in their 12-can mix pack). Fans online, especially those on Instagram, have been calling the strawberry the best vodka soda on the market. You can’t go wrong with a drink that literally smells like a strawberry patch when you crack open the can.

SoCIAL LITE Vodka was dreamed up by three friends (Godara, Dan Beach and Kevin Folk) in their kitchens. They started making cocktails for friends and family that matched their active lifestyles, then began selling those vodka soda creations to the public in 2014.

Today, the company is excited to see how rapidly unsweetened drinks have grown across the country. Godara shared: “We’re proud to have been the first vodka soda brand in Canada. We were the original vodka soda and now we are the first to bring spiked iced tea fans an unsweetened option.”

SoCIAL LITE is also currently one of the few ready-to-drink brands in Canada that lists their nutritional facts right on the can. Who knew transparency could be so sweet?

This summer is an exciting one for the brand for another reason. Godara spilled that SoCIAL LITE is going to be the official drink of Vancouver Pride 2019. Who doesn’t love a brand that loves love?

If you’re not already on the hard iced tea train, consider the advantages of a tasty gluten- and sugar-free beverage. While your friends are crushing brewskies that make them feel sluggish and full, you can sip on something that lifts you up instead of bringing you down. Plus, the single cans pack perfectly into a cooler, backpack, or beach bag, making for the perfect on-the-go drink of summer.

And did we mention that each spiked tea is only 100 calories, and the vodka sodas clock in at just 80? That means you can — responsibly — knock them back guilt-free this summer without worrying about the nasty aftereffects that accompany drinking sugar-laden bevvies.

We know why we love this spiked tea, and Godara confirmed that other Canadians feel the same: “It has no sugar and it’s 100 calories, but at the end of the day, the most common feedback you get is that people love that it tastes great.”