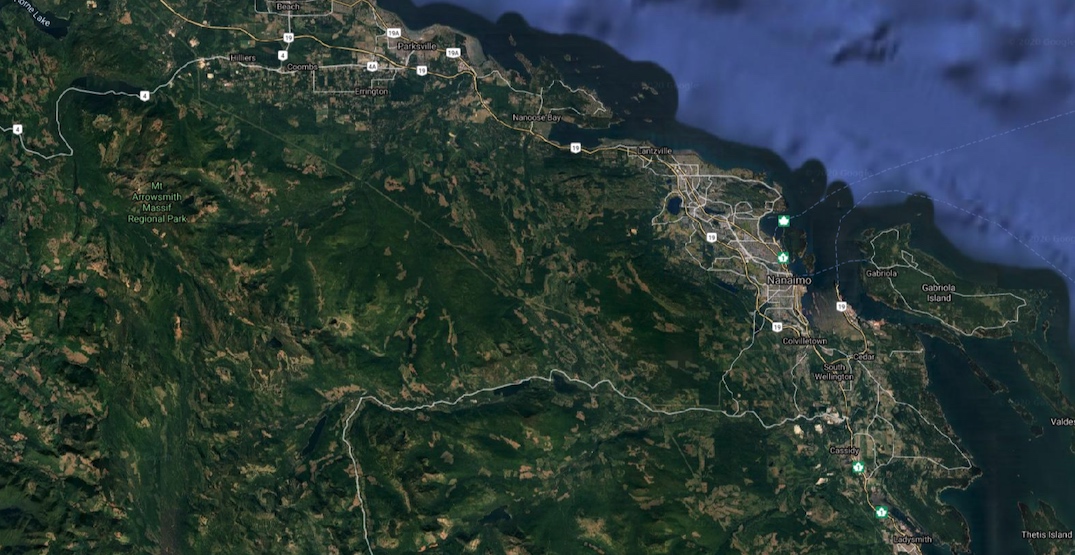 Aerial of the area around Nanaimo on Vancouver Island. (Google Maps)

Over 7,400 acres (3,000 hectares) of Crown land near Nanaimo will be transferred to the Snuneymuxw First Nation.

Under the banner of reconciliation, the provincial government announced earlier this week it signed two agreements that will effectively provide the First Nation and its members with new economic development opportunities.

The allocated Crown land for transfer to the First Nation is equivalent to over seven times the size of Vancouver’s Stanley Park.

The new agreement includes lands at Mount Benson and Mount McKay, and will result in up to 160 new jobs through forestry partnerships.

Public consultation will be held on Snuneymuxw’s future planning for the lands before the eventual transfer, with this work informing future land use after the parcels are transferred.

Public access to The Great Trail of Canada will remain, and 741 acres (300 hectares) on Mount McKay will be protected to provide habitat for elk and deer populations.

In exchange, Snuneymuxw will discontinue its litigation launched against the provincial government in 2001 over concerns that log booming in the Nanaimo River estuary impacts its Douglas Treaty rights to fish.

“Our shared commitment to stewardship and protection of the lands and waters of British Columbia and protection of endangered species and habitat is an essential element of our values to protect our lands and resources for this and future generations,” said Snuneymuxw First Nation Chief Mike Wyse in a statement.

“Like we have always done, Snuneymuxw people welcome new relationships, support prosperity and business development in the mid-Island area, and will work with all of our partners to bring new opportunities.”

This land transfer deal acknowledges the relationship that was made based on the 1854 treaty agreement with the Crown under the colonial government of Sir James Douglas, the governor of Vancouver Island.