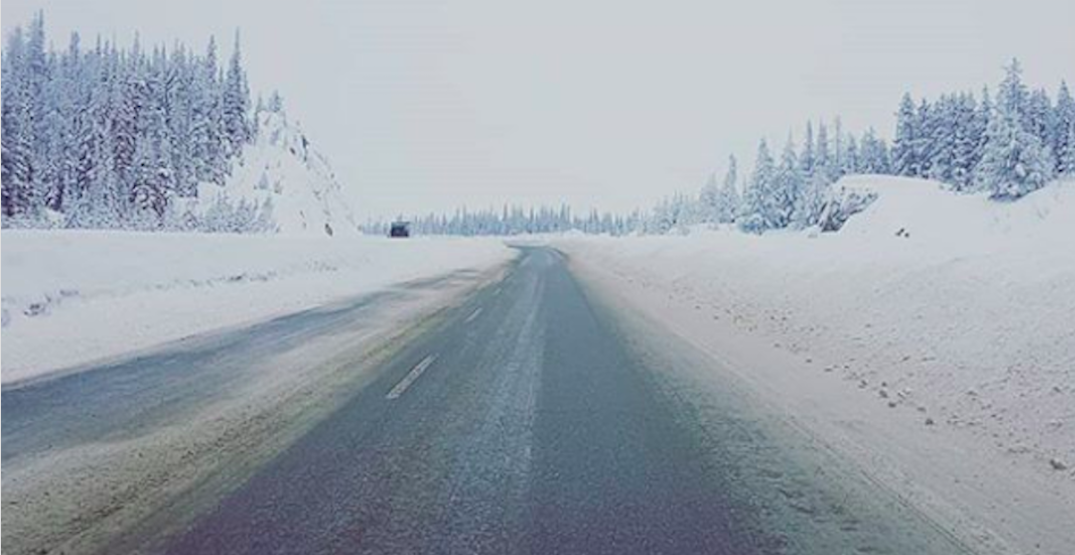 Snow on the Okanagan Connector, between Merritt and Kelowna, earlier this year. (Instagram @essentiallyokmom)

Oh sure, the calendar might tell us we are just a week or so away from the first official day of summer, but dates on paper apparently don’t mean anything to Mother Nature – at least according to the latest weather warning for the BC Interior from Environment Canada.

The snowfall warning was issued for people travelling the Okanagan Connector – between Merritt and Kelowna – as well as nearby areas this weekend.

“A strong southerly flow aloft will set up late on Friday and bring rain starting in earnest Friday night and continue through Saturday,” the agency said in a statement. “Isolated thunderstorms giving gusty winds and increased rainfall rates are possible.”

Okay, that doesn’t sound too bad.

“Over the latter half of the weekend, the strong southerly flow will shift eastwards into Alberta and be replaced with a cool and unsettled airmass,” the statement continued.

And here’s where it gets interesting.

“After a warm and largely dry month of May, a wet and cool weekend is in-store for much of the southern BC Interior,” the agency said. “High elevation travellers routes may see some snow on Sunday.”

For those travelling this weekend, the advisory applies to:

All-in-all keeping the snow tires on or carrying chains in your vehicle might not be a bad idea.

It seems “Juneuary” is truly upon us.