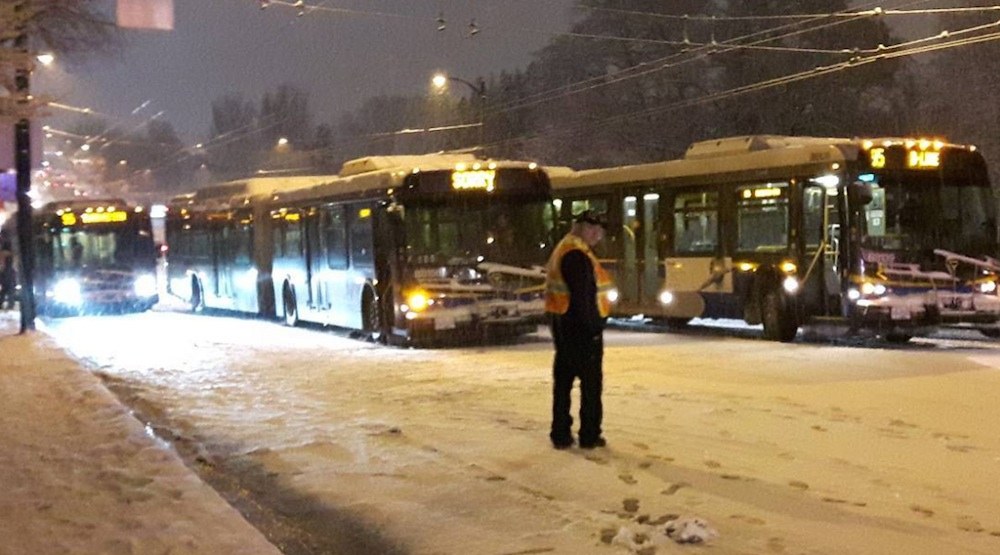 Residents across Metro Vancouver who live near busy arterial streets woke up to a deafening silence. Poor road conditions across the region are forcing many to stay at home for the second day in a row as snow continues to fall in Metro Vancouver.

Up to 14 cm had already fallen at the University of British Columbia campus by midnight, not including the ample volumes of snow that fell during the morning hours of Saturday. Over at Vancouver International Airport, approximately 12 cm was recorded by that time as well, and it goes without saying higher elevations and areas further east saw even more snow.

Another two to four cms is expected to fall throughout Saturday morning and evening, prompting Environment Canada to issue an extended snowfall warning for the region.

And with such conditions, it’s not just cars that are having a tough time getting around: Some public transit services, mainly buses at this time, are significantly affected with delays or reroutings.

At the time of writing, there are no major SkyTrain delays, although there were disruptions on the Expo Line for approximately an hour earlier this morning after a tree fell onto the tracks near Joyce-Collingwood Station.

There were two major, separate snow and ice-related service disruptions on the Canada Line during the morning rush hour and again in the evening beginning at 6:30 pm until just after 9 pm. But operators say they will be running more trains today to avoid snow and ice build-up on the North Arm Bridge over the Fraser River between Marine Drive Station and Bridgeport Station.

According to TransLink, here are the service disruptions as of 9 am Saturday:

HandyDART is currently operating essential services only for renal and cancer patients in the following locations:

Canada Line is running additional service after 9 am and crews are working to maintain lines and guideways from falling snow.

Next stop #Toronto. #winterwonderland. Over 10 #buses #translink stuck on #Lonsdale Avenue close to #seabus. No 229 or 230 and few 239 buses coming in to #Lonsdalequay. Had to hike up the hill to get to work. #cardio #yvr #naturesstairmaster #workout #northvancouver