Snow in March? In Vancouver? It could happen. Weather forecasters are already predicting more snowfall here this week – and beyond.

According to the Weather Network, the snow will start on Wednesday, March 1 and continue through Monday, March 6. 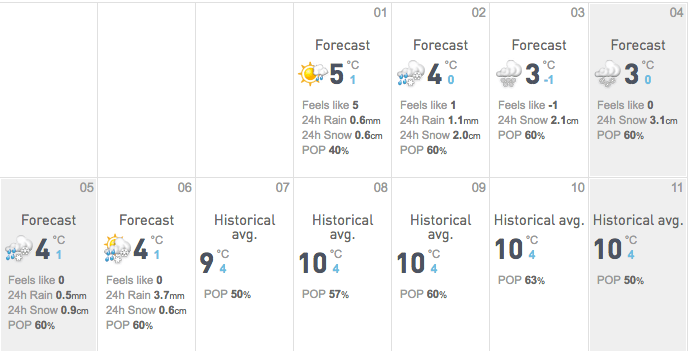 Vancouver weather forecast for snow in March (The Weather Network)

Accuweather picks up from there, forecasting snow all the way from Monday, March 6 through Friday, March 10.

The snow may also make a one-day return on Tuesday, March 14, according to Accuweather’s forecast.

On average, Charbonneau said, Vancouver gets 2.3 cm of snow in March, over a period of about one day.

“To get significant snowfall, multiple days of snow, where we’ve been snowed in, that would be unusual,” said Charbonneau.

“But given that we have had snowfall in March before, it’s not out of the realms of possibility that we would see trace amounts of snow.”

Well, if it does happen, it’ll certainly help that pre-spring skiing!