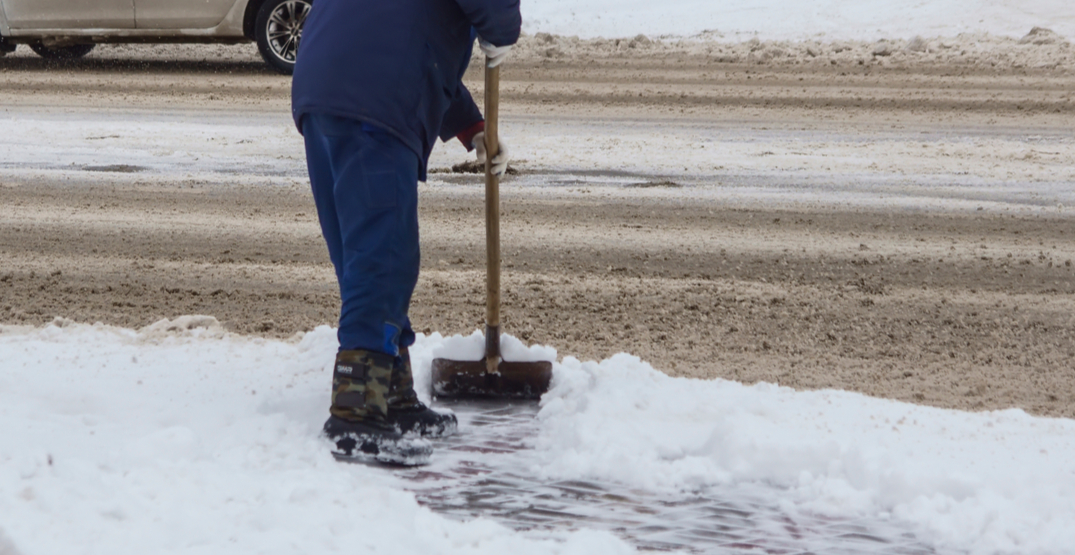 With the snow that has recently fallen in Vancouver, it’s fair to say that residents have their work cut out for them when it comes to shovelling their driveways, walkways, and other areas of their properties.

Now, the city is reminding residents whose property extends onto a public sidewalk that there are certain time limits and rules regarding clearing a path for themselves and for public users.

According the snow and ice removal section of the city’s Street and Traffic Bylaw, “the owner or occupier of any property must clear their sidewalks of snow and ice no later than 10 am every day.” Failure to do so may result in fines.

In an email to Daily Hive, the city said it will “go ahead and charge without a warning when circumstances warrant” (e.g., late in the season, heavy snowfall, early-season educational campaign completed).” These tickets are $250.

There is no specific “policy to provide warning notices before enforcing snow removal infractions,” the city noted. Rather, “inspections are based on complaints and while staff are out on their normal route checks.”

That being said, the city “does, in practice, tend to educate the home occupants and owners about their snow-removal obligations early every winter season.” This “may include delivering informational notices to homeowners and occupants (aka “warnings”) if it appears that their sidewalks have not been cleared in compliance with the bylaw.”

Enforcement is also “more likely to occur later in the season after warnings have been provided and awareness is expected to be greater.”

If and when the city decides to enforce the bylaw through the imposition of fines, “engineering inspectors will attend to properties throughout the city to document non-compliance (i.e., collecting evidence of the offence) and send a bylaw infraction ticket to the homeowner.”

Tickets that are unpaid will be forwarded to the City Prosecutor, “who decides whether or not to lay the charge against the homeowner under s.76 of the Street and Traffic Bylaw.”