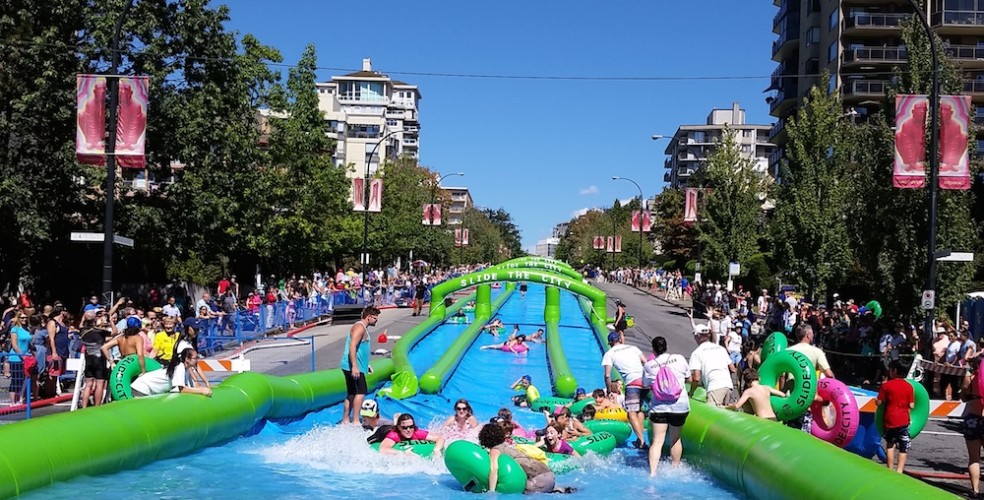 UPDATE: North Vancouver City Council has unanimously approved to make this year’s Slide The City event on Lonsdale into a two day event.

North Vancouver’s Slide The City event could become a massive two-day event if it receives the necessary approvals from City Council tonight.

On August 22 last summer, over 6,000 people slid down a 1,000-foot-long water slip-and-slide down Lonsdale Avenue from Victoria Park to the intersection with 4th Street. From the sidelines, another estimated 15,000 people watched the spectacle, which was part of the municipality’s Car Free Day festival at Lower Lonsdale.

It was the largest single-day Slide The City event ever. The Utah-based organization that operates and organizes the touring event sold out of tickets for the North Vancouver event in just two weeks in early summer. Normally, the general public is able to purchase tickets on-site; organizers rarely sell out before the day of the event.

A report by City staff describes the event as a “huge success”, with the only major issue dealing with the long lines experienced by sliders at certain periods of the 11-hour event. However, a two-day event this year will allow more tickets to be sold to meet the high demand and enable for two shorter operational days.

“Due to an extremely high demand for tickets, the difficulties of setting up and taking down the slide in one day, and an overwhelmingly positive response from the community, staff support the expansion of Car Free and Slide the City to two days,” reads the report.

There were no reports of injuries, but staff are recommending organizers to reconsider the slide location – possibly move the slide higher up Lonsdale to reduce the speed at the splash pool end of the slide.

Additionally, more ticket sales will in turn mean more money donated to charity. Throughout the inaugural event, a total of $5,488 was raised for the Canadian Cancer Society.

If approved, Slide The City North Vancouver 2016 will be held on Saturday, August 13 and Sunday, August 14.

Slide The City organizers are also planning to bring their event to a number of other Canadian cities this summer, including Calgary, Edmonton, Toronto, Montreal, Quebec City, Saskatoon, and St. John’s, Newfoundland. More cities could be announced in the coming months.