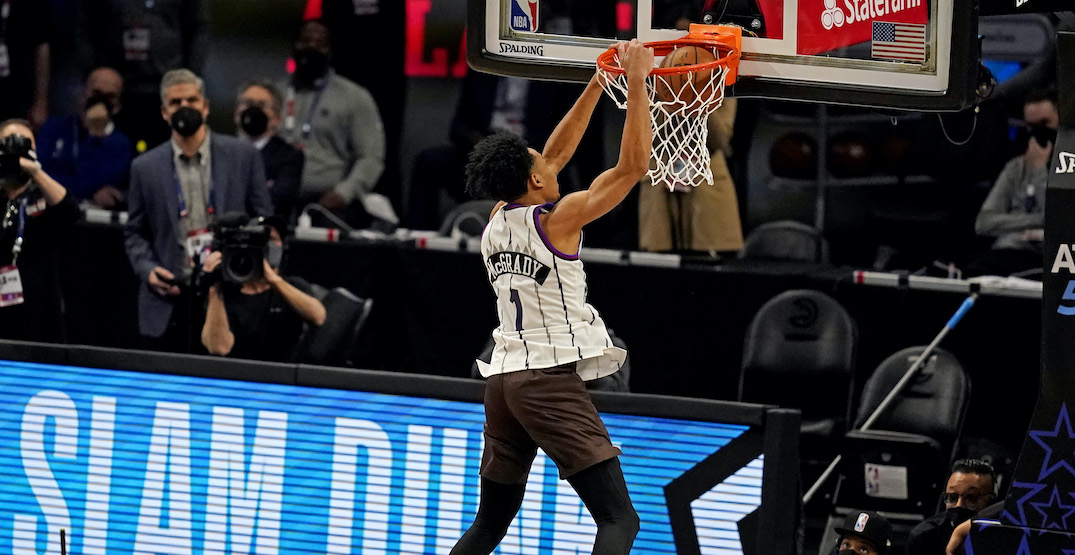 Twenty-one years after the famous 2000 dunk contest, which saw terrific dunks from both McGrady and eventual winner Vince Carter, Simons decided to turn back the clock. He was sporting a vintage McGrady jersey from his time with the Raptors for his second dunk, then recreated McGrady’s third dunk from the 2000 contest, which earned him a 49.

Anfernee Simons throws it back to Raptors-era Tracy McGrady from the 2000 dunk contest! pic.twitter.com/e5ynca1YIO

Many former performers have honoured famous dunkers in the past by wearing their jerseys while performing dunks. The likes of Josh Smith (Dominique Wilkins jersey), DeMar DeRozan (Vince Carter jersey), and Larry Nance Jr. (Larry Nance Sr. jersey) have all done it before, and Simons was one of the latest to join in on the NBA tradition.

Here is what the original dunk looked liked when McGrady performed it, which earned him a perfect 50 score from the judges.

On the first set of dunks, Stanley and Toppin went between the legs, and Simons showed off his hops by grabbing the ball as it sat on a Nerf hoop above the rectangle on the backboard.

All of #NBAAllStar in One Night LIVE NOW on TNT pic.twitter.com/PtqZWgVIXm

SIMONS GETTING WAYYY UP.. WATCH #NBAALLSTAR ON TNT!

Overall, the event was seen as a disappointment, as Magic Johnson admitted, potentially due to the lack of fans and lack of household names in the event. However, the McGrady dunk Simons unleashed may have been the best one of the night.