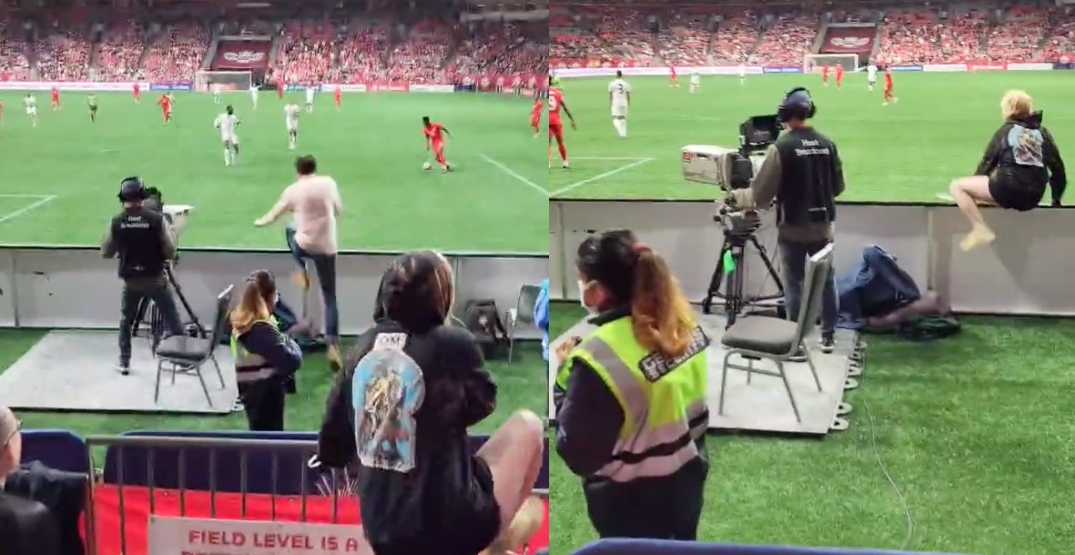 BC Place security has a well-earned reputation.

On Thursday night, it was exposed yet again.

Two pitch invaders were able to get onto the field during a match featuring the Canadian men’s national soccer team. They were protesting the cutting of old-growth forests, doing so by interrupting the match by each attaching themselves to a goal post.

Players on the pitch were left to deal with the protesters, with members of Curaçao’s team nearly getting involved. Security, not surprisingly, was slow to catch up.

A video posted by Save Old Growth shows just how easy of a time the protesters had getting onto the field in the first place. A secondary fence and a scattering of security guards did nothing to deter the protesters, who didn’t need to think of anything clever to get through the weak line of defence.

A man was first to leap onto the turf, over the secondary fence, and onto the field of play — all before the nearest security guard uncrossed her arms. That security guard was then caught looking at the man she let run past her, while a woman hopped the fence and snuck by her as well.

Like successful movements of the past we must disrupt a way of life that is threatening our future.

Destroying BCs remaining old growth during a climate crisis will cause further suffering and loss for people across the province.

The protesters were nonviolent, so nobody was hurt. But what if they had different motivations?

Shouldn’t security be doing more to keep the place secure?

“The safety and security of our players, fans, and staff is of the utmost priority at BC Place,” read a BC Place statement shared with Daily Hive.

“Recognizing field intrusions are a growing problem across many stadiums, BC Place is working closely with our partners including the VPD, our clients, and contractors to address this safety and security issue.

“As part of our ongoing processes, the BC Place team continuously reviews its security protocols, staffing, and training for events, including procedures related to field intrusions. We take these incidents seriously as they pose significant risk to the players and staff on the field.”

The biggest problem with Thursday is that this isn’t a new problem.

In 2018, a BC Lions player tackled a fan that ran onto the field, after security was slow to respond. In 2016, during a Canadian men’s national team match, it took Team Canada’s chiropractor to tackle the fan.

Two months ago a fan was able to run onto the field during a Vancouver Whitecaps FC match, and came close to players on both teams. After having his fun, the man then retreated back to the seats, and ran up the stairs. Security never came close to him.

And those are just some of the more famous examples.