TransLink is reporting the SkyTrain has shut down coming out of downtown Vancouver.

Just before 3:00 p.m., a power issue at Stadium Station and the Main St.-Science World Station shut down both eastbound and westbound Expo and Millenium Line service between Downtown and Broadway-Commercial. The trains had been experiencing delays prior to the electrical problem.

A shuttle bus is being implemented to run between affected stations. TransLink says crews are working hard to restore full service, but passengers should expect delays and allow extra travel time.

The Millennium Line is currently only running between VCC-Clark and Columbia stations and the Expo Line between King George and Broadway stations. The Canada Line is not effected by this service disruption, but long lines and waits have been reported.

The rest of Vancouver’s transit network will no doubt feel the strain as people turn to other forms of transport for their commute home. Shortly after the SkyTrain incident a lineup more than a block long had already formed at the bus stop at Pender and Granville.

Some on Twitter are already reporting being stuck on a train between Stadium and Main St. Station for over one hour.

There is no indication of when regular train service will resume. Acting CEO Cathy McLay is “very optimistic” service will return to normal by morning. 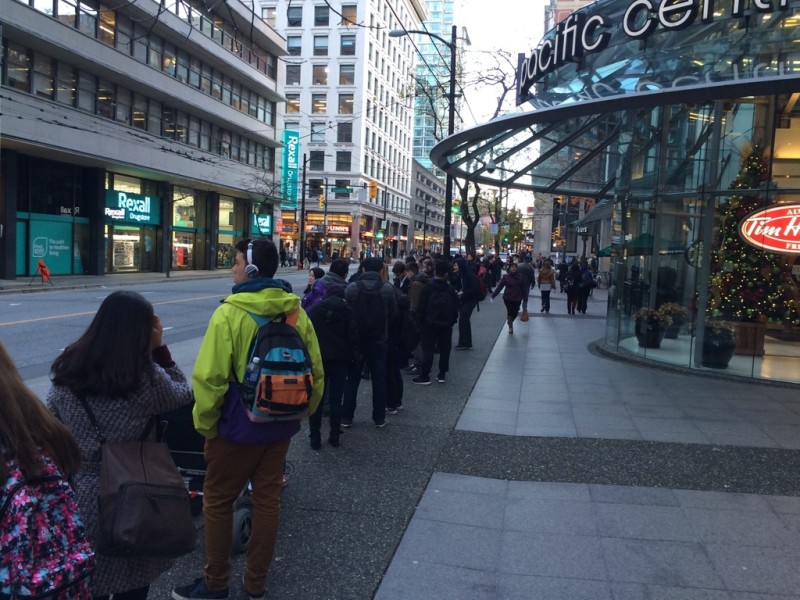 Still stuck after an hour. We have to move to another train. #skytrain #TranslinkIsEvil pic.twitter.com/PvIqZDaWjG

Anyone thinking of getting on at Columbia… #SkyTrain pic.twitter.com/1Dsn4pM3x8

Hordes of people crowding the 99 B-Line, trying to make it to downtown. Skytrain not running west of Burrard. pic.twitter.com/RO8JERRTlr — Kamil Karamali (@CBCKamil) November 24, 2015