The tunnel boring machine for the SkyTrain Evergreen Line has been operating around the clock with no issues since it restarted in mid-September near the intersection of Seaview Drive and Clarke Road.

As of today, the tunnel boring aspect of the rapid transit project is within metres of completion: A breakthrough at the south end of the tunnel, at the intersection of Kemsley Avenue and Clarke Road, is likely to occur within days if all goes well.

On November 23, the SELI-operated tunnel boring machine was approximately 80 metres away from reaching the south portal pit, where the SkyTrain route will rise out of the ground and transition into an elevated guideway. The tunnel boring machine builds about 10 metres of new tunnel length per day, but it could theoretically exceed this speed if conditions are optimal.

A spokesperson with the Ministry of Transportation was not able to comment on the progress of the tunnel boring project. 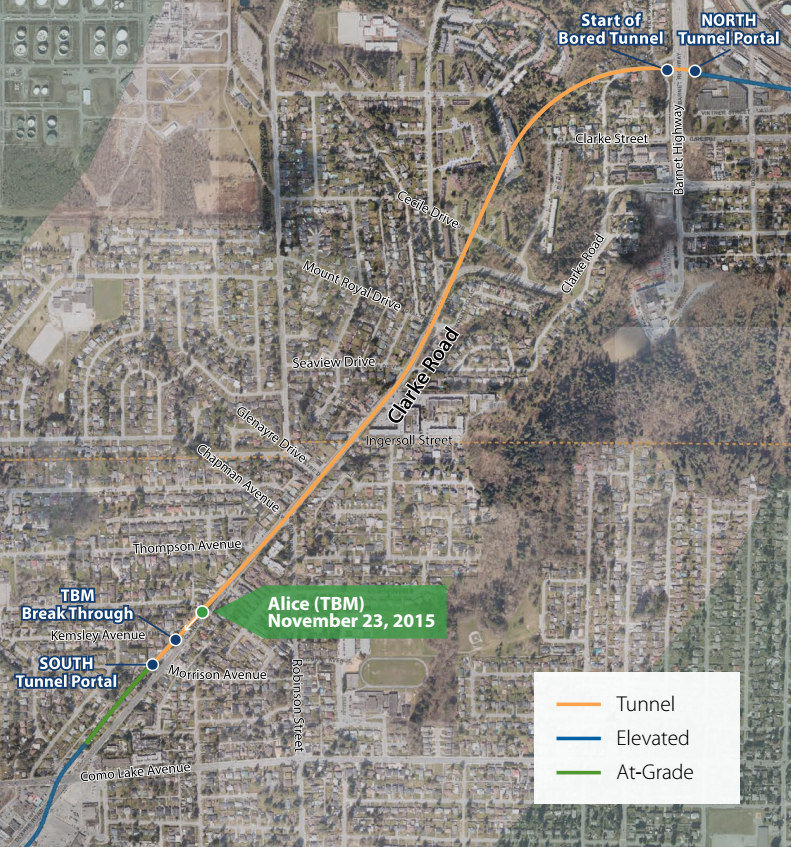 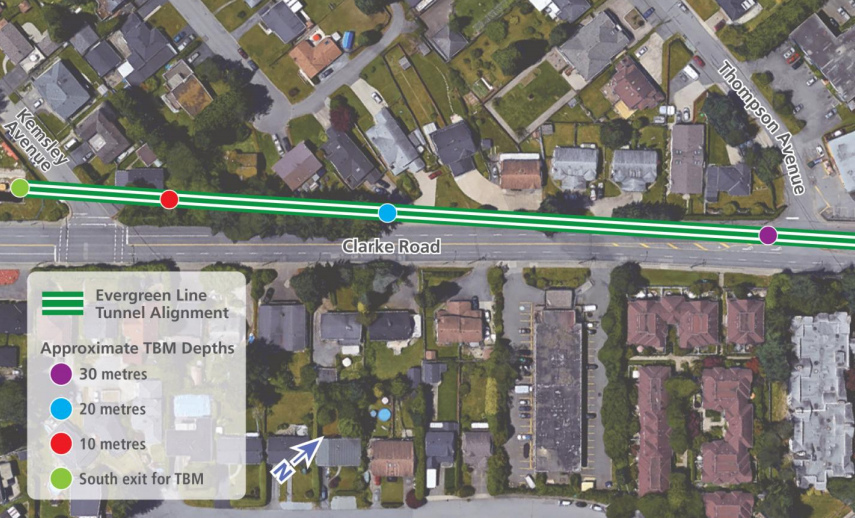 The Evergreen Line’s underground span is 2.2 kilometres long beginning near Clarke Street. Tunnel boring first started in March 2014 and was originally slated for a completion within a 200-day schedule, but the machine encountered issues due to challenging soil conditions.

The tunnel route travels through loose glacial till deposits, requiring more maintenance work to be performed on the machine’s drilling head. But this also required the stoppage of the machine, which caused a number of small surface sinkholes to form directly above where the machine stopped for maintenance.

Unlike the Canada Line’s tunnel boring project, only one tunnel boring pass is required for the Evergreen Line. After tunnel boring is fully complete, the single 10-metre diameter wide tunnel will be divided with a wall to separate the trains traveling in the opposite directions. This will be followed by the installation of tracks and other systems.

Delays with the tunnel boring project have pushed the Evergreen Line’s opening from summer 2016 to fall 2016. The remaining areas of the project, including the stations, elevated guideways, and at-grade guideways, are on schedule and train movement testing is well underway.

The Evergreen Line is a $1.4 billion project funded by the provincial and federal governments and TransLink. Any construction overruns incurred by the project are within the responsibility of the private contractor, SNC-Lavalin. The tunnel boring project was subcontracted to SELI, the Italian tunnel building company that also built the Canada Line’s bored tunnels.

The provincial government is overseeing the design and construction process and a handover to TransLink for operational control is still anticipated for next year.

Approximately 50,000 riders are expected to ride the Evergreen Line when it opens. Trains will travel from VCC-Clark Station in Vancouver to Lafarge Lake-Douglas Station in Coquitlam in less than 35 minutes.