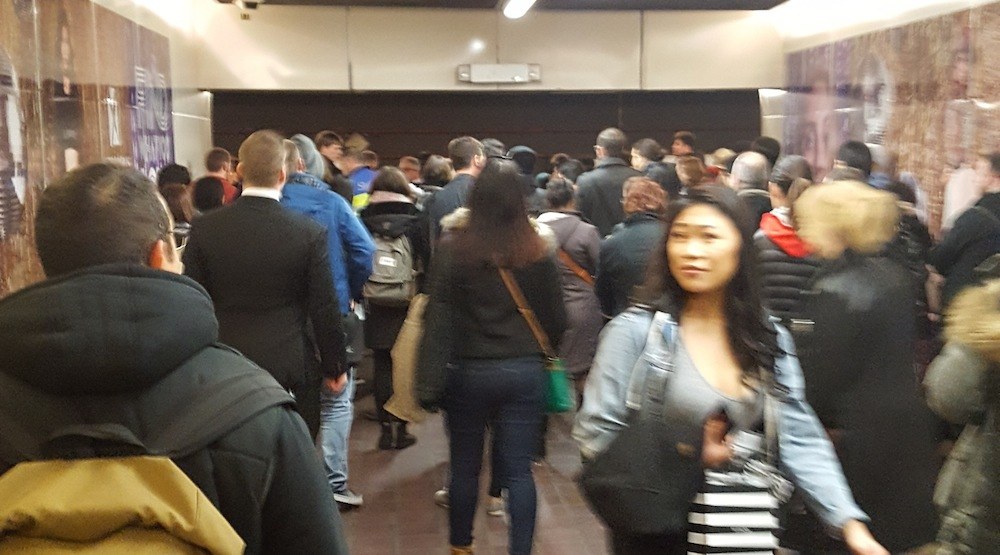 Crowds at a SkyTrain station during a system disruption. (Daily Hive)

UPDATE at 5 pm: TransLink says Stadium-Chinatown Station and the Hudson’s Bay entrance into Granville Station are both closed due to overcrowding. Passengers are being asked to use the bus bridge shuttle service. There is no estimated time for when regular train service will resume.

A track issue that began at approximately 3 pm is causing delays on the Expo Line ahead of rush hour in Vancouver. Some stations could experience overcrowding as a result of the delays.

“A track issue has caused a delay to SkyTrain service on the Expo Line,” TransLink said in a release.

“Our crews are on scene, and working hard to restore full service, but passengers should expect some delays.”

A shuttle train is currently operating between Stadium-Chinatown and Commercial-Broadway stations, meaning customers travelling beyond this section of the line must transfer at these stations.

TransLink is in the process of creating a bus bridge shuttle service between the affected stations – from Waterfront to Commercial-Broadway. Passengers are asked to look for the “Bus Bridge” bus stop sign outside the stations.

Canada Line and Millennium Line are unaffected, and are running normally.

Additional security and Transit Police are at the stations to ensure passenger safety and crowd control.