The Full Flex Express tour was at its epic conclusion Sunday night at the Pacific Coliseum. Doors opened at 6:00pm for the smaller outdoor stage which included performances by KOAN Sound, Hundred Waters, and Tokimonsta. 8:00pm came and the event moved inside where Grimes (Vancouver’s proud creation) and Blood Diamonds were the first to hit the stage.

The Grimes show began slow as the crowd was timidly awaiting who they came to see – Diplo, Pretty Lights, and of course, Skrillex (check out a great interview by Nardwuar with him). This led to the crowd mostly standing around disinterested in the Grimes set but slowly began waking up as her more danceable tracks – “Oblivion” and “Be a Body” were dropped with additional electro and dubstep effects. One particular aspect I noticed about this Grimes show was that the addition of Blood Diamonds limited the movements of Grimes herself. Usually on deck with four different instruments she bounces around a lot with dancing, head banging, and whatnot, but the additional musician can cramp the stage a little bit and changes the dynamic. Nonetheless Blood Diamonds is a fantastic artist and if the two continue performances together I can envision something really cool coming out of it. By the time Phonesex was dropped the crowd was in full force, both woken up to the Grimes set and the anticipation of Diplo. 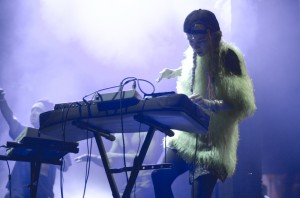 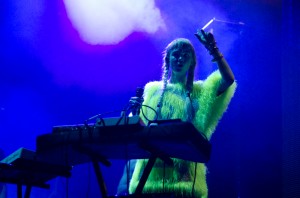 While Grimes released an energetic feel to the night, the show truly started as Diplo made it to the stage. His fidget style electronic mixed with quick chunky bass notes and a twist of rap got the crowd hyped up. He played some of his well-known songs like “C’mon”, which was released alongside Tiesto. “Express Yourself,” as well as some of his newer tracks. In addition, he was also able to mix in Lil Wayne, Rick Ross and Kanye West into his set. It reminded me of Avicii as he also dropped a Kanye song to finish his set. Diplo constantly asked the crowd how they were feeling (perhaps a few too many times) and wanted to make sure he put on a good show. I found the set to be on par with what I was expecting, but the crowd certainly got it up to the next level…especially when he dove into them for a massive crowd surf.

Pretty Lights stepped up to the decks a little after 10:00pm. As the show continued, everything seemed to get better. In Pretty Lights’ case, he had phenomenal lighting. Not only did he have big swift lights throwing themselves over the audience, he also had an amazing array of L.E.D. lights with spectacular patterns synced to his hefty dubstep songs. His style is unique because while he plays some heavy bangers, he also has a funkier side to beats. He regularly spoke on the mic with crowd, as did all the other artists. He thanked Vancouver and expressed his gratitude to be playing for everyone. He played a great set and I look forward to seeing more from him.

Going into the Skrillex show I honestly had no idea what to expect. I am not particularly hyped on his music and rarely listen to it on my own. A minute before he was set to begin I was pulled backstage in which he gave a motivational speech to all the fellow Full Flex artists, thanked them, and all did a cheer. Watching him walk up stage to his rendition of an X-wing fighter jet to a ballistic crowd was like watching this generations’ electro version of Hendrix do his thing. Dubstep is not my musical niche, but again, I was incredibly impressed with Skrillex, he controlled the seething crowd in a way I have rarely seen before. Taking us on a roller coaster of bass he supplied hits from dubstep, moombahton, and perfectly planting reggae when it was needed. Skrillex’s set was as close to perfect for what I’ve seen and usually I am critical of even my favourite artists. On top of this he is such an awesome guy, shaking hands with everyone, giving hugs, thanks, and after-party passes to all the stage crew, which was one of the cooler things I saw that night. 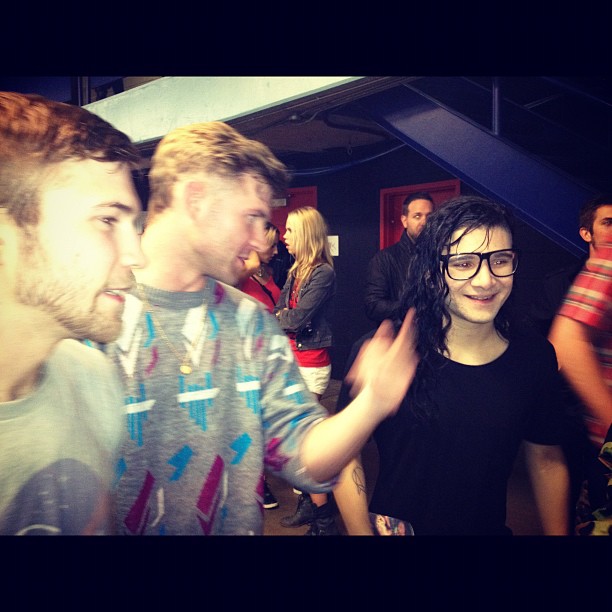 It was a different type of show than what I usually attend but it was a fantastic night with great music and an awesome atmosphere. I can’t recommend this music to everyone as it is aggressive but if you are one that likes to let loose when partying than I definitely recommend checking out any of these artists.

Written by the Cascadia Records team