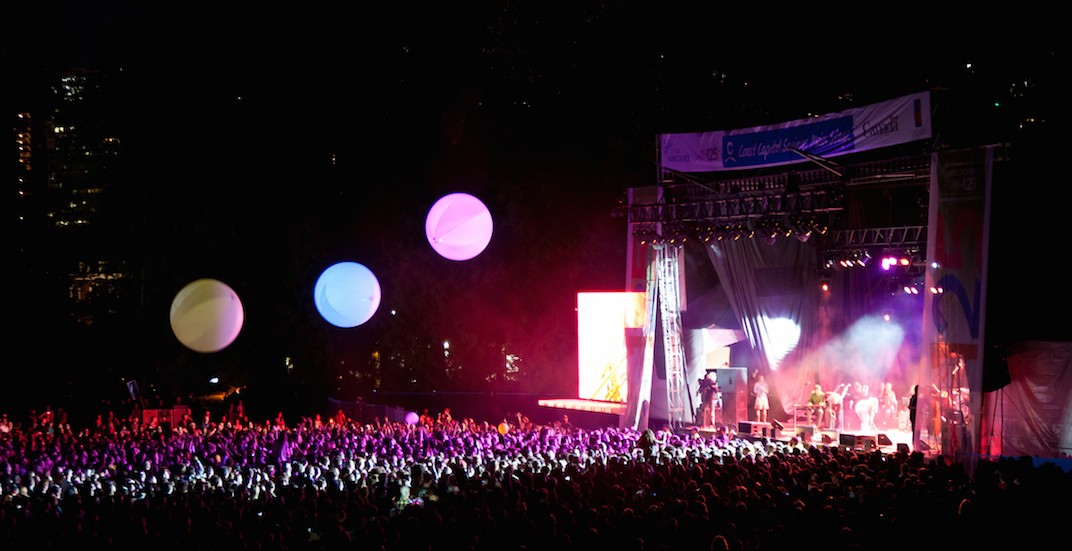 An outdoor concert at Stanley Park's Brockton Field as part of the Vancouver 125 festivities in 2011. (Bar Perry / Flickr)

BRAND LIVE, the event production company responsible for events such as Squamish Valley Music Festival (SVMF) and Honda Celebration of Light, is set to make a comeback with SKOOKUM – a three-day music festival held at Brockton Field in Stanley Park from Friday, September 7 to Sunday, September 9, 2018.

According to a release, the 17-acre venue will have a capacity for 20,000 attendees per day in its first year.

There will be multiple stages featuring the best contemporary music across broad genres, styles, and cultures.

The site will be animated with live and multimedia art installations, in addition to roaming talent and surprise pop-up performances.

The trees at Brockton Field in Stanley Park are used as the canvas for projection lighting during Vancouver 125 celebrations in 2011. (City of Vancouver)

A “sophisticated” food and beverage program will be offered to provide unique culinary experiences, along with tasting areas that showcase the best BC wines, craft beers, and craft distilleries.

There will also be ‘SKOOKUM After Dark’ – a series of late night events in downtown to keep the partying going.

“This festival is the result of a conversation that began five years ago to create a more accessible and inclusive festival for Vancouver and British Columbia,” said Paul Runnals, the Festival Director of SKOOKUM and a Partner at BRAND LIVE, in a statement.

“We want to evolve the festival experience and establish a new standard for creative expression across the three pillars of Music, Food and Art – all set in one of the most spectacular locations in the world. SKOOKUM is the embodiment of this vision and we could not be more excited to share this announcement.”

Brockton Field is not a new stomping ground for BRAND LIVE, which staged the 2012 Voices in the Park concert, with performances by Sarah McLachlan and Bryan Adams and an appearance by Bill Clinton. This one-day event attracted 11,000 attendees.

As well, Brockton Field has been used for a number of other events and festivals, including the Sunset Festival for the annual lululemon Seahweeze Half-Marathon.

The new urban festival in a park could also fill much of the void in BC’s festival culture left by the cancellation of SVMF. It promises to be bigger than Live Nation’s FVDED In The Park, held in Surrey.

Festival organizers will announce the artist line-up for SKOOKUM in spring 2018.