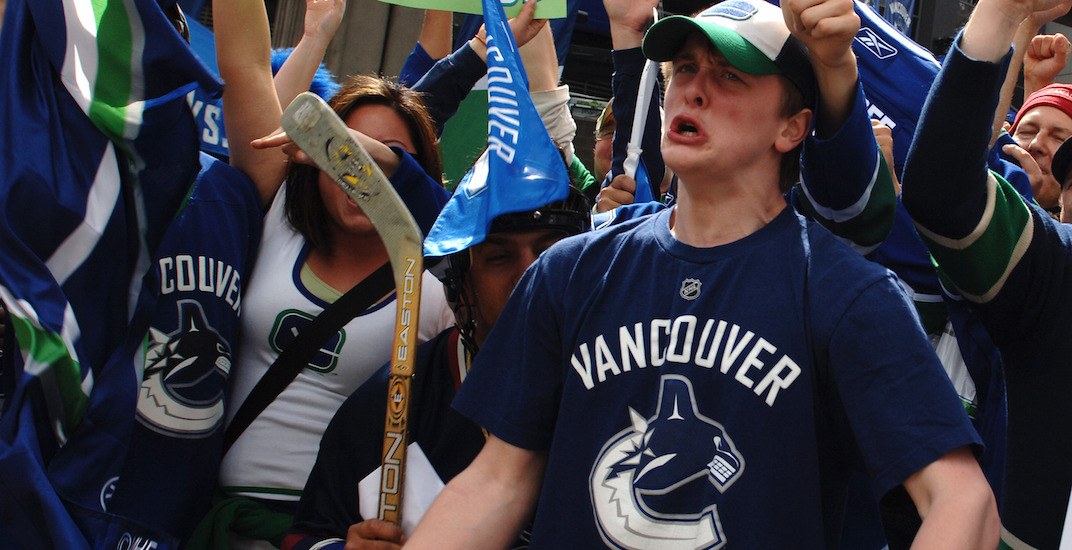 Welcome to the first edition of a new regular feature on Daily Hive, the SixPack!

Borrowing the name from our former post-game report, the SixPack is the place to get all the hot takes you know and love from Omar on the Vancouver Canucks.

Do you remember that year? Following the team was like watching a soap opera – one like the O.C. where hundreds of crazy things happened each episode. John Tortorella stormed Calgary’s dressing room, Ryan Kesler secretly demanded a trade, Eddie Lack started the Heritage Classic instead of Roberto Luongo… and Luongo was traded.

And that’s just the top five events of that season. I remember being glued to Twitter all day long just waiting to see what would happen next.

This week, it felt like that again, and it started before Elliotte Friedman strapped TNT to it all and hit the detonate button.

@FriedgeHNIC so you’ll sit there with your French Cuffs, pant legs pulled up so we see your fancy socks, and tell us working class folks we’re negative because we grow tired of the 50 years of mediocrity, eh? You really are clueless. I will turn up my criticism of the Canucks

What Friedman doesn’t realize is “Angry Canucks Twitter” was never really some galvanized mass of wild dogs out to tear Benning and Linden apart. What often causes so much intensity within the group is they’re usually fighting with each other – those who are not fans of Linden and Benning’s way of running the team, and those who want to preach patience and positivity always.

The events of the last three weeks – Benning’s re-signing, followed by Gudbranson’s contract extension, followed by a nearly silent trade deadline for Vancouver – had the two sides throwing metaphorical haymakers at each other wherever you looked.

Then Friedman threw his grenade.

To be clear, Friedman is amazing at what he does. He knows everything happening in the league and he is a must follow. Also, when he is asked for his own educated opinion, he’s right on the ball – not stuck to old-school views as many are.

But this take, it was just off.

All of it did, however, make Canucks Twitter a fun place to be for the first time since 2014.

And if you enjoy that kind of thing, you have to thank Trevor Linden, Jim Benning, and Elliotte Friedman for that.

2. How Vancouver was united

Vancouver fans and media could be the reason the team hasn’t won? Players may not want to come here in the future because of the coverage?

The good thing about Friedman’s off-base rant is it galvanized Vancouverites in a way only insulting the Sedins has done before.

You think the Sedins are soft? The Sedins are two of the toughest players in the NHL you sh**head!! Hold up, DID I HEAR YOU SAY SAY THE WORD SISTERS? Oh you’ve done it now…

Anyway, back to the galvanizing of the fan-base, there have been some great takedowns. Harrison Mooney and Wyatt Arndt had pieces up right away, Ed Willes came off the top rope with his own pile driver. And Botch followed up in the Provies with some great points of his own.

Adding a couple thoughts of my own to the noise:

Last year, when Benning was making trade after trade, he stoked some serious hope in Canucks fans. Not only did they feel the team was finally ready to go into full rebuild mode because of the moves, they looked at the returns and thought – wow, Benning did that?

Jonathan Dahlen and Nikolay Goldobin had fans excited. They made people think, wow, given more assets, and that he’s finally admitted the team is rebuilding, what will Benning do next?

But then, with a fresh three-year extension in his pocket, Benning took a massive step back.

Rather than making the most obvious rebuild move of all, the one everyone but the most old-school hockey men were calling for by trading Gudbranson, they re-signed him.

Then, rather than going out there and making great trades for the future of this team, there was almost nothing. Meanwhile, teams that don’t need to rebuild nearly as badly as Vancouver does, teams like the New York Rangers, were out there doing serious rebuild work.

After seeing that, even the most-enthusiastic Benning supporters knew they were intentionally putting lipstick on a pig as they continued their “be patient!” rants.

So if you’re really clueless about why there is so much anger and so many upset fans in Vancouver, look no further than the hope Linden and Benning gave this city through their own words and actions.

The direction – we’re rebuilding, we want to get younger and faster – is great, but the execution – if you look at the cap hits, the core of this team includes Erik Gudbranson, Brandon Sutter, and Loui Eriksson – is flawed.

And Canucks Army’s J.D. Burke summed it all up very well on February 26, with this:

Here's something I wonder about with the Canucks… Why are they *this* attached to a roster that's this bad? What's stopping them from stripping this to the ground? 29th in points percentage last three years. Not like they're preventing a tailspin as is. Curious stubbornness.

That now-famous quote from Benning on the day he signed his contract extension proved to be a miscalculation when you see that 19 2018 draft picks were swapped in the lead up to the trade deadline.

Laurence Gilman, on with Sekeres and Price on TSN 1040 Wednesday, had a great explanation about how and why the value of draft picks fluctuate:

“Draft picks have their lowest value of the 365 day cycle on the trade deadline day. The minute that day passes and the next order of business is the draft, the value of those picks skyrocket.

“When you’re sitting at that (draft) table, and there’s a guy on the board, and you’re trying to get a pick from somebody, it’s like, ‘Are you kidding? My guys are salivating over picking a guy here. No chance.’”

Kind of tells you why having a bunch of draft picks can be so valuable as currency at the draft, even if you don’t want to use them all yourself.

One of the most interesting Gilman segments this week came when Sekeres asked why the team missed so many players “in their own back yard” while he and Mike Gillis were running the team.

“I would say that looking back objectively, we clearly undervalued players in the Western Hockey league…

“We undertook a study at a certain point in time to take a look – and this led to some of the changes we made in Mike’s final year where we put Eric Crawford in charge and we reassigned some people – we commissioned a study that showed we had historically – once your draft list has been created, it’s memorialized, so we could then go back and look at where we had guys placed and where they were selected and there was an infinite pattern that players were being taken well above where we had them on the overall list.”

Then, he was asked specifically if Ron Delorme was the right guy to be building the draft list.

“I believe Ron Delorme is not just a good scout, he’s an exceptional scout, but there’s a difference between knowing hockey players and being proficient at running an amateur scouting staff and producing a list.

“Producing the list that you utilize to go into that draft is like creating law, and it needs to be followed like the letter of the law, and quite honestly we felt there were systemic issues that needed to be addressed and the process needed to change.

“We’ve talked about this before – do I have regrets about the way we handled the amateur scouting staff, ya I do and the biggest one is I think we waited too long, but at the same time you had a lot of guys who had been with this organization a long long time and they needed to be given an opportunity to be properly evaluated.”

By the way, it was Crawford who was in charge of the scouting staff when Vancouver drafted Brock Boeser, meaning Gilman (and Gillis) deserves a ton of credit two of the biggest pieces of the team’s future core.

5. The ratio tells the story

Check out the ratio:

Anyways, the point to all this… like, be more kind to each other and others. Don’t take pride in being insufferable. Relax. The local team made mistakes years ago they prob regret. What’s done is done. They’re headed in right direction, way slower than anyone wanted. Now what?

And the best reply:

Says the guy who poured beer on Scotty’s head because he doesn’t have enough “fun” 🙄. Yeah, ok bud.

Thinking of taking lessons on being kind and how to be more likeable from Andrew Walker?

A quick look at what outsiders (including Friedman, Marek, and Walker) see when they take a peek at Canucks Twitter:

Only the KHL would put tigers on the ice during intermission… pic.twitter.com/0OFTe8xn88

Be careful out there.