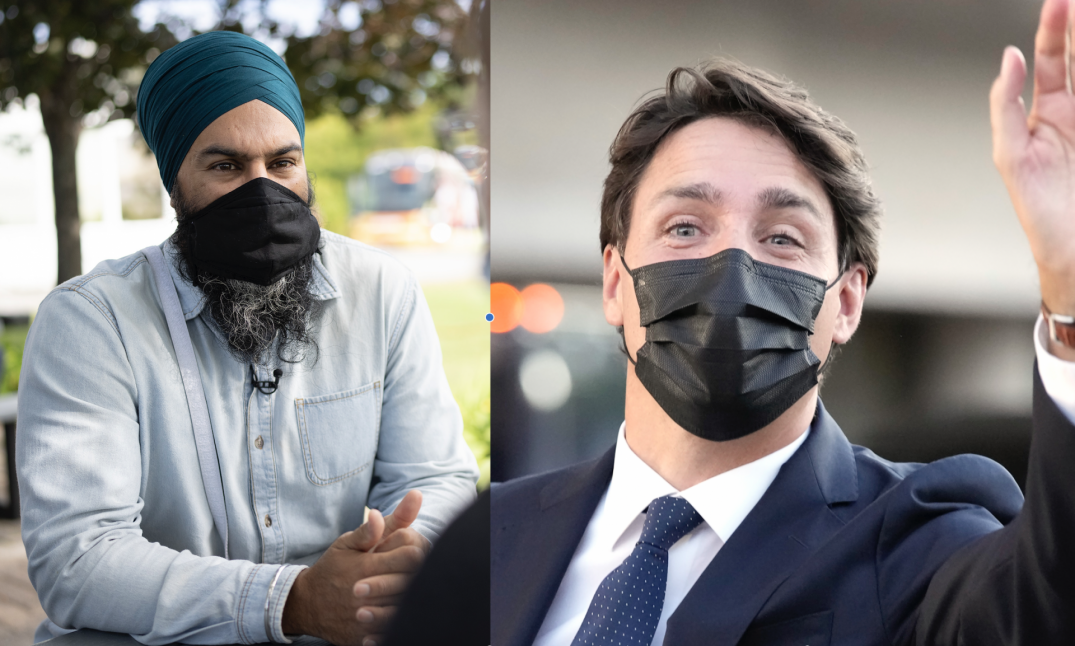 The federal New Democrats and Liberals made mirror pledges on Monday to criminalize protesters that block hospitals or harass healthcare workers as party leaders denounced planned demonstrations at hospitals nationwide.

A group calling itself Canadian Frontline Nurses looked to organize what it dubs “silent vigils” on Monday in response to public health restrictions aimed at slowing the spread of COVID-19, which they call “tyrannical measures and government overreach.”

Provincial and local politicians warned anyone showing up to not block hospital entrances, adding that police were ready to maintain access for patients, doctors and nurses if necessary.

Speaking in Sioux Lookout, Ontario, NDP Leader Jagmeet Singh said a federal government can’t ban protests, nor can it limit where people can demonstrate like provinces such as Ontario have done with bubbles around abortion clinics and farms.

But Singh pointed to the Criminal Code as a means to dissuade such demonstrations from happening. His party’s platform pledges to make it a federal offence to harass or obstruct someone from accessing medical care, and provide harsher penalties for anyone assaulting a healthcare worker.

He said protesting at hospitals was different than demonstrating elsewhere, such as rail lines, noting that blockading a hospital could mean someone dies.

“It is not the space, it is not the place to protest,” Singh said in front of his campaign plane in the northern Ontario town.

“If you’re in any way threatening healthcare workers, impeding their ability to go to work, you’re impeding patients’ access to care. If cancer patients aren’t being able to get into the hospital, that is just not on.”

The issue of vaccinations and how to respond to the pandemic has been a mainstay of the federal campaign, which wraps up in one week on September 20.

Anti-vaccine and anti-mask protesters have dogged Liberal Leader Justin Trudeau along the campaign trail, even pelting him with gravel at one stop, after he promised to forge ahead with mandatory vaccination rules for travellers.

Hours after Singh spoke, Trudeau outlined an identical pledge of criminal sanctions for anyone blocking access to hospitals, vaccine clinics, testing centres, pharmacies and abortion clinics, and those intimidating or harassing healthcare workers.

Speaking in Vancouver, Trudeau said the Criminal Code already has provisions about intimidating people who work in the justice system, but there is now a need to protect doctors and nurses in a similar way.

“It’s not OK any day to know that a nurse going into a late shift crossing a parking lot might be afraid that there could be someone there to spit on her or shout obscenities at her,” Trudeau said in his opening remarks.

The Liberal leader also took aim at Conservative Leader Erin O’Toole as Trudeau repeatedly looked to use the issue of vaccines and public health measures as a wedge.

Speaking in the rural Ottawa suburb of Carp, O’Toole said the planned protests “completely unacceptable,” calling for unity even as he denounced Trudeau with sharpened personal attacks.

“There is the ability to peacefully protest and things like this, but to harass and to try and block people from accessing health care in a pandemic is completely unacceptable,” O’Toole said.

“Now is the time for us to work together, using all the tools we have – including vaccines, rapid tests, distancing, masks – in our fight against COVID-19. We need to come together as a country in this crisis, not divide ourselves.”

Asked what he would do if elected, O’Toole said he trusted local officials to manage the situation.

Meanwhile, Green Party Leader Annamie Paul made a rare campaign stop outside of Toronto on Monday as she visited with party candidates in Prince Edward Island, a place where the Greens have made political inroad as the official opposition in the provincial legislature.

Monday marked the final of four days of advance polls, and Elections Canada said Sunday that 1.3 million people came out on Friday, more than what was recorded on the first day of advance polls in the 2019 vote.