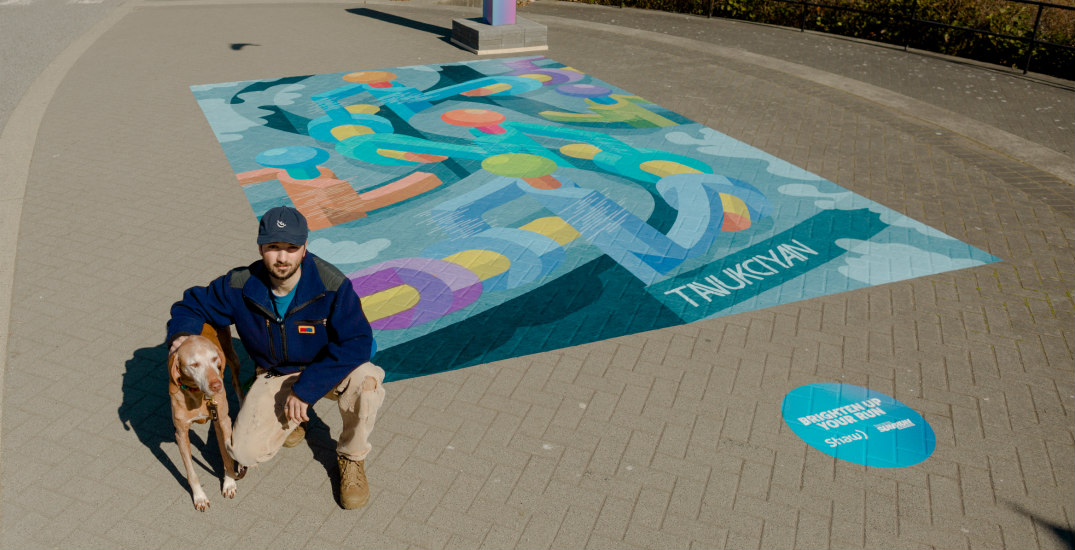 Visual artist Andrew Tavukciyan has been creating artwork for what he describes as his “whole life.” It’s his outlet for everything.

After making a compromise with his parents to study industrial design at Emily Carr University of Art and Design, Tavukciyan pivoted and followed his passion for art upon graduation — diving into volunteering with the Vancouver Mural Festival in 2016.

“It’s basically been snowballing since then,” Tavukciyan tells Daily Hive of his career as a professional artist. Fast forward to 2021, and he’s one of three artists that have been commissioned by Shaw Communications to create murals with a special impact — celebrating this year’s Vancouver Sun Run.

Tavukciyan, along with fellow local artists Carrielynn Victor and Grace Gihm, have each created a captivating art piece that evokes a sense of togetherness and belonging at a time when we have to be physically apart. 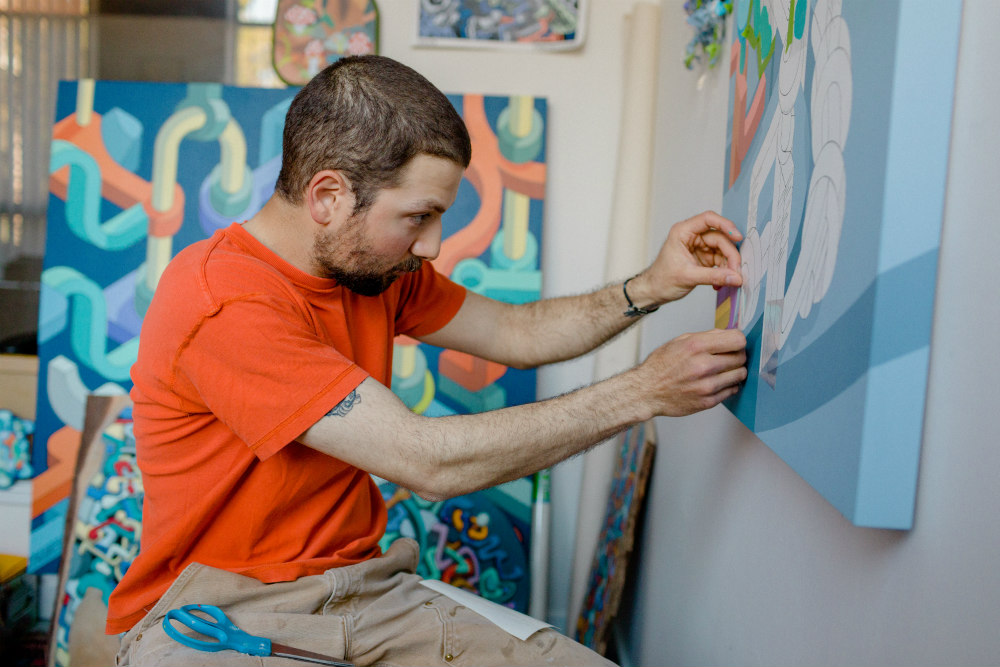 In 2020, Tavukciyan took part in the Vancouver Mural Festival’s Make Art While Apart campaign, which saw local artists painting boarded-up storefronts. During this time, he came up with the idea for the mural he’s currently working on.

“It had a similar theme of isolation and staying connected during this time. So, I wanted to expand on that idea, but in this sense, engage with the running community this time,” he says.

When conceiving the piece, Tavukciyan says he felt inspired by the concepts of isolation and togetherness that many have felt during the COVID-19 pandemic. This dichotomy can be seen in the way elements begin apart, but flow together as the piece progresses.

Tavukciyan’s piece also layers in elements of running into the concept of togetherness, with individual elements reaching out to grab relay batons as they pull one another forward. “We’re all pulling each other through this journey,” he says.

The artist has been hard at work on his vinyl application piece since being commissioned to create his piece over a month ago, refining his concept and design along the way. First, he began sketching on his iPad to get a digital version of his work, and from there, he started mapping out the physical painting.

“The idea is that the physical painting is being converted into a digital file but is then being printed and then applied to the ground,” Tavukciyan explains. 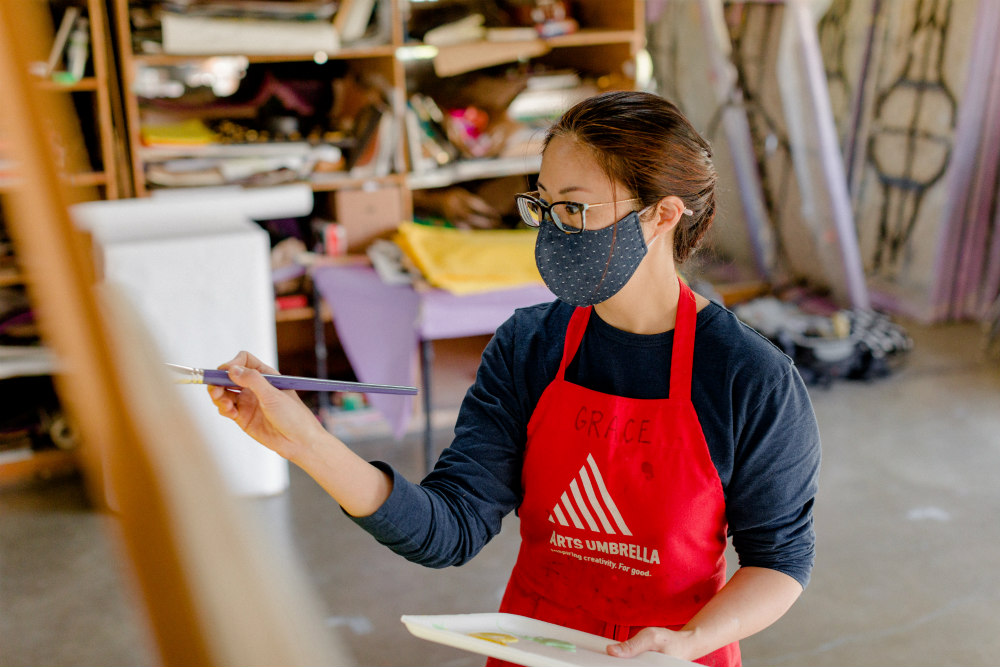 The Vancouver Sun Run is one of BC’s most iconic events, and it’s been Canada’s largest 10 km road race since its inception in 1985. This year, it’s going virtual to keep participants safe during the COVID-19 pandemic, allowing runners to join from anywhere and run at any time from now through Friday, April 30.

Shaw has been a partner of the event for nearly 20 years, and the telecommunications provider wanted to do something that would celebrate the efforts of runners and engage the Vancouver community in a way that respected safety and health protocols. This led to the partnership with Tavukciyan, Victor, and Gihm.

“In a typical year, tens of thousands of people take part in the Sun Run whether they’re running or cheering on a loved one, and the energy at the start line is electric,” Chethan Lakshman, Vice President of External Affairs at Shaw Communications, tells us.

“The murals provide a beacon around which runners can plan their route and, when they post pictures to social media, is another way runners can celebrate their participation in the Vancouver Sun Run while giving visibility to the new work of local artists,” he says.

Whether you’re participating in this year’s virtual event or simply taking a scenic stroll, you can find Tavukciyan’s piece at the Chilco Pump Station before the entrance to Stanley Park. Meanwhile, Victor’s mural will be at the Trout Lake Community Centre at John Hendry Park and Gihm’s at Marinaside Crescent in Yaletown. 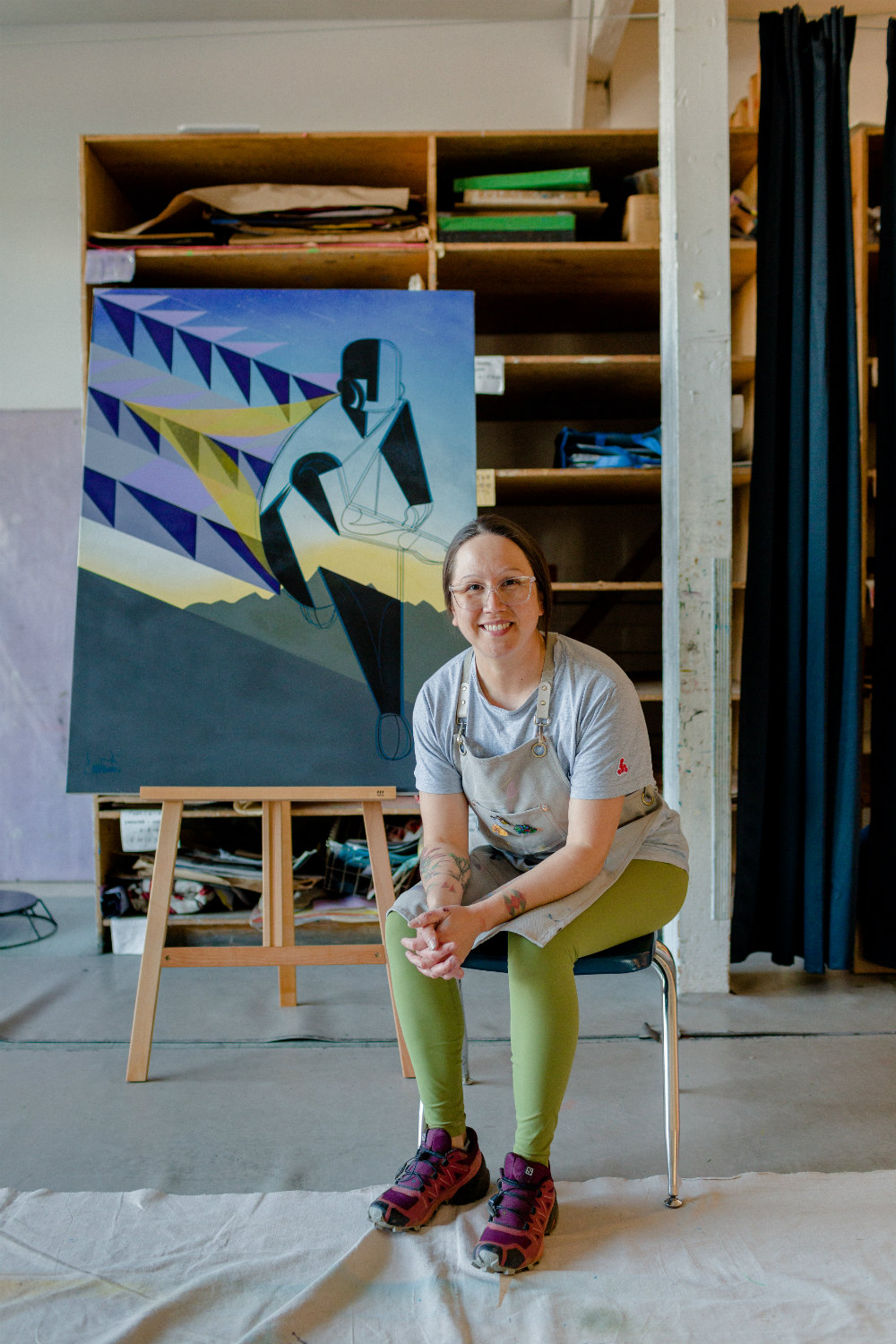 Tavukciyan says he’s happy to be involved in celebrating this year’s Vancouver Sun Run and encourages runners to enjoy the race while keeping an eye out for the three murals located throughout the city.

Anyone who takes photos of the murals at Marinaside Crescent, the Chilco Pump Station, and John Hendry Park can share them on social media using the hashtag #ShawBrightRun. When you do, Shaw will donate $5 to Arts Umbrella, up to $25,000, to support their arts education programming for kids in the region.

The murals are temporary and will be in place until the virtual race period ends on April 30. Lakshman urges Vancouverites to follow all public health and safety guidelines, especially social distancing, when they visit the murals.

“Above all, we hope the elements of our partnership with the Sun Run, from the Shaw Team Division, the Shaw Mini Sun Run, the Vancouver Sun Run Club powered by Shaw on Strava to the installation of these remarkable murals by local artists, give people a reason to get outside and get active,” he says.

“We know it’s been an exceptionally challenging year for everyone, and we hope the art, in particular, will be able to energize people’s optimism this spring.”

To learn more, head to vancouversunrun.com/ShawBrightRun.