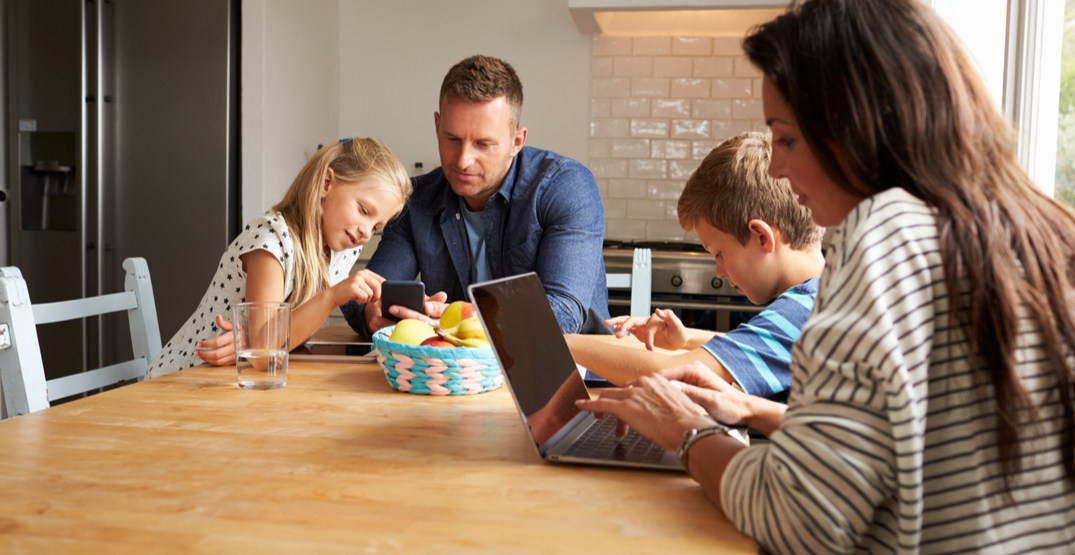 It’s 2019 and every family has a relationship with the internet.

Having access to the internet benefits us in so many ways, from accessing education to entertainment. But with Canadians spending a minimum of three to four hours per day on the internet, how can we balance the time we spend online with the time that we’re offline?

Thankfully Shaw has found a way with their new WiFi experience — BlueCurve — which unlocks a suite of tech that lets you reclaim quality time with your favourite people. With the BlueCurve Home app, you have total control of your WiFi experience so you can pause or schedule WiFi downtimes directly from your phone when you need them, whether it’s during dinner or at bedtime.

Shaw recently gave local families (and familiar faces) the opportunity to try BlueCurve in their homes.

As a mom, CEO of first-to-market coaching app company Sphere, co-founder of Blo Blow Dry Bar, and a social justice advocate, Devon Brooks has a busy schedule. So when she tried the BlueCurve Home app and BlueCurve Pods (Shaw’s sleek, wireless WiFi extenders that you can plug into your wall outlet), she discovered it led to better coverage for her to stream while in bed, which she says is the only time she gets to watch a show from start to finish. But most importantly, she appreciates the fact that the BlueCurve Home app lets her set ground rules.

“I can control the WiFi connectivity to each device from the app and shut down,” she says. This gives her more time to savour the special moments with her children as it lets her limit the amount of time they have on their iPad.

Another BC-based mom who appreciates the flexibility of BlueCurve is ski cross world champion and Olympic gold medalist, Ashleigh McIvor. McIvor, who’s married to former Whitecaps captain Jay DeMerit, describes them as an “on-the-move, divide-and-conquer type family.” Busy travel schedules often result in many of their family catchups happening via FaceTime (seriously, where would we be without video technology?), which is why she relies on a strong internet connection to keep her favourite people close, even from across the globe.

The ability to manage each member of the family’s screen time, as well as schedule times where you can “pause” each device, is what DeMerit values most. He says that this “leaves more time for togetherness and connectivity of the human kind.” DeMerit has been pausing his screen time until 9 am for breakfast and again at 6 pm for an evening activity, or in one case, pausing McIvor’s computer so that she can be there for family time.

Shaw BlueCurve lets you set parental controls and profiles for each user or connected device in your home, allowing you to strike the perfect balance of screen time and family time.

For more information on how BlueCurve could benefit your family and to sign up, visit Shaw now.