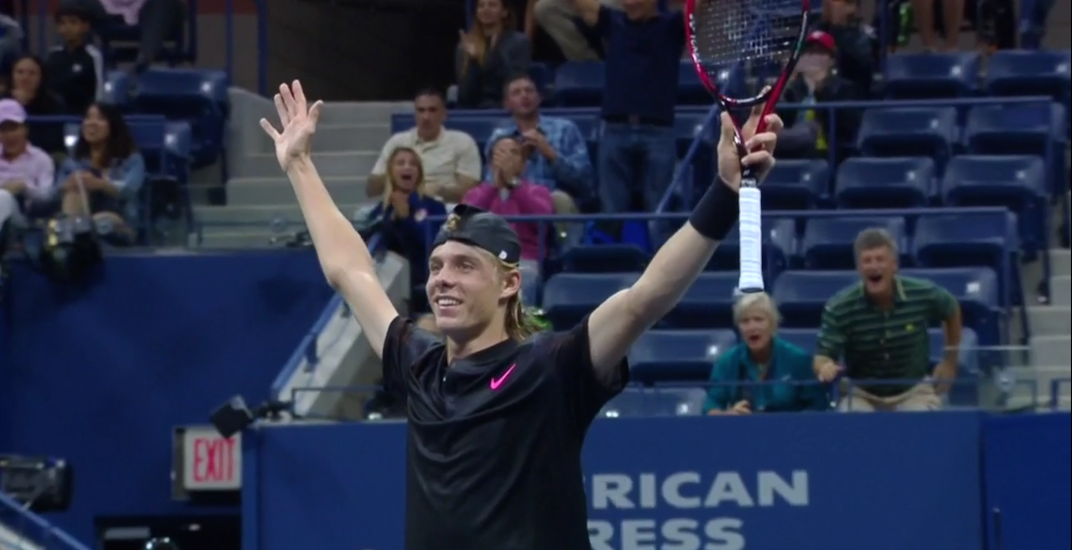 If New Yorkers are smart, they’ll jump on the Shapovalov train now.

It has already departed, it’s full of supporters, and it’s hard to see it slowing down.

Denis Shapovalov is through to the third round at a Grand Slam for the first time after beating eighth-seed Jo-Wilfred Tsonga at the US Open Wednesday.

From the first game of the match, with Tsonga serving, Shapovalov unleashed a barrage of heavy forehands and backhands. He quickly broke the Frenchman without Tsonga having won a point.

Speaking on court with ESPN’s Brad Gilbert after the match, Shapovalov said getting the first break made him loosen up. From there, he held his own serve and jumped out to a quick 2-0 lead.

With two break point opportunities in the first two sets, the 18-year-old capitalized on both, while never faltering on his own serves.

Then, after breaking again in the third and serving for the match at 5-4, the realization of what he was about to accomplish likely went through his mind.

“I played free up until I had to serve for the match,” he said to ESPN.

“Then I got a little bit tight.”

The Canadian lost that game and Tsonga forced him to a third set tiebreaker. There, Denis the Menace once again rose to the occasion, dominating, and winning it 7-3.

The experts are impressed

If you think it’s only a bunch of tennis-starved Canadians getting over excited for Shapovalov, you’d be surprised.

You may have heard of this guy:

Two New York Times sports writers are on board too:

Denis Shapovalov is a star in the making. So athletic, so much fun to watch. He’s the most underrated of the up-and-coming young players

US Open night session meets Shapovalov and both are the beneficiaries

Tennis writer Carole Bouchard, who follows the ATP tour around the world:

And the final word:

This kid is for real @denis_shapo @usopen @espn

Shapovalov will face world No. 42 Kyle Edmund in the third round Friday.

While their record against each other is 1-1, with the way the Canadian’s been playing this summer, Edmund is beatable.

In case you’re not excited enough, fourth-seed Alexander Zverev, the top-seed in the bottom half of the draw and the one who beat Shapovalov in the semi final at the Rogers Cup two weeks ago, lost earlier Wednesday.

Meaning aside from fifth-seed Marin Cilic the path to the final isn’t exactly littered with massive tests. Oh, and Cilic hasn’t played since Wimbledon because of injury issues.

Could the 18-year-old come out on the global stage much quicker than anyone expected?

It is very possible. And you had better not miss a second of his run as it unfolds.