Some Simon Fraser University students might have been bemused to have received an email from Batman on May 6.

The email sent to the students of SFU’s Beedie School of Business was a ‘crime report’ from the caped crusader, with the subject title ‘Kawabunga.’ 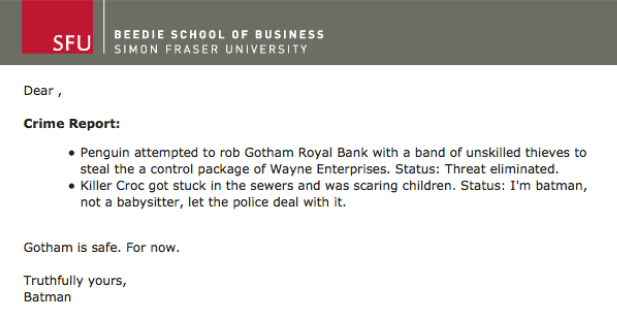 Students received the message from the school’s noreply[at]sfu.ca address and it even used the official email letterhead.

Some students thought it might have been a prank or someone hacked into the university’s network.

However, it turns out the email was sent in error by SFU’s web developer. The following email was sent to students shortly after university officials became aware of the mistake:

Today, May 6th, you received an email with the subject ‘Kawabunga’, with a Batman theme. This was a mistake by a web developer on our staff. It was a testing email that our team uses to make sure our system is working correctly and this email was sent out by accident.

Our system was not compromised in any way, intruders did not get access to any information, it was just a test email that was used by developers that was sent out by accident.

We apologize if this email caused you any concern.