The performance of the Canucks’ second line in last night’s 4-1 victory over the St. Louis Blues should be an encouraging sign to all Canucks fans. The trio of Nick Bonino, Alex Burrows, and Chris Higgins combined for 6 points (2 points each) with Bonino’s third-period goal holding up as the game-winner.

Their effort was a stark contrast to Tuesday’s night 6-3 loss in Dallas, in which all three players finished with a dismal minus 3. In that game they looked slow, they were beaten to loose pucks and caught out of defensive position a few times.

While it would be easy to say that the Canucks will go only as far as the Sedins and Radim Vrbata will take them, I would argue that just as important to the team’s success will be the play of the second line. The Canucks-Blues game was a prime example of this. The first line played quite well, but did not register any even-strength points. Thus, it was crucial that other Canucks players filled the scoring void.

The spot on left wing now occupied by Chris Higgins was originally thought to be Zack Kassian’s to lose.  And lose it he did with an inconsistent and uninspired pre-season.  Thus, when the regular season started, Kassian found himself on the third line to the dismay of his many fans (like Omar).

Kass made a pass that led to a rush the other way. Cue everyone talking about him being inconsistent until next #Canucks game…

There are many reasons why a strong second line is crucial to this team’s success (as it would be to any team). On nights where the Sedins and Vrbata aren’t feeling it, whether due to fatigue, injury, or facing the opposing team’s top checking forwards and D-pair, the second line must relieve some of the scoring pressure. As well, the second line is basically the core of the second power play unit – and the power play as a whole needs to be much better this year.

The line has good elements to it. All three players hard workers.  There is scoring potential:  Bonino is coming off a 22-goal campaign, Chris Higgins has had three 20-goal campaigns (albeit between 2005 and 2008), and Alex Burrows has four 25-goal seasons to his credit. Bonino has good hands and is a good passer. Higgins has tenacious board play and thus recovers a lot of loose pucks and forces many turnovers. Alex Burrows is a very intelligent player and plays his best when being an aggressor and agitator. 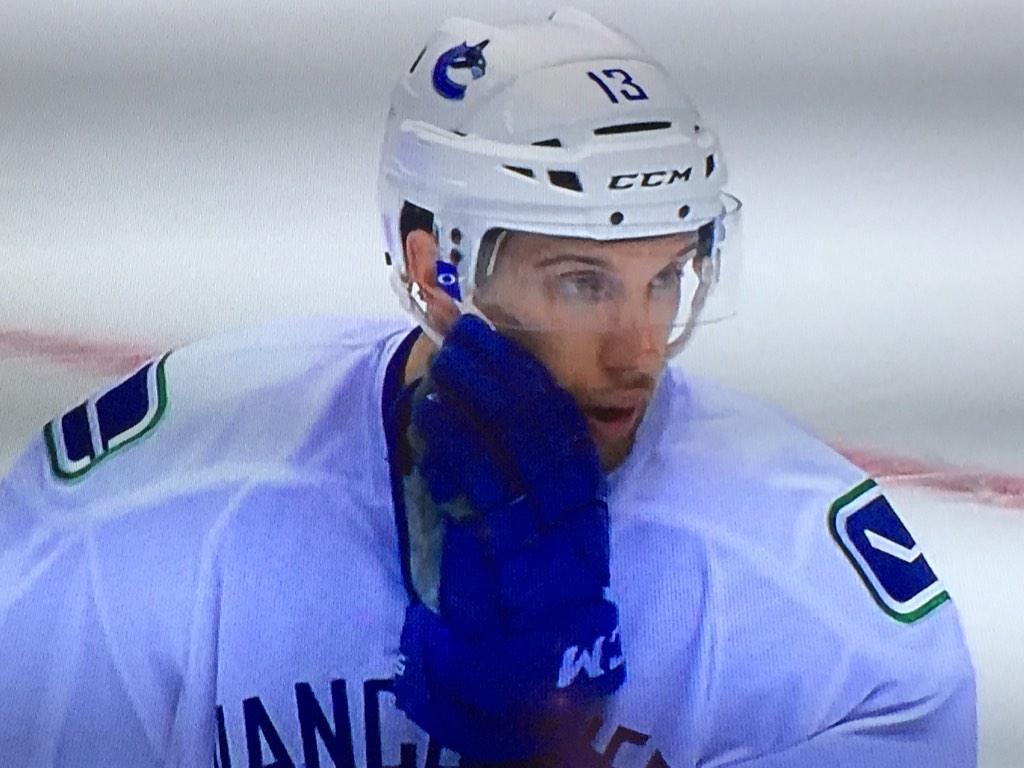 Bonino before his face off against Steve Ott on Thursday night: “You’ve got my back just in case he tries to lick me, right?”

Of course secondary scoring needs to come from other players too – not just those on the second line. Will the third and fourth liners chip in with some timely goals? It’s always a bonus when a so-called third line – often charged with checking the opposing team’s top line – provides some offense.  Ditto for the fourth line which is often reserved for bangers, crashers, and defensively-sound players. And what about the defencemen? Can the Canucks count on 40+ goals from their blue-liners like they have in the past?

When you take a look at some numbers from the record-breaking 2010-2011 season, you see how important secondary scoring is. Aside from the combined 86 goals and 246 points from the Sedins and Burrows, you had Ryan Kesler (41-32-73), Mikael Samuelsson (18-32-50), and Mason Raymond (26-22-48) making major contributions to the offense. The combined total from these three now-departed players was 85 goals and 86 assists for 171 points. That team also had 14 goals from third-liner Raffi Torres and six defencemen that could all contribute offensively.

Obviously that rendition of the Canucks was very strong, hence the Presidents Trophy. But there’s no denying that secondary scoring was instrumental to the team’s success.

It will be interesting to see what happens over the next few weeks. Will Zack Kassian get a chance to skate on the second line? What about Linden Vey? And will Bo Horvat’s inevitable insertion to the line-up have a trickle-down effect?

We all know it’s going to be a dog fight for the Canucks to even secure a wildcard spot for the post-season. The Canucks will only make it if their secondary scoring becomes a primary weapon.