Blueprint is excited to announce the full line-up and details around their 4th annual SEASONS Festival.

This year’s much anticipated music festival will span five days over the Easter long weekend, from Wednesday, April 16 until Sunday, April 20, with shows booked at Blueprint’s Celebrities, Venue and Shine nightclubs, in addition to a massive all-ages main event – produced in partnership with Live Nation – featuring Zedd, Nervo, Flume and Duke Dumont at the Pacific Coliseum on Saturday, April 19.

Since inception, Blueprint has remained dedicated to their passion for creating exceptional experiences by bringing state of the art visual and sound production, A-list artists and unique, conceptual events to a loyal and constantly expanding fan base. SEASONS 2014 won’t fail to impress, inviting music revelers from across the Pacific Northwest to enjoy numerous events over the five days, including sensational performances by Seven Lions, Trinidad James, Been Trill, Audien, Tommy Trash, Tiga, Green Velvet, Project 46 and more, who will be pumping up the city.

For Blueprint, the 4th annual SEASONS Festival represents an exciting diversion for the entertainment mammoth, from hosting single day electronic music events to its third consecutive year executing a multi-day festival encompassing multiple genres of music and a variety of artists.

“It’s amazing to me to see that just four years ago we started with just one show – and now SEASONS has grown into this massive city-wide party,” Alvaro Prol explained, Co-Founder and talent buyer for Blueprint. “We saw the potential to make SEASONS into something bigger, so each year that we’ve brought SEASONS back we’ve made it a priority to grow it – whether it’s by adding additional days or more talent, or expanding the genres of music offered, we’ve committed to that.”

“We’re confident in saying that this year’s line up is our most exciting and extensive yet – offering up a little something for everyone,” Prol added. “This is something we couldn’t have done without the undying support from our diverse and growing following.”

Beginning in 2011 as a single day show at the Vancouver Convention Centre, Blueprint has since grown SEASONS to span multiple days and venues. The growth has allowed the music elite to revel in performances by a variety of the most renowned and up and coming artists. In 2013, the SEASONS Festival main event sold out – 6,500 revelers celebrated at Pacific Coliseum for Calvin Harris and Nicky Romero. With over 4,000 attendees to the multiple club events, the total guests for SEASONS 2013 was over 10,000.

Tickets for the SEASONS Festival will be available for purchase on February 14 at 11 a.m., and further information on the events can be found at www.seasonsfestival.com. To stay in the know on news, announcements and updates, join the conversation on social media by following the #SEASONSfest2014 hashtag. 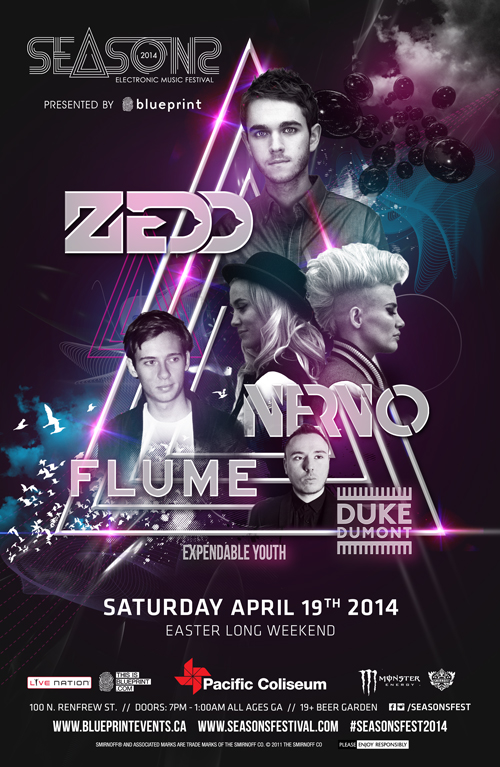 Where: Nightclubs (Celebrities, Venue and Shine) and PNE Coliseum