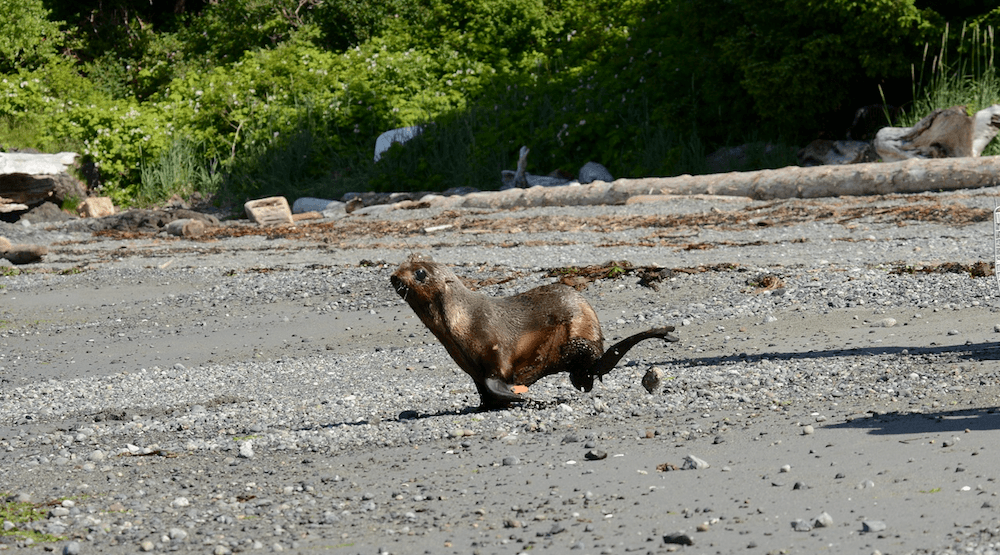 Calling the event a “milestone,” the Vancouver Aquarium Marine Mammal Rescue Centre released a rehabilitated northern fur seal named Flores for the first time in its history this week, and then admitted another uncommon patient: a Steller sea lion pup.

“It’s impossible to say at any given time what types of animals may need our help,” said Lindsaye Akhurst, manager of the Rescue Centre.

“Most of our patients through the summer rescue season are harbour seal pups, but this year we’re off to an interesting start, rehabilitating several novel species that we don’t see as often in our rescue centre.”

Flores was found on the west coast of Vancouver Island in January,  emaciated and suffering from an eye injury.

After almost five months of treatment and rehabilitation, Flores boarded a plane with a team from the Rescue Centre flew to Ucluelet, where he was released on Little Beach.

“From the day of his rescue Flores was feisty, and he remained that way right up to his release, which is great,” said Akhurst.

One released, one brought in

Named Bella Bella, after the town closest to the site of her rescue from remote McInnes Island off BC’s central coast, rescuers said the tiny pup was lethargic, minimally responsive and without her mom when she was found by the lighthouse keeper on the island.

She was flown by helicopter from the Island’s Coast Guard station to Bella Bella, then to Vancouver by Pacific Coastal Airlines.

“She was in extremely poor condition when she arrived; we were worried about her,” said Dr. Barbara Linnehan, veterinary fellow at the Vancouver Aquarium, who estimates the pup to be about a week old.

“Since being admitted, she’s been under intensive observation, treated with intravenous and subcutaneous fluids, gastric protectants and antibiotics, and fed specially-designed formula with both a tube and a bottle. She’s much brighter and more alert now, but she has a long road ahead.”

The Steller sea lion is the biggest of all sea lion species, found in Canada along BC’s rocky coast. It is listed as a Species of Special Concern under the Species at Risk Act.