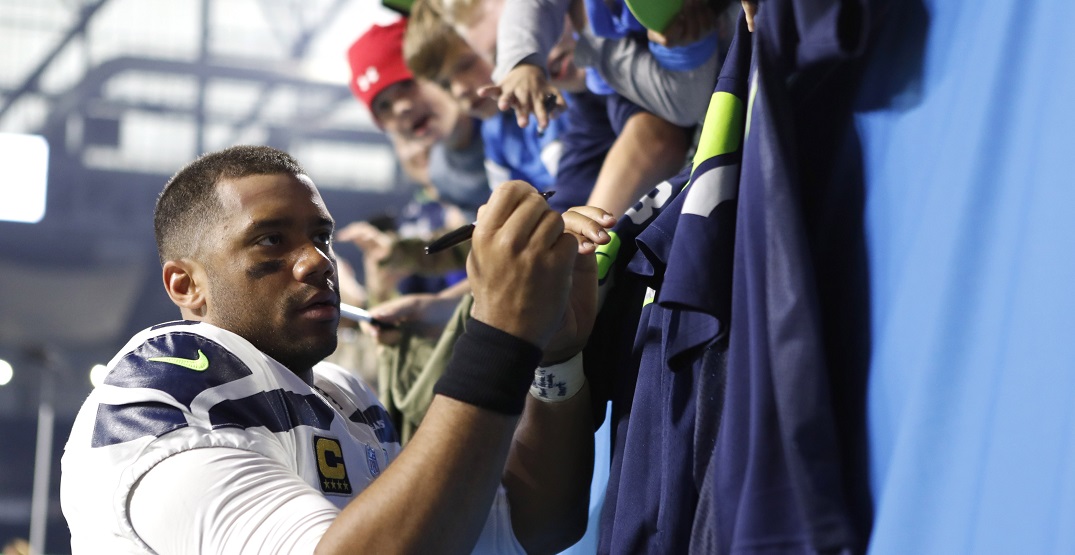 After months of speculation about his future, the Russell Wilson trade finally happened.

Wilson was moved Tuesday in a blockbuster deal that saw him sent from the Seattle Seahawks to the Denver Broncos in a trade for QB Drew Lock, TE Noah Fant, DL Shelby Harris, two first-round picks, two second-round picks, and a fifth-round pick.

Wilson was originally a 2012 third-round pick who ended up leading the team to two Super Bowl appearances, winning in 2014. Wilson has played all of his 10 seasons for the Seahawks, having thrown for 37,059 yards and 292 touchdowns in the process.

Seahawks fans had plenty to say about the trade: some felt it was only a matter of time, while others were frustrated at the front office for letting the team’s franchise player go. Wilson had a no-trade clause, meaning he would’ve had to approve the trade.

Others simply thanked Wilson for his time with the Seahawks.

Here’s some of the reaction from Seahawks fans around Twitter:

Thank you for the Memories Russ https://t.co/cUgS1U7Xza

This city will love him forever. Thank you Russ it's been a movie interesting till the end. 💙💚12

I've contemplated this day for years and it's as bizarre as I expected. Russ as a Seahawk felt permanent. But, alas

Russell Wilson's last ever "Go Hawks" as a Seahawk. This hurts so much man pic.twitter.com/S5zojvCqzm

Doesn’t look right but wish him the best. Dudes a great player and better person

You are, were and always will be the reason I fell in love with football, the city of Seattle and the Seahawks.

I don't know how to process the idea of never seeing you in the field wearing #3 again.

All the luck in the world to you, thanks and I love you! @DangeRussWilson pic.twitter.com/HpNiWROccg

Love Russell Wilson. He turned the #Seahawks around like no one ever has. But if you have to trade him, now is as good a time as ever. His value is still high, the Seahawks need to rebuild, and the NFC West is going to be stacked for at least a few more years. #ThankYouRuss

The Seahawks themselves posted a video of Tom Hanks in the 2000 film Cast Away clamouring for Wilson, his pal made out of a volleyball.

Unsurprisingly, not everyone was thrilled with the video.

you think this is a joke

I’m asking too. Really you traded @DangeRussWilson – have you all LOST your MF MINDS!!!!! I’m not a happy fan right now. Cause I’m a super #DangeRuss fan! 😳😳😳 https://t.co/TAGlj77nDQ

The NFL schedule isn’t out yet, but the Broncos are slated to visit the Seattle Seahawks at some point in 2022. Hard to predict how the game will go, but a standing ovation (or several) will be expected in Wilson’s return.