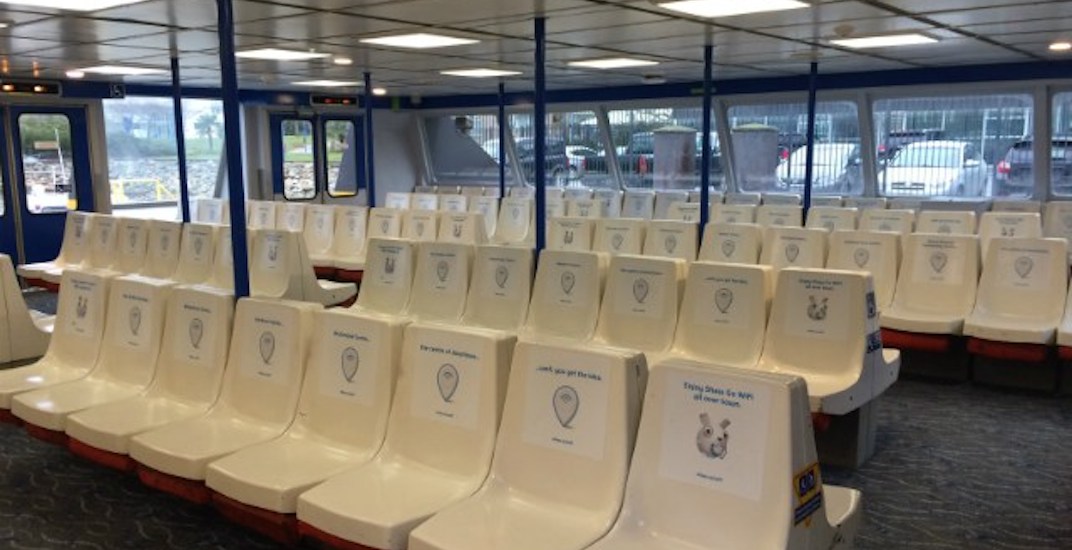 The interior of the Burrard Beaver ferry. (TransLink)

There was a disruption to SeaBus service during today’s morning peak period due to a mechanical failure with the fleet’s oldest operating vessel.

Smoke filled the passenger cabin of the Burrard Beaver just after 7:30 am just as it was arriving into the terminal at North Vancouver.

TransLink spokesperson Jill Drews told Daily Hive the vessel was immediately pulled from service, and the crew switched over to using a backup vessel.

A grease leak into a coupling has been determined as the cause of the smoke. There were no reported injuries.

It resulted in some delays as the 7:47 am and 8:02 am sailings were cancelled. Full service resumed at approximately 8:15 am.

A full inspection will be conducted on the vessel before it is returned to service.

The Burrard Beaver is one of the two 1976-built twin SeaBus vessels, and it recently received modest upgrades so that it can be used as a spare. This included a new paint job, new carpets, new lighting, repairs to the hull, and new panels for the bridge.

SeaBus is currently using two newer vessels, including a vessel that replaced the Burrard Otter, and a fourth vessel is scheduled to arrive in 2019 at a cost of $34 million. This will allow TransLink to operate the ferry service at frequencies as high as every 10 minutes.

Mechanical failures are rare on SeaBus, which is considered TransLink’s most reliable service based on performance data.