As job action reaches a fourth consecutive week, TransLink has announced a pair of afternoon SeaBus cancellations for Monday, November 25, 2019.

Due to job action, SeaBus will have 2 sailing cancellations today. Passengers may also experience frequency reduction on some bus routes. Please sign-up for Transit Alerts at https://t.co/8mM2JFOsQC ^sdp

The cancelled sailings, which take place in the afternoon, are as follows: 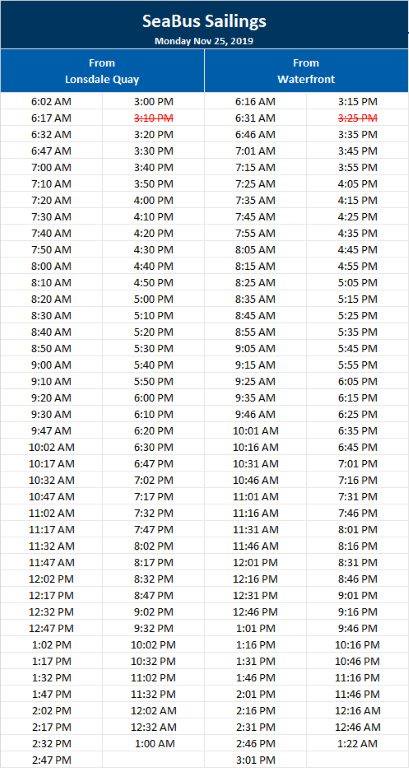 The cancellations come after the workers’ union announced last week that a “complete system shutdown” would be coming to Metro Vancouver’s transit system.

Should the shutdown takes place, there will be no bus service this Wednesday, Thursday, or Friday. Rather, Unifor Local 111 and 2200 employees will begin picketing. A public rally is also scheduled at TransLink headquarters on Thursday.

“It has become clear to us that TransLink has no intention of settling a fair contract for its workers,” said Gavin McGarrigle, Western Regional Director of Unifor at a press conference last week. “It is clear that they would rather pretend that there is no problem and deal with service disruptions by changing buses, rather than changing their bargaining approach.”

McGarrigle notes, however, that it’s not too late to change course and avoid the shutdown.

He implores TransLink to “come back to the bargaining table… address the outstanding issues, and bargain a fair agreement with your workers to avoid an escalation.”

SkyTrain, Canada Line, and West Coast Express employees operate under a different union and are expected to be operating normally during the shutdown.

Last Tuesday, Cupe 7000, the union consisting of approximately 900 SkyTrain employees voted overwhelmingly in favour of strike action. Job action would only be taken, however, if an agreement isn’t reached with the BC Rapid Transit Company (BCRTC). The two parties are scheduled to resume bargaining talks and notice must be given before beginning job action.