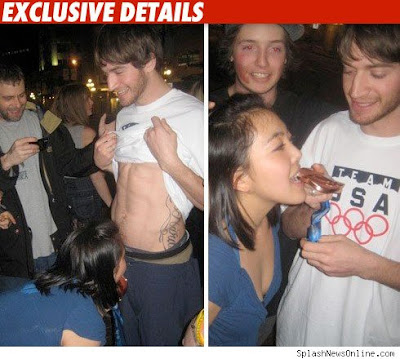 United States bronze medalist snowboarder Scotty Lago is in hot water with the United States Olympic Committee (USOC) for the above photo. He was asked by the USOC to leave the village and he has complied with their request. Really? The photo is hardly scandalous, what do people think goes on at the athletes village anyway. Lets just say he did better than the Blackhawks when they came to town.
It’s a known fact, men compete to win, and then look to capitalize on their fame to score chicks, the more the better. I’m sure women do the same expect they look to score with men (or in my head with other ladies). In fact the you might as well call the Olympic Village one big porking hut because that’s what going on after the competition.

I’m sure the USOC had to do this for mere optics but in the back room the old boys that run the USOC are probably have a laugh and high fiving Scotty Lago right about now.