Go Karting is like a gateway drug to race car driving. At least that was the case for 20-year-old Scott Hargrove of Surrey who started driving the zippy little cars at 13 years old.

Hargrove is considered a late bloomer in his industry, as most who make it to the professional leagues are karting by the age of seven, but has quickly proved himself a force on the track.

Twelve years after putting his hands on a steering wheel for the first time, Hargrove will be driving the Porsche GT3 Cup race car for the upcoming Toronto Indy – an elite vehicle that reaches speeds well over 300 kilometres per hour in a straight line.

Even at top speeds, race cars are safer than driving street cars because they are built with a roll cage.

“Crashes look bad because the car sheds parts, which they do to disperse energy,” he says. “You’re in a safety cell, an area of the car that’s not going to break, but every other part of the car is meant to break off.”

One of the biggest challenges for race car drivers is being able to maintain mental concentration over the course of the race.

“It’s hard because the environment in the car is extremely hot, the cars have no windows, it’s sealed off so there is no air going through the car, and there is no insulation so all the heat comes into the car,” says Hargrove. “It can get up to 140 degrees inside the cockpit and you’re wearing a racing suit that’s three layers thick plus it’s fire proof and you’re wearing a helmet.” 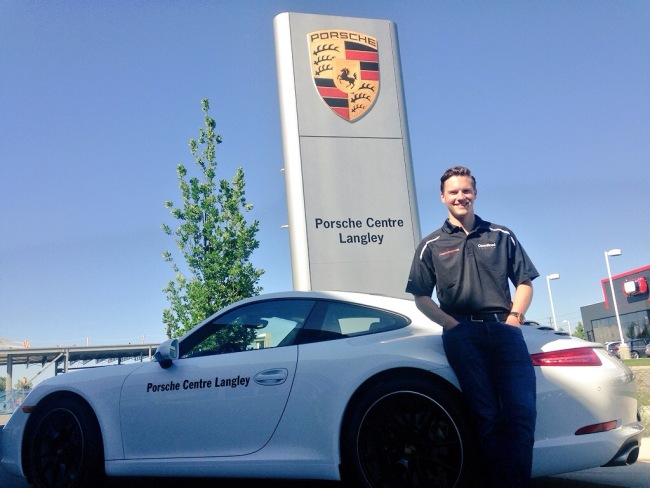 Hargrove races with OpenRoad Racing, and OpenRoad Porsche owns the Porsche GT3 Cup Car that Hargrove will be driving at the 28th annual Honda Toronto Indy on June 12 to 14, with a track-testing day on June 11.

We had the chance to get some racing tips from Hargrove:

Look down the road

Search for any visual cues so you can gage the position of the car and make adjustments on your driving.

Keep your hands connected to your feet

There is a certain amount of grip that a car has. If you’re breaking and you’re at the maximum amount of grip available, you cant do anything else with the car. If your breaking and you need to turn, you need to get off the break so that your able to turn. That means your hands are always connected to your feet. It’s about being extremely smooth with your inputs, almost like you have strings between your hands and your feet.

Predict the next move

When your racing and your following somebody, you’re always trying to predict what they’re going to do. Every driver has a style, so you’ll be watching a driver and can gage where you’re a bit better than him. That way, you can predict where you’re going to make a pass and how you’re going to do it. It’s all about being observant of the people around you and making decisions off what they do. It’s a big strategy game.