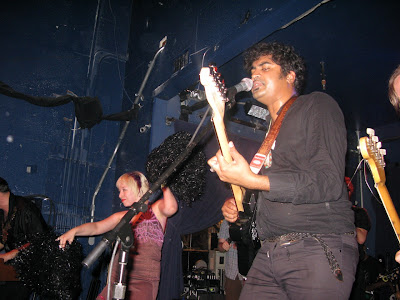 Alright, I won’t lie to you. When I first heard rumblings on message boards and saw show posters about KING KHAN and BBQ SHOW I was scared, frightened and really just not interested in what it may be. A weird costume themed BBQ? Some kind of anonymous sex party ala It’s Always Sunny? I really didn’t know…

Now that I do know what KING KHAN and BBQ SHOW is all about and I’m still scared, still frightened and still think it’s a bit of a crazy sex party, except now I am also VERY interested and excited to see what this band has to offer. Labeled as “du-wop punk rock” KING KHAN and BBQ SHOW come out of Montreal and Berlin , Khan and BBQ both who were in a punk band together called the “Spaceshits” disbanded in 1999 and went their separate ways. Four years later they would join forces again as some sick fate brought them together to create KING KHAN and BBQ SHOW who now have released 3 studio albums and collaborated with the likes of the Black Lips and future plans for KHAN to do an album with Wu-Tang Clan member GZA. They blend garage rock with catchy choruses and lyrics that could have only been thought up while on some really good magical fungi and are bringing the “show” to the Biltmore in Vancouver this Thursday March 25th.

Their live show has apparently broken out in to orgies on stage and left people bleeding and screaming for more while KING KHAN and BBQ SHOW rock about on-stage in any number of gets ups, whether it be wigs while wearing cocktail dresses, German war helmets or just no clothes at all, the live show is one hell of an experience. Make sure to check back with Vancity Buzz for a complete recap of the show. If you’d personally like to attend the chaos, believe it or not this show is FREE just visit the Biltmore website and check out the schedule HERE to view how to get an RSVP.

And to get hyped for the show check out the title track from their latest album “Invisible Girl” which is receiving rave reviews from Spin, Paste and Pitchfork.

Who: KING KHAN and BBQ SHOW with special guests White Lung and Twin Crystals
What: complete and utter chaos
When: March 25th doors @ 9pm
Where: Biltmore Cabaret (take the 19, it’s always a fun trip)
Why: see videos above