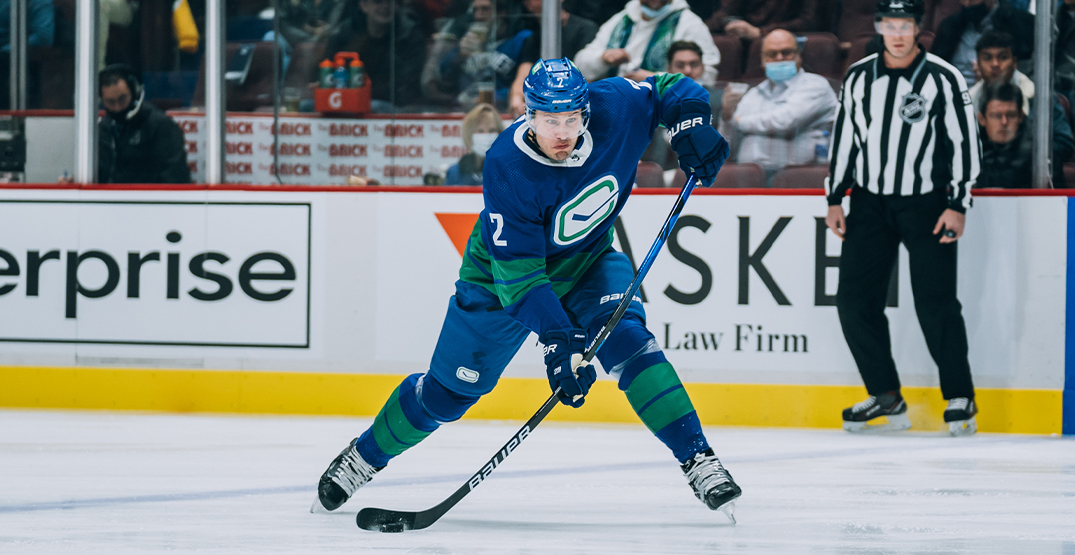 COVID-19 has hit the Vancouver Canucks, but in a much different way from last season.

Eight days after testing positive for the virus, Canucks defenceman Luke Schenn was back on the ice at practice this morning. He’s the first of six players that tested positive to come off the COVID list, in accordance with NHL protocol, after he tested negative in recent days.

“I feel good,” Schenn told reporters after practice. “I was sick for three or four days. Just general flu or cold symptoms that I guess you’d [typically] have in the wintertime. Some body aches and throat [aches]… Other than that, I recovered fairly quickly.”

🗣 Luke Schenn on his return to practice pic.twitter.com/VqM5BCTDyh

Schenn’s experience was much different than what many of his teammates went through last spring, when the P.1 (Gamma) variant ripped through the Canucks dressing room. A number of players, coaches, and staff suffered severe conditions, as none of them had the opportunity to be vaccinated at that time.

No player appears to have suffered as much as Brandon Sutter, who has long-haul symptoms. Not only has he not been allowed to play games yet this season, he isn’t even able to work out.

Brandon’s father Brent told Sportsnet’s Eric Francis that this summer his son’s “heart was racing,” and that he felt dizzy and had a hard time breathing.

“A few things started creeping up in July, and then in August when he started cranking it up, it got so bad he couldn’t really walk around the block,” said Brent.

That hasn’t been the case for Schenn, who confirmed that he had the Omicron strain of the virus.

It appears that Schenn’s experience has been typical for vaccinated NHL players.

“Quite frankly, I haven’t heard too much about them being ill,” said head coach Bruce Boudreau of the players that tested positive. “I haven’t heard of any guys being really really sick.”

Schenn said he tried to keep fit with his Peloton at home, in anticipation of returning for games this week — though those games were postponed

The Canucks have had all their games postponed until after Christmas, but unlike a number of other teams, they haven’t been forced to shut down operations. That’s going to allow Boudreau to implement a number of new systems that he simply didn’t have time to do during a busy playing schedule.

“If we’re practicing and others teams are not because of COVID, we’d certainly like to take advantage of it,” said Boudreau, who admitted that his team was “a little sloppy” today.

The Canucks are planning to practice tomorrow, and the team is preparing for their next scheduled game at home to the Seattle Kraken on December 27.