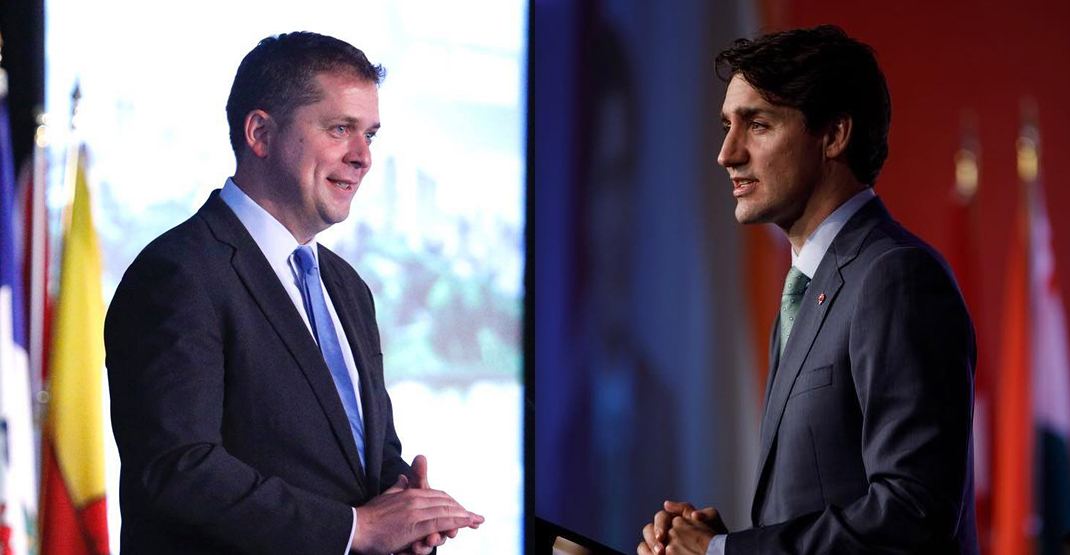 Conservative Leader Andrew Scheer’s own past comments returned to the forefront Thursday as his main opponent for the country’s top political office was found to have darkened his skin as part of costume.

Liberal Leader Justin Trudeau asked the country to forgive him Wednesday after two images of him wearing brownface or blackface, one from high school and one when he was a teacher at a posh Vancouver private school, came out through various media outlets. A
third video from the early 1990s then emerged Thursday morning.

At a campaign stop in Saint-Hyacinthe, Que., Thursday morning, Scheer’s attempt to proceed with the campaign as normal and announce a tax credit for seniors was entirely spun off the rails by the emerging Liberal crisis.

Scheer said the video was given to Global News by his campaign team, but said he himself had only seen it for the first time Thursday morning.

Scheer himself continues to face questions about why he has not apologized or expressed any regret that during the debate on same sex marriage in Parliament in 2005, he compared the idea of two people of the same sex getting married to considering the tail of a
dog as one of the dog’s legs.

When the Liberals pushed out the speech via a tweet from cabinet minister Ralph Goodale in August, Scheer did not apologize, rather he said only that the matter was legally closed in Canada and a Conservative government under his watch would not bring it back up.

As a practising Catholic, Scheer has not clarified if his own views on same-sex marriage have changed or if he still considers allowing people of the same sex to marry to be wrong.

Scheer told reporters and a handful of local supporters outside a bakery that he had never dressed in a way that stereotyped or offended anyone’s race or culture.

But he also said he is not perfect.

“I’ve never claimed to have handled every situation properly and obviously I continue to reflect on that and try to improve myself as a human being,” he said. “In conducting myself do I regret anything in my life? Not a specific instance. I’m not pretending to be a perfect human being in every way, but nothing like this at all. No, no, nothing like that at all, nothing that would rise to this level.”

When asked if his comments on same-sex marriage are among things he regrets, he did not directly answer the question.

“I have addressed the speech I gave in 2005,” he said. “What we’re talking about today is Justin Trudeau’s behaviours and his inability to be truthful and honest about it, and we saw that last night when he was asked directly if there were other examples out there of this and he failed to be honest.”

The first picture to emerge Wednesday depicted Trudeau in 2001, when he was a Vancouver private school teacher, at an “Arabian Nights”-themed event, clad in an elaborate turban and robe, his face, hands and neck covered in dark makeup.

When asked whether it was the only instance of its kind, Trudeau said that during a high school talent show, he wore makeup while performing a version of Harry Belafonte’s “Banana Boat Song (Day-O).”

Scheer said people running for prime minister must be held to a higher standard.

After the Liberals continually issued tweets with evidence of Conservative candidates saying or posting racist, homophobic or other offensive things, Scheer said last weekend that as long as a candidate apologizes and expresses a commitment to treat all people with respect, he would accept their apology.

He said of Trudeau that he can’t accept his apology because he lied about how many times it had happened.

Scheer is campaigning in three Quebec ridings _ two held by the NDP and one by the Liberals _ where his party finished a distant fourth in 2015. In at least two of them, the local prominence of the Conservative candidates is giving the party some hope to be able to
take the seats.

In a 2018 byelection, the Conservatives nabbed a seat in Quebec’s Saguenay region north of Quebec City, which they hadn’t won since 1997.

Scheer’s day began with an unexpected delay when the floor of the bakery hosting Scheer’s announcement began to fall, forcing the event outside.