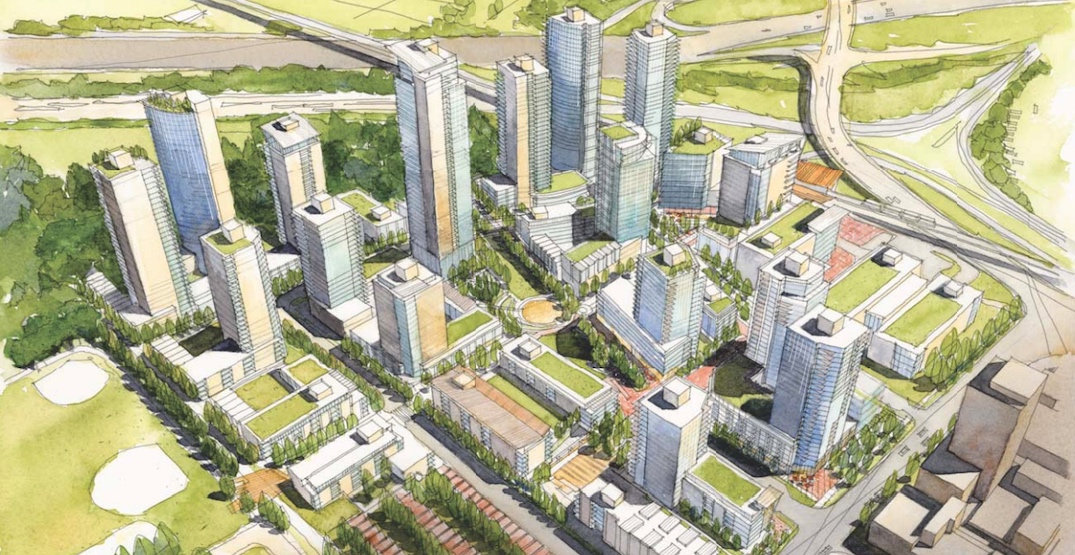 Proponents of a major mixed-use, transit-oriented development immediately west of SkyTrain’s Braid Station in New Westminster have returned to the municipal government with a significantly larger proposal that includes a significant additional infusion of rental housing.

The southernmost parcel of the property is a satellite parking lot for Royal Columbian Hospital staff, and to the north the site is framed by the Central Valley Greenway and the Brunette River. There is also direct access to the Trans Canada Highway via the Brunette Avenue interchange. 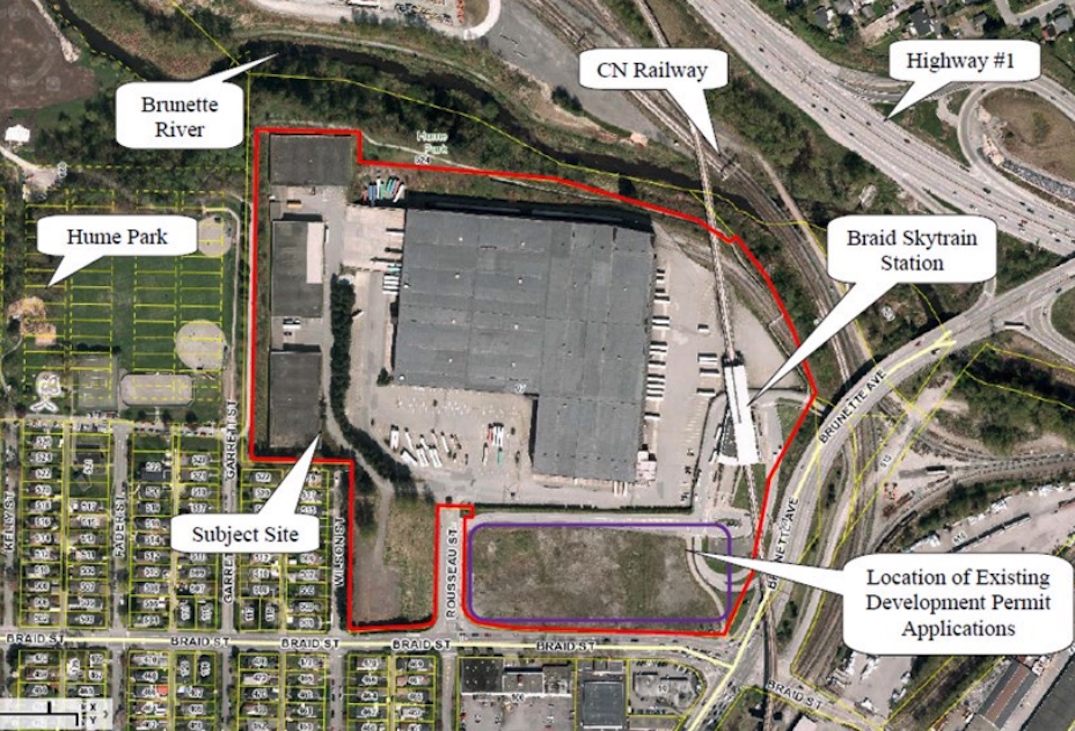 Planning for the redevelopment began in 2011, when it was managed by commercial developer Bentall Kennedy on behalf of the property’s owner, the British Columbia Investment Management Corporation (BCIMC).

But QuadReal Properties took over management of the project in 2017, when it took over Bentall Kennedy’s BCIMC portfolio and submitted the first iteration of the application. The architectural firm for the project is Musson Cattell Mackey Partnership. 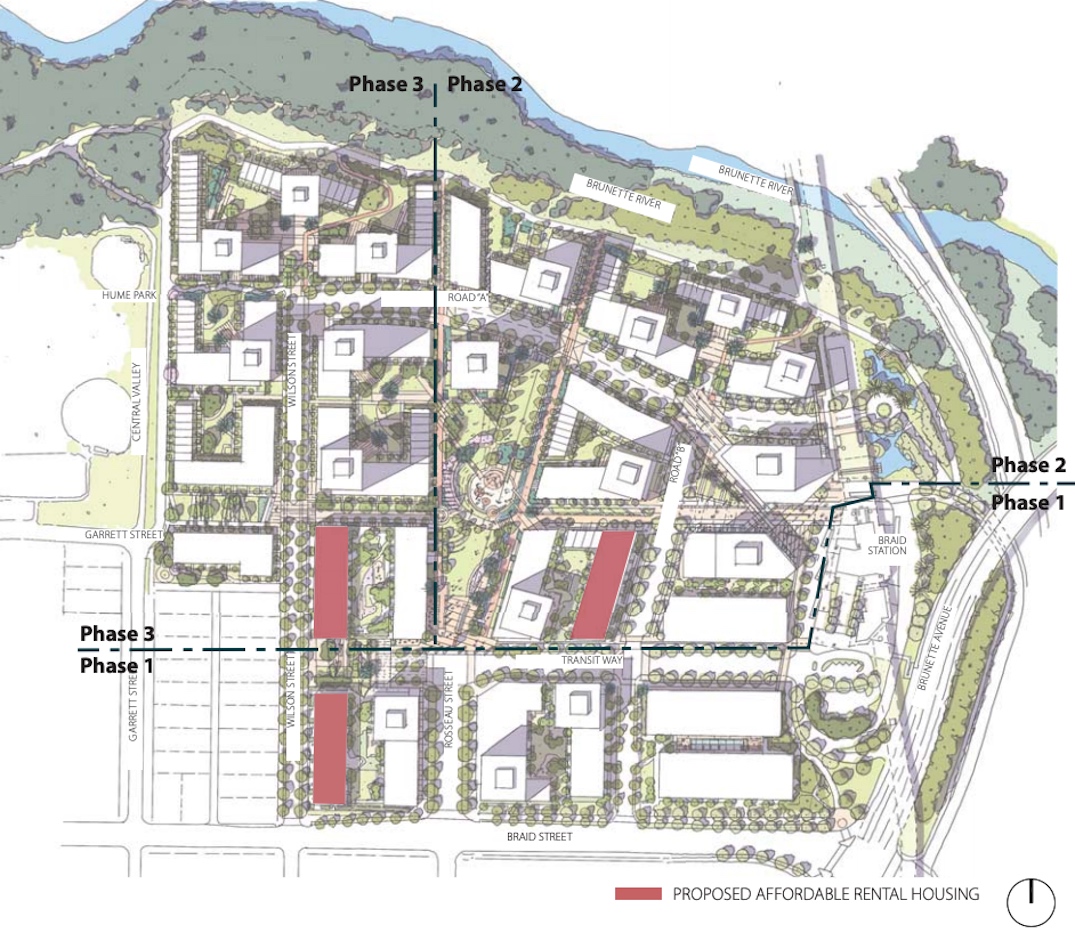 Changes to the proposal are consistent with the city’s new Inclusionary Housing Policy, which focuses on catalyzing non-market rental homes.

The office component of the project is significant for New Westminster, given that its scale would increase the city’s office supply by between 37.5% and 75%, depending on the option chosen.

The project’s residential uses are largely located on the northwest half of the site, while retail and office space are oriented on the southeast half, closest to the SkyTrain station and bus exchange. The tallest buildings are generally located on the northern half and core of the property, as well as next to the transit hub.

Retail and restaurant uses will line the street along the northern foot of Rosseau Street on the property, and the “Transit Way” leading to the bus exchange.

A 35,000-sq-ft community centre with a childcare facility is located next to a 2.4-acre central public park. 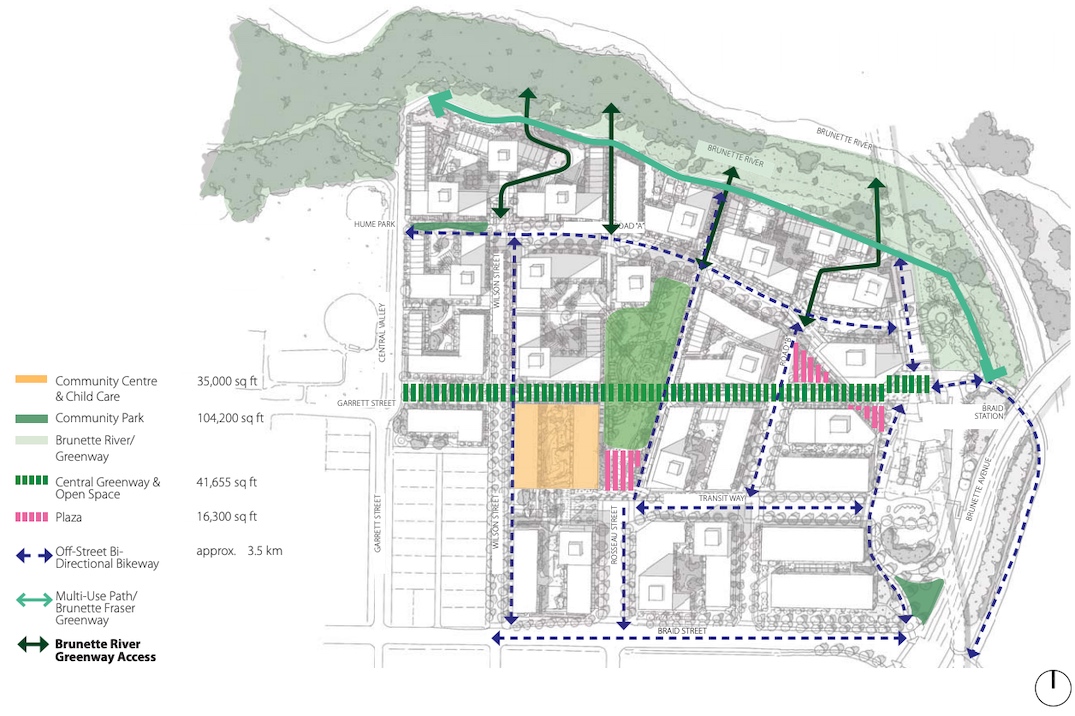 A pair of plazas are planned, and the Central Greenway will be rerouted through a new greenway and open space going through the core of the site.

The entire project calls for eight acres of green and open spaces, parks, and plazas, including dedicating 3.5 acres for riparian area improvements, particularly along the property’s northern edge with the river.

With city council’s latest decision, public consultation will be held from Spring to Fall 2020, with an aim to finalize the master plan by the end of this year.

If the master plan is approved, the entire redevelopment will be built in three phases, with each phase comprised of 85,000 sq. ft. of affordable rental housing. Construction on the affordable housing component of the first phase could begin in 2021, providing 110 units within a six-storey building.

The first phase will develop the southernmost parcel of the site. Amazon’s 2012-opened facility on the site will not be affected until construction of the second phase begins. Two other Amazon fulfillment centres serving Metro Vancouver are located in Delta.

QuadReal Properties is also behind the redevelopments of the old Canada Post building and Oakridge Centre in Vancouver. 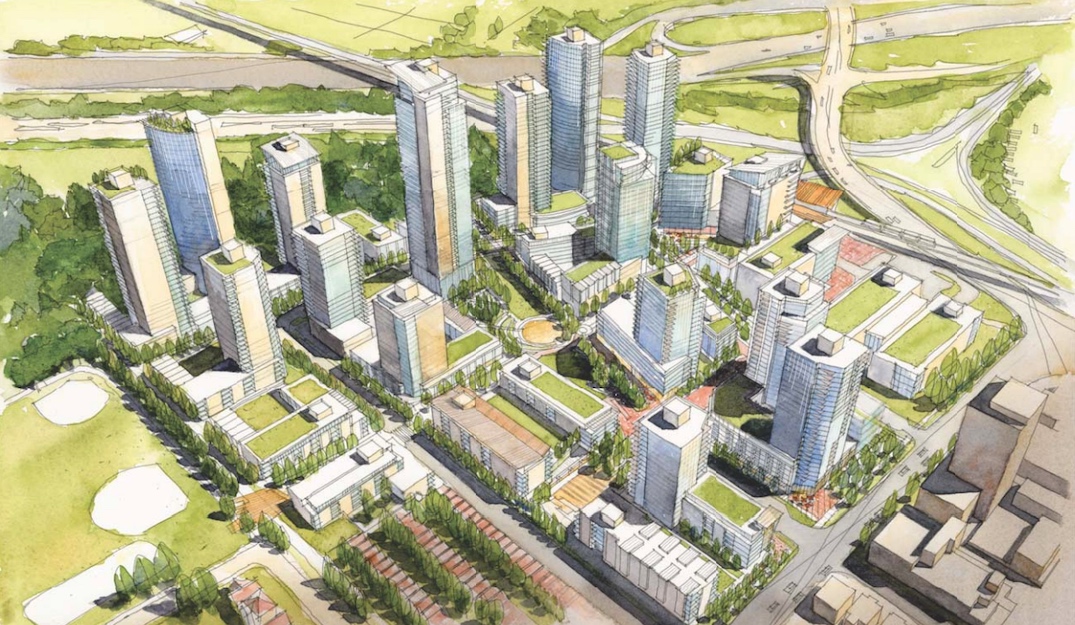