There’s an incredible change happening in Vancouver’s Chinatown that is breathing new life into an old community, bringing with it a fresh breath of vitality and forward-thinking that takes into account the legacy of the past. Few new developments in Chinatown exemplify this meld of new-meets-old than Sai Woo, a new restaurant housed in and named for the chop suey spot that was previously there.

Restaurateur Salli Pateman (Section 3) says she had been scouring the city for a suitable new place for her next endeavour for some time, but it took a few visits to 158 East Pender for her to realize she’d found the right location. Pateman describes a crumbling structure in dire need of major work, and with potential that revealed itself as each layer was peeled away in the renovation process itself.

Inside Sai Woo sunlight filters down from skylights that had been long covered over. The exposed brick walls are original, but had been hidden for decades under what Pateman says was a remarkable number of different layers of wall. But the moment that sealed the deal for Pateman was when she found a photograph of a group of men outside the Sai Woo Chop Suey restaurant. She had the name, she had a purpose. (The photo is used on Sai Woo’s website and business cards, too.) 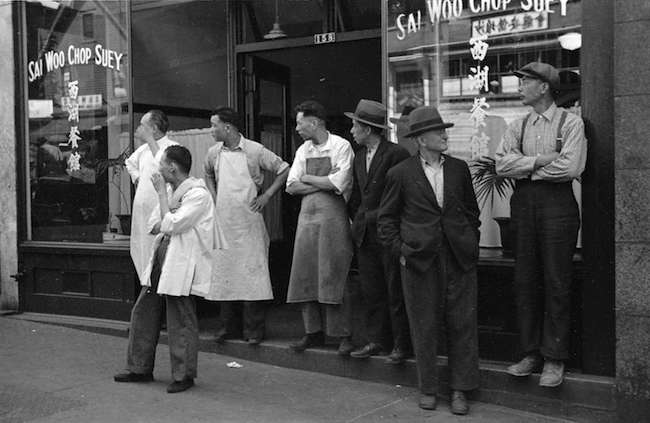 In a similar stroke of good fortune, Pateman acknowledges, she came to know chef Douglas Chang, formerly of Vancouver’s West and Bambudda, a Toronto native who trained in New York City under restaurant icon Danny Meyer at his Eleven Madison Park. The two instantly realized they shared a vision for what was to become Sai Woo, and a place where new flavours could shine in a modern setting that pays tribute to its own history.

The menu at Sai Woo is small and tight; Chang says this is to preserve the quality of each dish. Designed so that adventurous eaters (bold spices, lesser-used cuts of meat) can dine happily alongside those with a hunger for the more familiar, Chang has come up with a sophisticated meld of Asian and European offerings that reflect his own upbringing and food philosophies. 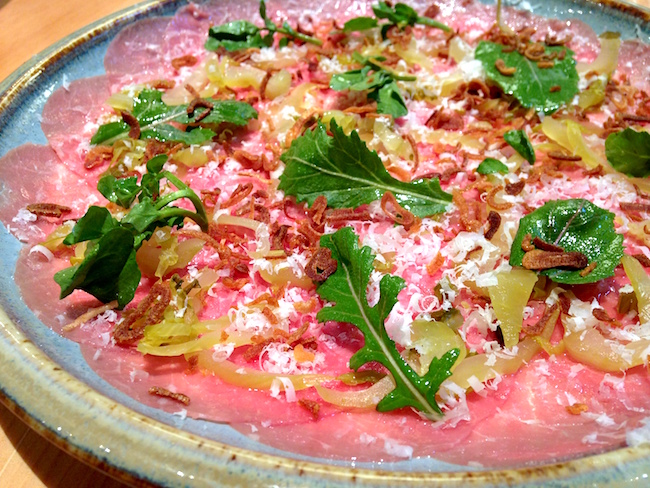 A dish like the Beef Salad–a carpaccio of nearly tissue-thin beef slices dotted with fried shallots, pickled mustard greens, and Parmesano-Reggiano–is Italian upended, thanks to the sour tang of the greens, the nutty salinity of the cheese, and the hearty, earthy crunch of the shallots.

Also among the lighter fare is a gorgeous Tuna Salad that includes two versions of the fish; tea smoked and sliced into cool, quivering, lustrous squares and confit then flaked into rich shards. The greens are dressed in miso, and the dish adorned with a soft-boiled “tea egg” steeped in salty soy. It is precisely the kind of egg you will immediately want on all salads you encounter from that moment on. 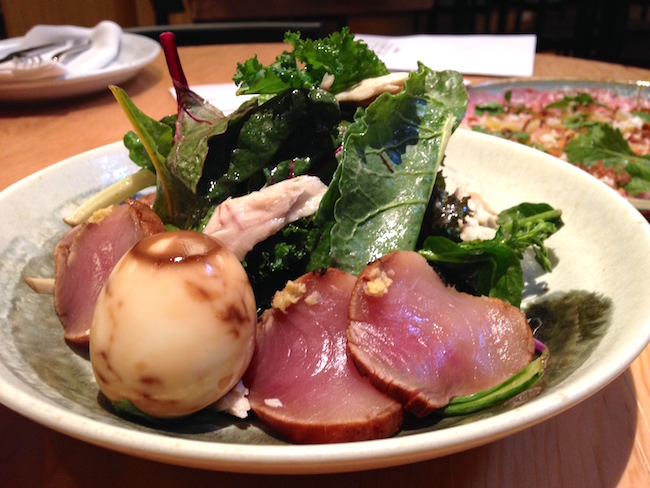 Many of Chang’s dishes also include a note of brightness courtesy the fresh, herbaceous punctuations of ingredients borrowed from Vietnamese and Thai cuisine. The “Cheek to Cheek” (Guanciale, Pea Agnolotti, and Herb Salad in Jinhua Ham Broth) illustrates the unity Chang found in global cuisine. Chang describes finding dishes in both Italy and China that used the same core ingredients: Air-cured ham and peas. Rather than limit himself to each dish’s iteration, Chang brought them together in a new way.

“The more I cook and eat and travel I realize there are more similarities than differences in what we eat,” explains Chang.

And, still, guests at Sai Woo can order up a simple serving of Gai Lan–Chinese Broccoli with Oyster Sauce–because, as Chang acknowledges, it’s what you do in Chinatown. The Oyster Sauce here is the only thing they don’t make in-house, amidst a program of pickling and fermenting and ingredient-crafting.

So is Sai Woo Chinese? Pan-Asian? Fusion? None of the above, according to Chang, whose own youth included days of eating a Jamaican-style breakfast, a burger lunch, and Asian steamed fish and rice for dinner.

“In my mind it’s a Canadian restaurant,” says Chang. 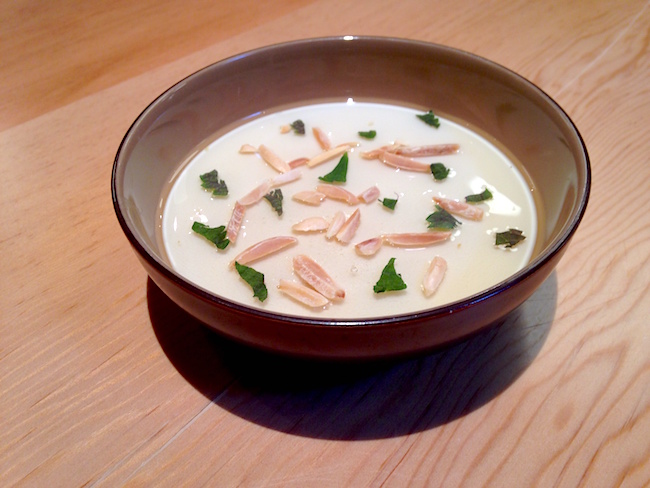 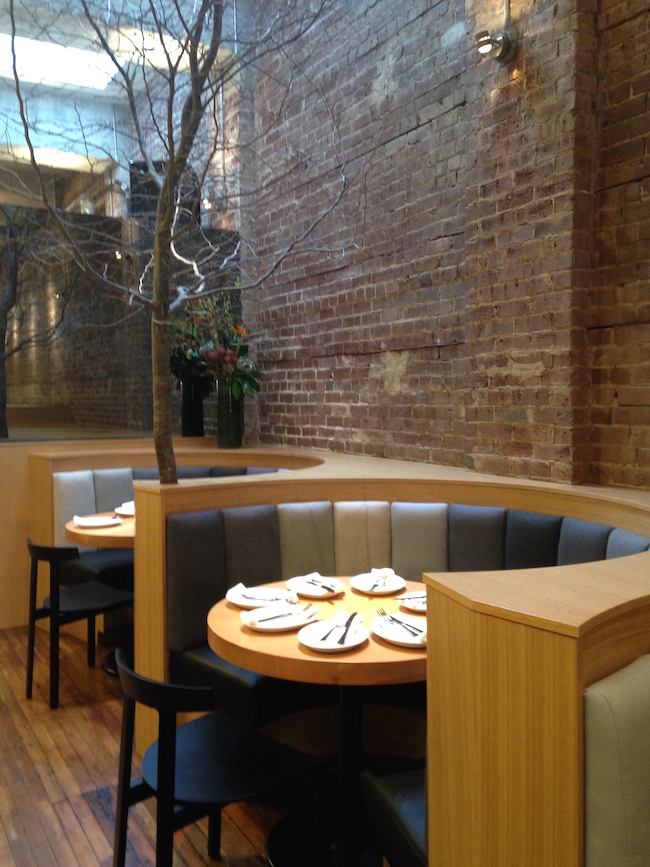 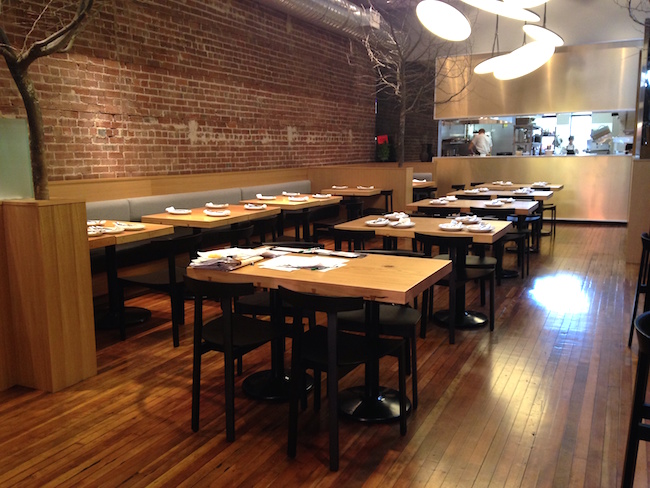