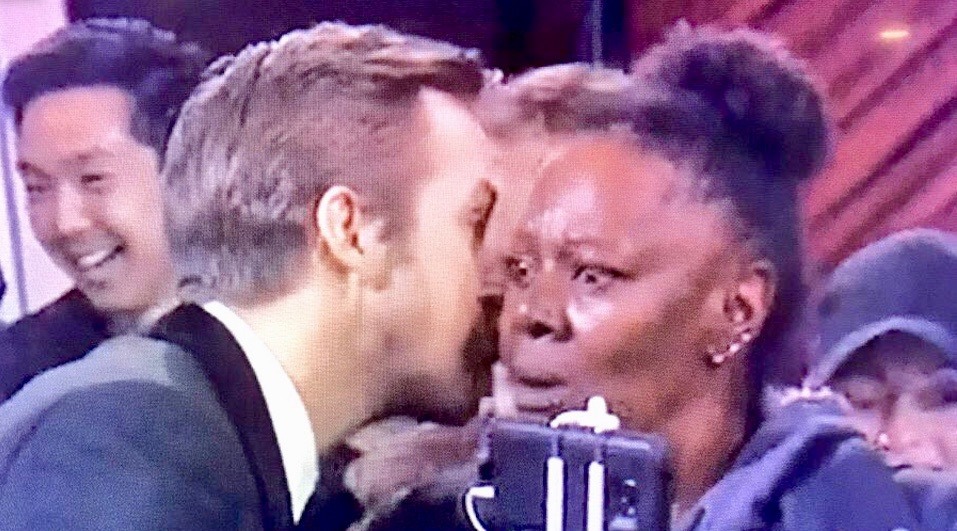 We know, a lot happened at the Oscars last night.

But one of the best things to come out of the night was a half second interaction between Ryan Gosling and a ‘normal’ (as in, not uber famous) woman who had been lead into the Oscars ceremony as part of an elaborate Jimmy Kimmel prank that saw surprised tourists enter the Dolby Theatre mid-way through the Academy Awards ceremony.

So while Gosling did have a pretty wonderful reaction to the mess that was the Best Picture announcement chaos:

It simply wasn’t the best Gosling moment of the night.

That was reserved for Vicki Mines, one of the ‘norms’ lead through the theatre with front row access. Gosling, ever so Canadian (as every Canadian is happy to point out), stood to greet the tour, offering them candy, shaking their hands, and even leaning in for a kiss-meets-possible-whisper:

Of course, Twitter wasted zero time weighing in on just what it was Gosling could have said to Mines. Her priceless reaction certainly helps:

I figured out what happened, #Oscars – it was @RyanGosling pic.twitter.com/oo9Te94WEv

A hot dog is a sandwich pic.twitter.com/CTqQaB5nL7

Even Stats Canada got in on it:

And while it’s quite clear from video that Gosling simply went in for a quick peck on the cheek and likely didn’t say anything at all, that seems irrelevant to Twitter when offered the chance to have another great meme.

Either way, Gosling may not have picked up an Oscar last night, but he did manage to win the Internet.